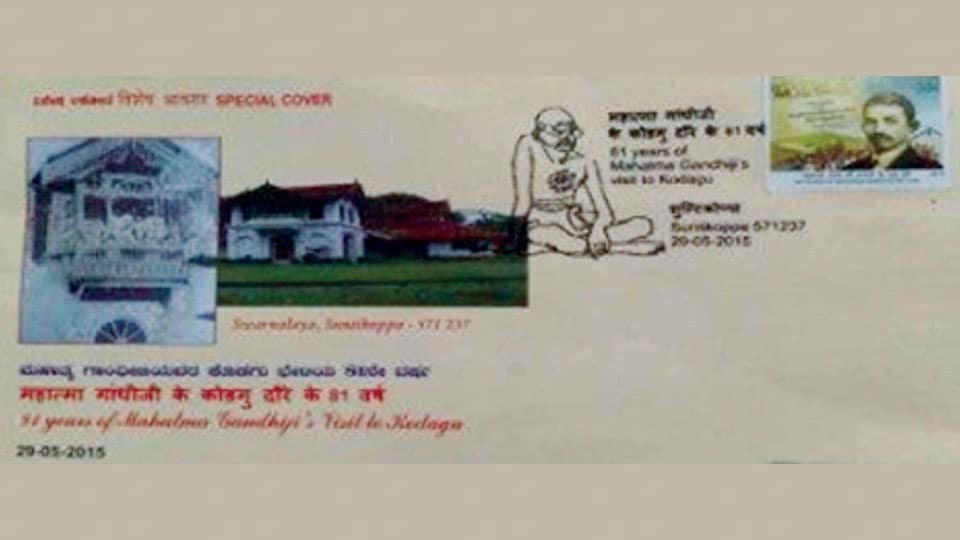 Mahatma Gandhi was always impressed by Kodavas who are hard-working and play a major role in protecting India’s borders. In fact, there are many Kodavas who held and still hold top positions in Defence Forces like the Chief of Army Staff.

Here we recall Gandhiji’s visit to Kodagu. He was camping at Madras (now Chennai). There was a rumour that Gandhiji would visit Bangalore and Mysore. At that time, Pandiyanda I. Belliappa (people lovingly called him ‘Gandhi’ later due to the Mahatma’s visit to his house) was a prominent Congress leader and he was also bringing out a newspaper called Kodagu. He requested Gandhiji to sanctify Kodagu by his visit.

Gandhiji agreed and along with Veeranna Gowda Patil who was the Chairman of Harijana Sangha and others arrived at Gonikoppal on the evening of 22.2.1934. Immediately, he expressed a desire to visit Harijanakeri (where Harijans live). Gandhiji visited Kaikeri, a small village near Gonikoppal. His first programme was to visit the houses of Harijans where more women had gathered than men and Gandhiji spoke for a short while.

The women gathered there collected Rs.25 among themselves and gave it to Gandhiji. He had been garlanded and those garlands were auctioned which fetched Rs. 3. During that time, there was an earthquake in Bihar and Gandhiji spoke about the agony of people and requested contribution, however small it may be and the women immediately gave away their gold ornaments.

Local school students collected Rs. 2 and one ana. From there Gandhiji returned to Ponnampet and again visited Sri Ramakrishna Ashram where he was welcomed by Shambavanandaji. Gandhiji established Harijan Welfare Sangha and he was given a fund of Rs. 220.

While addressing the gathering there, he said that he could not think of living without Dharma. “My Dharma depends upon the support given by men and women who are equal partners. Here, caste should not make its entry at any cost. Dharma means coming closer to God and whatsoever we do should be dedicated to God and this should be nothing but like the clean air we breathe in,” he said.

From there, Gandhiji went to Virajpet where a Muslim leader spoke from the dais in Urdu language. This brought great joy to Gandhiji. He said Hindus and Muslims should live in harmony.

He went to Basavanahalli in Somwarpet and on his way he camped at Siddapura where he was given a donation of Rs. 7. From there he went to the house of coffee-planter Manjunathayya where women donated their ornaments. One woman gave her jewels in the presence of her husband. Gandhiji asked this husband,“What do you say about this donation?” He replied that the ornaments belong to his wife and she is free to use it in whatever manner she wants.

Gandhiji felt happy and asked that man his age and thirty years was his reply. Gandhiji said, “At your age I was not a wise man as you are. Wisdom came to me later.” Everybody burst into laughter. In his short speech, Gandhiji asked them to work hard and make Kodagu prosperous.

He said, “Though travel to Kodagu was tiresome, I am enticed by the natural beauty. Another thing which has given me satisfaction is that there is no untouchability in Kodagu. But Harijans are losing precious land and this should not happen hereafter.”

That night Gandhiji stayed at Madikeri in the house of C.P. Nanjappa. Nanjappa’s wife donated a silver cup and a saucer while Nanjappa donated a gold necklace. The tea-tray made of wood was auctioned and it fetched Rs. 9. In Nanjappa’s house a prayer meeting was held and I.C. Subbayya announced that Rs.2,000 has been given as donation.

Gandhiji stayed that night in Subbayya’s house. He woke up at 2.45 am and wrote letters to Manilal and Susheela. The letter contained a short note — “Tonight we are in Kodagu. It is a small place and its population is 150 thousand. Tomorrow by about six, we descend down and go to Mangalore.”

Meanwhile, some prominent Congress leaders wanted to discuss some political developments in Kodagu. Gandhiji did not permit them and said “I am happy here because there is no untouchability. I have come here to see the activities of Harijans.”

Gandhiji’s visit to Kodagu is special and was worthy of remembrance. This incident had happened about 86 years ago. To commemorate Mahatma Gandhi’s visit, a postal cover was released on May 29, 2015.

Kodagu Mahatma Gandhi Pages from History Prof. A.V. Narasimha Murthy
Is it a prejudiced view by TJS George?
5 Ways to Improve Your Presence on Instagram Organically