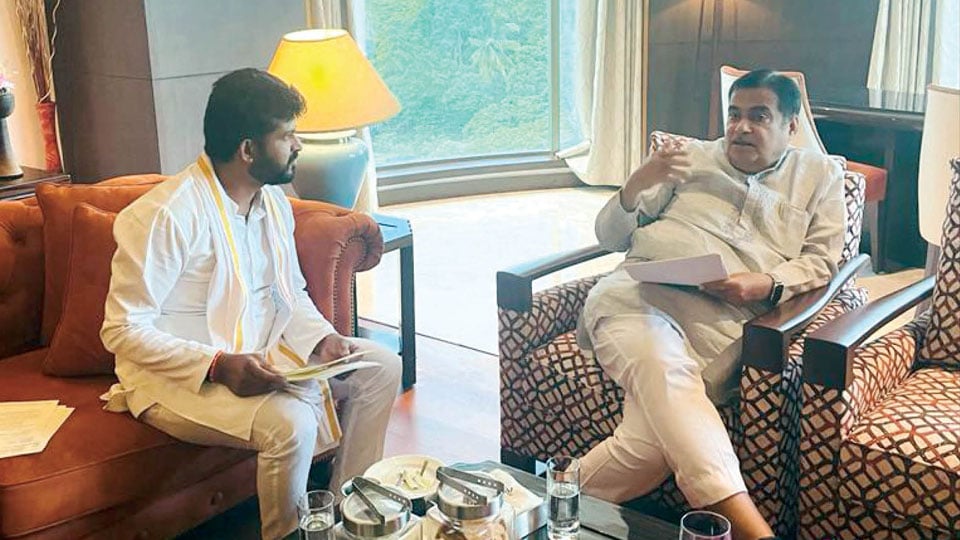 Mysore/Mysuru: Union  Minister for Road Transport & Highways Nitin Gadkari’s visit to Mysuru gave an opportunity for Mysuru-Kodagu MP Pratap Simha to press for several infrastructure projects for which he has already submitted many memorandums. The Minister responded to the MP’s request positively.

Among the projects, the one which is important to Mysuru city is a Road Under Bridge at the level crossing near the Kukkarahalli Lake. The estimated cost of the project is Rs. 40 crore. Road Under Bridge (RUB) at the Level-Crossing of Mysuru-Nanjangud section Railway track running behind Crawford Hall and close to Kukkarahalli Lake will greatly benefit the people of Mysuru, the MP told the Minister.

Once the RUB is completed, it will be a boon for the motorists, who now have to wait a long time at the Level-Crossing Gate. Pratap Simha urged the Minister to execute the project immediately as motorists were forced to wait as most trains running between Mysuru-Nanjangud-Chamarajanagar used to stop on the stretch of the track running behind Crawford Hall, due to delayed clearance at the City Railway Station.

The MP also sought funds to improve or widen the Periyapatna Road (National Highway 275) at Koppa village and Periyapatna town limits for the smooth passage of traffic on the Highway. The narrow stretches are causing traffic bottlenecks and the whole purpose of the National Highway is defeated if the road is not widened, he said.

The MP also urged the Minister to convert the four-lane 23-km Mysuru-Kadakola road to a six-lane Highway. The Mysuru-Nanjangud belt has seen tremendous development over the years and there is a need to provide better connectivity as there is more scope for economic development.

In his letter, the MP has stated that the Mysuru-Nanjangud-Thandavapura stretch has been developed into an industrial hub with many industries including Asian Paints and TVS setting up factories there. Also, there is a 100-acre Women Entrepreneurs Park at Thandya near Kadakola.

In addition, work on Inland Container Depot/ Multi-Modal Logistic Park for Railways at Kadakola by Container Corporation of India is coming up on 61 acres of land, boosting transportation and industrial growth.

This apart, the Mysore Airport located at Mandakalli on National Highway 766 has seen good growth with over seven daily flights and plans are being worked out to make it an international airport with an expanded runway and other features.

Also, the industrial, commercial and tourism vehicles coming to Mysuru and moving towards Ooty and Kozhikode have necessitated the widening of the National Highway to a six-lane one, the MP noted.

The MP urged the Union Minister to convert the existing road into a four-lane stretch from Yedegowdanahalli to Bilikere for the smooth travel of hundreds of people who commute between Mysuru and Hassan.

He urged the Minister to modify the existing road to convert it into a four-lane stretch from Yedegowdanahalli to Bilikere for ease of travel and uniformity of roads. “The existing road is not in conformity with the traffic density and if converted to a four-lane stretch, would provide better connectivity to places of tourist importance besides ensuring safety,” he said.

Pratap Simha also appealed to the Minister to upgrade the State Highway connecting Channarayapatna in Hassan district and Makutta on the Karnataka-Kerala border to a National Highway (NH). The road passes through Channarayapatna, Holenarasipura, Arkalgud, Shanivarsanthe, Kodlipet, Somwarpet, Madikeri and Virajpet to reach Makutta via Perumbadi check post to reach Kannur in Kerala. The NH will extend up to 183 kilometres and Rs. 1,600 crore funding is necessary to upgrade the existing road. He said the road provides connectivity to various tourist destinations including Madikeri, Talacauvery and Bhagamandala. Development of the highway would also ease the connectivity to Kannur International Airport from Kodagu and Hassan districts.

The MP said that the alignment plan was submitted in 2018 and pointed that the movement of freight from Kodagu to other regions was affected which had affected the economy of Kodagu.