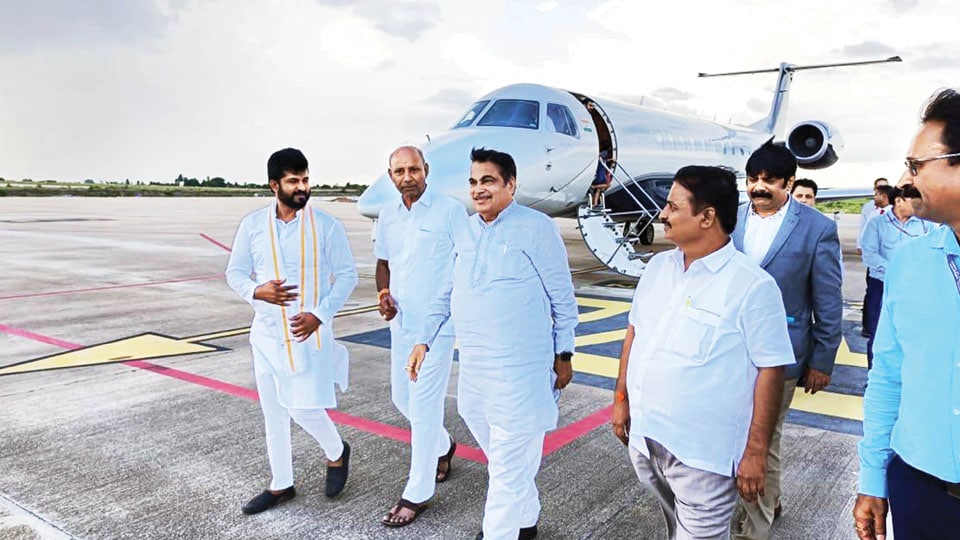 Mysuru/Madikeri: Union Minister for Road Transport and Highways Nitin Gadkari and his family are on a tour of Mysuru and Kodagu. After winding up his engagements in Mysuru, the Union Minister will arrive at Pollibetta today afternoon and stay in Kodagu till June 13.

Gadkari is accompanied by his wife Kanchan Gadkari and a few family members. Sources said that his Kodagu visit is strictly private. Last night, the family stayed at Radisson Blu Plaza Hotel in city.

Today noon, the Union Minister reached Suttur Mutt along with Pratap Simha and took the blessings of Sri Shivarathri Deshikendra Swamiji. Though the Minister was scheduled to reach Suttur Mutt at 10 am, it was delayed by two hours as his family had been to the Mysuru Zoo.

Nitin Gadkari had a closed-door meeting with the Swamiji and he refused to speak to reporters and just mentioned that it is his private visit and he should not be quoted on any issues. However, after coming outside, he was heard saying to the Swamiji that the Centre will soon introduce ethanol-blended petrol.

India can save thousands of crores of rupees in foreign exchange worth of fuel imports through the use of 10 percent ethanol-blended petrol, Gadkari told the Swamiji. The initiative has led to sizable benefits for farmers, he added.

Calling Mysuru a beautiful city, the Union Minister lauded the efforts of Suttur Mutt in providing food, shelter, health and education to thousands of students.

Gadkari and his family are scheduled to reach Pollibetta today afternoon and will stay at Thaneerhulla Bungalow in Pollibetta, owned by Tata Coffee Plantations which is now being offered as a home stay.

On June 10, the Union Minister and his family will proceed to Taj Madikeri Resort & Spa and stay there till Monday. The family will return to Nagpur on Monday morning, sources added. From Madikeri, they will travel to Mysuru by road and take the chartered flight to Nagpur.

There are plans for his family to go on a wildlife safari either in Nagarahole Tiger Reserve or Bandipur Tiger Reserve. Sources said that the Union Minister’s tour schedule is managed by Pratap Simha.

Yesterday in Mysuru, the family visited the Mysore Palace and went around the iconic structure along with MP Pratap Simha. They were accorded a warm welcome and felicitated by Mysore Palace Board Deputy Director T.S. Subramanya.

Before visiting the Palace, the Union Minister and his wife went to Karnataka Silk Industries Corporation (KSIC) outlet in Vidyaranyapuram and saw the vast selection of silk sarees. In fact, his wife Kanchan Gadkari was bowled over seeing the designs, master craftsmanship and colours. The Minister helped her in selecting some sarees.