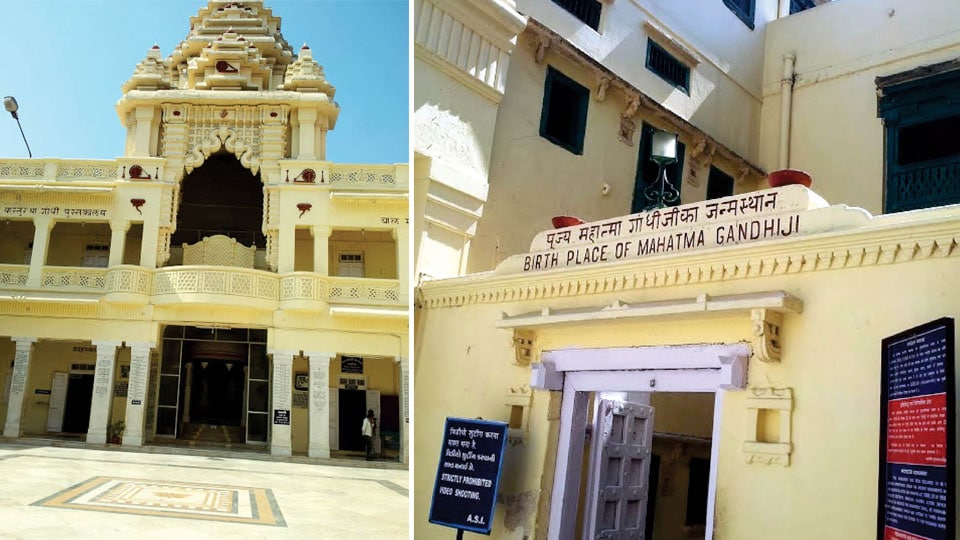 Remembering Gandhiji through snapshots and anecdotes

On October 2nd, we celebrated Mahatma Gandhi’s 150th birth anniversary and a number of year-long programmes were organised all over the country. Yet, how many of our readers have personally visited this great personality’s birth place?

To create a feeling of pride and patriotism in our younger generation, especially, I wish to enable SOM readers to visualise the birth place and the house (Kirti Mandir) in which the great Mahatma was born and brought up. Having visited Porbandar recently, I herewith relive the experience through these snapshots.

When we said we are from Mysuru, the caretakers were very happy as they had heard a lot about Dasara, the Maharajas, Palaces and Brindavan Gardens.

I left a short message behind in the visitor’s book that we Mysureans have taken a pledge to keep our city clean, safe and green.

As we all know, Mahatma Gandhi helped free India from British rule by using a unique method of non-violent resistance. He had limitless strength, both physical and moral. He believed in courage, truth and non-violence.

With his 150th birth anniversary being celebrated this year, talk about Gandhiji and all that he stood for fills the air, and not just in India, but in many other countries as well.

Over the past few months, people of various other nationalities have been singing “Vaishnava Janato”, which is known to be one of Gandhiji’s favourite bhajans. I heard this news snippet in a programme on Doordarshan, which mentioned that performances in Portugal, UAE, China and Japan, to name a few, were spectacular.

All India Radio, for the past many years, has had a Kannada programme on Friday mornings dedicated to Gandhiji, his teachings and experiences. In October this year, in honour of his landmark birth anniversary, AIR aired a 5-minute talk about Gandhiji every morning at 6.30 am.

On October 2nd, 2019, there was an interesting programme on Doordarshan that interviewed a few people from across the world.

One lady who was interviewed was Canadian and recalled her mother getting her to read about Gandhiji to learn about him and his work. She was very impressed by the following passages: “My life is my message”, “Truth is God, and God is truth” and “Hate the sin, not the sinner.”

Another interviewee, an Indian lady, recalled reading about Gandhiji travelling India after he returned from South Africa. He wanted to get to know India and her people, which led him to travel to villages along with a few of his followers. In a village in Bihar, Gandhiji saw an old woman sitting alone outside a shabby hut. He spoke to her and learned that she lived with her daughter, whom he requested to meet. The woman went in and after a little while, her daughter emerged from the hut. Curious as to why the woman stayed inside, he requested one of his followers to find out. He then learned that both mother and daughter owned and shared only one sari. This opened his eyes about the poverty in India.

Gandhiji visited Madurai, and seeing the poverty there as well, he vowed to change his attire to identify with the poorer masses. On 22nd September, 1921, he appeared wearing a dhoti and shawl for the first time in public, and this was his attire for the rest of his life. There has been a statue erected there to honour this action.

Gandhiji spent some time in jail in South Africa. The jailor at the time, Jan Smuts, was known to be very strict. News had gone around that his birthday was round the corner and Gandhiji put to use a skill he had picked up in jail — shoe- making. So he stitched Smuts a pair of sandals. His jailmates expressed their surprise, to which Gandhiji replied that Jan Smuts was doing his duty, and what he was doing was his dharma.

On Gandhiji’s 70th birthday, Smuts wrote, “In jail, he prepared a pair of sandals for me. I have worn them for many a hot summer, though I feel that I am not worthy to stand in the shoes (made by) so great a man.”

On January 30th, 1948, the then UN Secretary General, Trygve Lie, ordered that all the UN countries (58 at the time) should follow the UN’s suit and fly their flags at half-mast. When asked why, he said, “Gandhiji was not only the light of India, but the light of the whole world. I am not sorry that he has passed away, but I am sorry that with him, human values have also gone.” What a great tribute!

A recent application of a Gandhian saying is Prime Minister Modi’s Swachh Bharat Mission. This mission follows Gandhiji’s quote “Cleanliness is next to Godliness.”

Gandhiji was a man from whom we can all learn several positive things. We should all try to imbibe some of his lessons and teachings. It seems like a fitting way to honour his legacy.