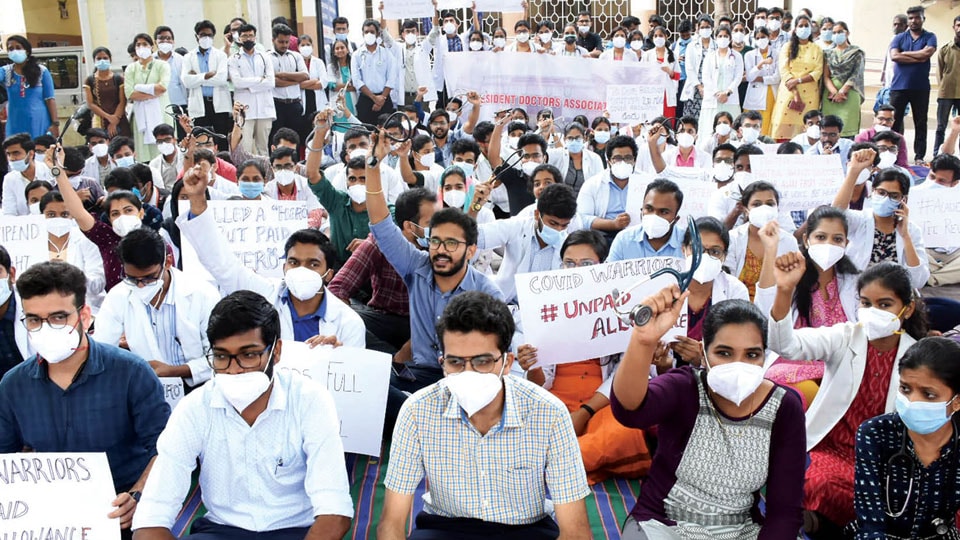 Resident Doctors on strike for third time in two months

Mysore/Mysuru: Accusing the Government of not keeping its promise on fulfilment of their demands, nearly 600 Resident Doctors attached to Mysore Medical College and Research Institute (MMC&RI), began an indefinite strike in K.R. Hospital premises  here this morning.

The strike, as part of a State-wide demonstration, is organised under the aegis of Karnataka Association of Resident Doctors (KARD), an association of House Surgeons, Post-Graduates and Super-Speciality residents of Government Medical and Dental Colleges of Karnataka.

This is the third time that Resident Doctors are on a strike in just over a month and the second one this month (November) alone, to seek  fulfilment of their demands, which chiefly included consideration of restructuring the academic fees according to 2018-19 year, payment of COVID risk allowance and timely payment of stipend to Post-Graduates and Interns, among others.

The striking doctors today said that in May 2021, when the  second wave of COVID pandemic struck the country, the Karnataka Government announced COVID allowance of Rs.10,000 per month starting from the month of April, to all resident doctors of the State. But it has been more than six months since the day of announcement and yet the Government has not released the funds. This shows the blatant disregard towards the doctors who served as frontline warriors risking their own lives, they said. This apart, the academic fees was abnormally and illogically hiked from Rs. 30,000 to Rs.1,20,000, which is a whopping 400 percent hike. To make matters worse, they were made up to pay the entire sum in one go without any concession, they maintained.

Continuing, they said that following the assurance from Health and Medical Education Minister Dr. K. Sudhakar that their issues will be resolved  within 10 days, they had called off their stir, which had begun in K.R. Hospital premises  from Nov. 9, on the fifth day.

However, it is unfortunate that the assurance given by the Health Minister has not been fulfilled till date. To add to their woes, the resident doctors were excluded from the package of COVID-risk allowance announced recently by the Government of Karnataka,  they contended.

Urging the Government to immediately fulfil their charter of demands which included payment of COVID allowance, timely payment of stipend for PGs and Interns, consideration of restructuring of academic fees according to 2018-19 academic year and expediting the process of NEET PG counselling, they warned of intensifying their indefinite stir in the coming days, if their demands, are not met.

Following the launch of the stir, medical services in  MMC&RI attached K.R. Hospital, popularly known as Doddaspatre among the rural masses, took a hit with OPD services, IP treatment protocols and elective surgeries (excluding emergency services) getting affected. The resident doctors had first launched the stir in Oct. 2021 and again on Nov. 9. Today’s stir is the third one in over a month.