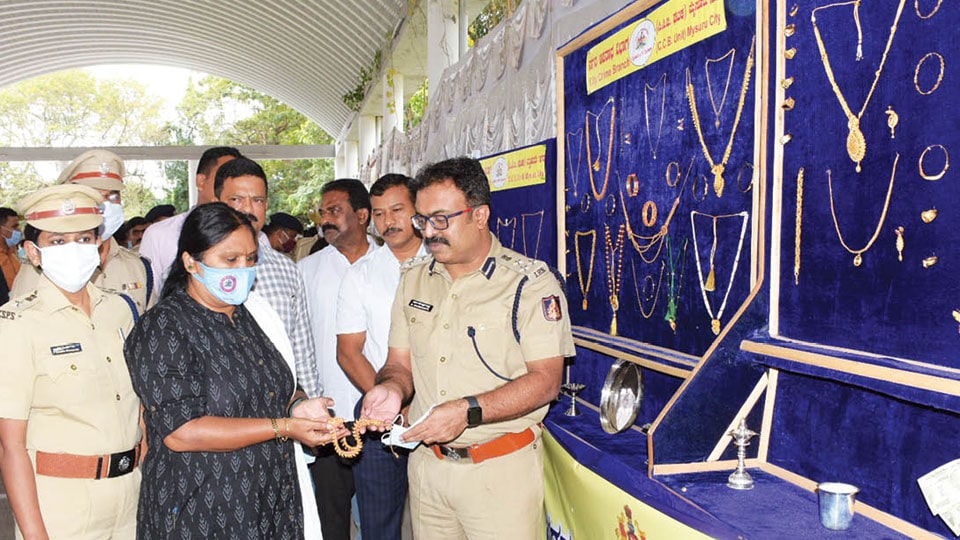 Mysore/Mysuru: The Mysuru City Police held a property parade at City Police Commissioner’s Office here this noon pertaining to the recovery of stolen properties that were stolen from November 2020 to November 2021 in city and to hand over them to the owners .

Addressing media persons, City Police Commissioner Dr. Chandragupta said that during Nov. 2020 to Nov. 2021, a total of 676 cases were registered in which cash and properties worth Rs. 7.34 crore were stolen. Out of the total 676 cases, the Police have solved 374 cases and recovered properties worth Rs. 5.06 crore.

The Police had registered a total of 676 cases which included four dacoity (all solved), 29 extortion (17 solved), 50 chain snatchings (34 solved), 132 robberies (47 solved), 18 house burglaries (nine solved), nine burglaries by house helps (five solved), 330 vehicle thefts (212 solved), 88 petty thefts (35 solved), 11 cattle thefts (six solved) and fives cases under KF Act were registered out of which all five cases have been solved. In all, the City Police have solved 374 cases out of the total 676 cases and have recovered stolen properties worth Rs. 5.06 crore, the City Top Cop said. The recovered stolen properties were displayed at the property parade at the Police Commissioner’s Office premises and the valuables were handed over to the owners after verifying the documents. Deputy Commissioners of Police (DCPs) Pradeep Gunti (Law and Order) and M.S. Geetha Prasanna (Crime and Traffic), Inspectors and staff of all Police Stations across the city were present.