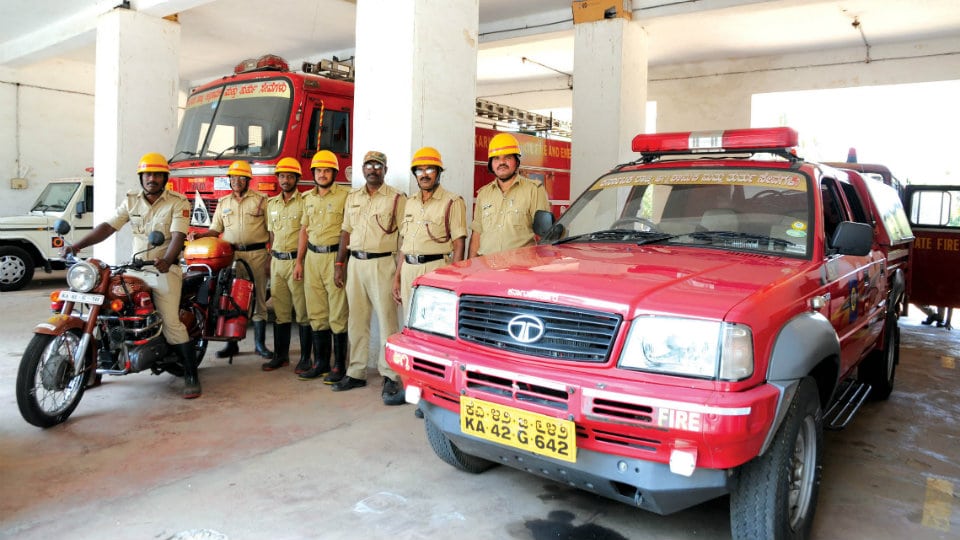 The rise in mercury level this year across the district is posing a challenge to Fire and Emergency Services Department, which plays a prominent role in handling natural calamities and tragedies in all seasons, particularly in summer.

Fire incidents were also reported from various parts of the State including in Bandipur, Chamarajanagar district, Chamundi Hill and others parts of the Mysuru district resulting in huge loss of flora and fauna in large swathes of land.

However, the department personnel of Mysore Region who are equipped with all fire fighting apparatus, gadgets and other devices are well prepared round the clock to douse the fire after receiving the information.

Other than these, the department also has a 9,000 litres capacity water tanker, 16,000 litres capacity Water Bowser Tanker and other modern fire fighting vehicles used to rescue victims of building collapse incidents. The district fire brigades have deployed adequate officers and staff providing their due service.

The officers and staff of the Fire Brigade are ready to face any situation and give their service even on their holiday if need. Though there is enough manpower in all the stations, at the time of emergency, the stations have been intimated to take assistance from neighbouring stations also.

People and Police provide information about fire incidents to the Fire Stations and the Fire personnel will make haste to the location where a fire has taken place, judge the requirements of the situation and if necessary take assistance from the people to douse the fire and also rescue people.

The ladder is another important equipment of a fire truck. There are a various types of ladders  including the turntable ladder, tower ladder and the tiller ladder, all of which are mounted on the fire truck. Small ladders are also equipped on fire trucks which can be moved and carried by fire-fighters to gain entrance to buildings or to help people in need of being rescued.

Fire-fighter’s breathing apparatus is an essential part of fire truck equipment. The Self Contained Breathing Apparatus (SCBA) allows fire fighters access to oxygen and prevents them from inhaling toxic smoke.

The SCBA consists of three parts — a high-pressure tank of 2,200 to 4,500 psi, a pressure regulator and a face mask or mouthpiece. These components are mounted on a frame that allows the fire-fighter to remain mobile and active while using it.

The Fire Station is also equipped with the most advanced Quick Response Vehicle (QRV). Officials said that a proposal has been submitted to the State Government to set up Fire stations at Bannur, Kadakola, Saligrama, and Bettadapura in Mysuru district.

The department has also submitted a proposal for procurement of ‘Aerial Ladder Platform’ which is a latest form of equipment used to handle fire tragedies occurring on multi-storied buildings.

With the help of this equipment, rescue operations can be carried out at a height of 90 meters. The equipment costs around Rs. 5  crore and the government has considered this proposal seriously and is likely to sanction for the city.

READ ALSO  Power supply, billing to be digitised in Mysuru

Speaking to Star of Mysore, Chief Fire Officer (CFO), Yunus Ali Kauser said “The city has recorded a spurt in temperature level. Mysuru has a good number of heritage buildings, elevated buildings, forests and other important places of tourist interests. As soon as a complaint is received, a fire extinguishing vehicle along with fire personnel are sent to the spot to conduct operation against the fire. There is no dearth fire fighting equipment or water. Our Department officers and staff played an important role in fighting fire during the major fire mishap at Bandipur Forest. Even now, we have stationed our personnel and fire fighting vehicles in the forest.”

Sourcing water is a tough task during emergencies as fire tenders have to rush to Vani Vilas Water Works (VVWW) to refill the tankers whenever water gets exhausted. A lot of time is wasted here as the fire tenders will have to rush to VVWW from the place of emergency to refill water. “The Mysuru City Corporation should provide us with Water Hydrant System (water filling points) at vantage points in city so that we can refill the tankers and rush back to douse the fire,” says District Fire Officer K.P. Gururaj.

Officials said that they have also recommended the State Government to set up a Fire Station exclusively at Mysore Palace premises on the lines of Vidhana Soudha, Vikasa Soudha, in Bengaluru.  Moreover, the iconic Palace witnesses lakhs of tourists every year. The Palace is adorned with lakhs of bulbs for illumination. Also, it houses rare oil paintings, dresses of kings and queens and also houses Dasara elephants for more than three months during Dasara festivities and the world famous Jumboo Savari. Keeping all this in mind, the department had sent a proposal for an exclusive Fire Station, but the government has rejected this proposal saying that city is having three Fire Brigade Stations.