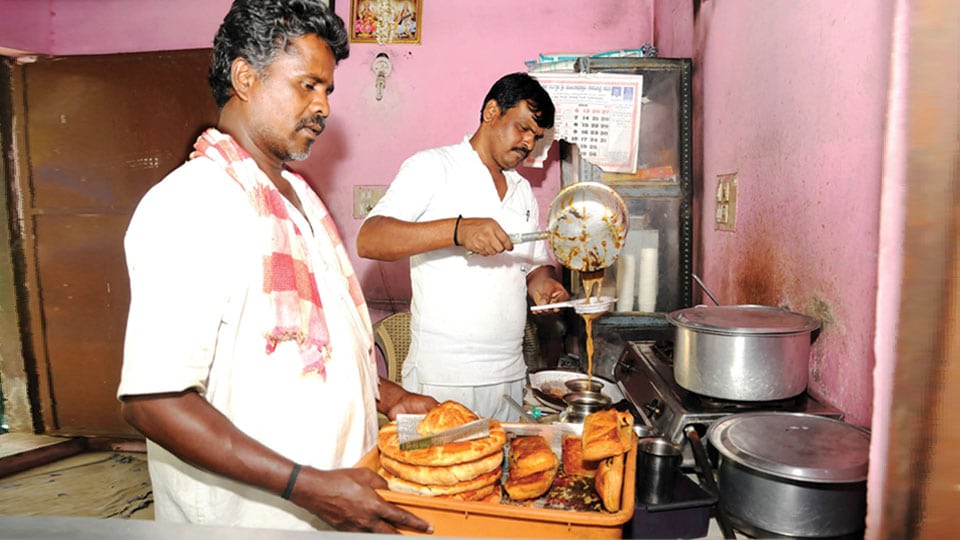 Jail Bakery: Where taste travels from barracks to party tables

Residents of Mysuru are getting a taste of culinary skills of jail inmates as bakery products prepared by them are available at the bakery located at the jail premises on Ashoka Road. And for the prison inmates, the bakery kitchen is their training ground and they have now turned into full-fledged bakers who are testing their baking skills in the open market.

Established in 2012, the “Parivarthana Products” was inaugurated on Aug. 6, 2012 by the then Additional Director General of Police K.V. Gagandeep. The bakery products are a big hit along with tea and coffee. A lot of people go there to have snacks at regular intervals.

Initially, the bakery served over 1,000 inmates of the jail and later, it was open to the public. The bakery serves snacks including bread, buns, a variety of biscuits, egg and veggie puffs, dilpasand, rusk and a host of sweet and spicy mixtures.

The bakery is open from 7.30 am till 8 pm every day and the products are sold under Parivarthana brand. Snacks and bakery products are sold at much cheaper rates than outside the market and there is no compromise either in the quality of the finished product or in the materials that are used to make the products.

The aim of establishing the bakery is to transform the minds of the inmates and lead them away from the path of crime. This is to give them a message that they are a part of the society and even they can make tasty food, said Jailor Ashok R. Bhajantri.

He said that a set of cows were being reared inside the jail to supply milk for the bakery products but due to the scarcity of feed and fresh grass, this practice was abandoned. The bakers, who are preparing the items, were trained by experts. They start their day at 7 am and wind up at 4.30 pm, and hope to create their own signature products in future.

The inmates prepare baked products including birthday cakes and sell them at competitive rates without compromising on quality and taste. A part of the income generated out of the profits out of the sale is credited to the accounts of the inmates who work in the bakery and 50 percent of that income is handed over to the families of inmates every month. The remaining 50 percent is collected and the corpus is handed over to the inmates who are released as a payment to start a new life, Bhajantri added.

The sheds where jail inmates carry out professional works like carpentry, painting, handicrafts, soap and agarbathi manufacturing are in a dilapidated condition and as such 16 new sheds will be constructed. While 8 sheds will come on the ground floor, the remaining 8 will come up on the first floor. These sheds will have all the facilities for the jail birds to make products and sell them in the open market.

As of now, only bakery products are sold near the jail premises. Soon, products that are made inside the jail including jamkhana, bed sheets, handkerchiefs, carpets, yoga mats and other products will be sold at two shopping outlets next to the bakery, Bhajantri said.