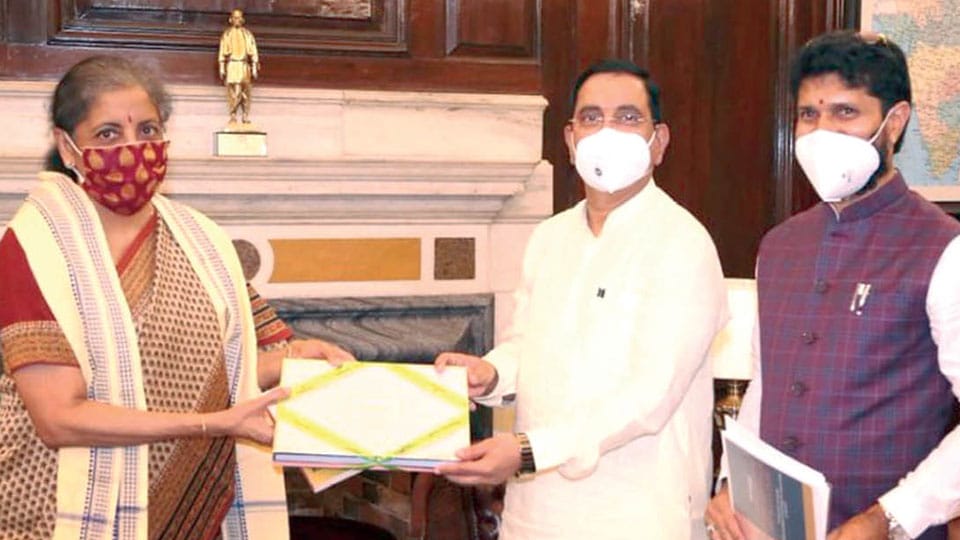 Chorus grows to set up Heritage Institute in Mysuru

Mysore/Mysuru: There is a growing chorus in favour of establishing Indian Institute of Heritage and Conservation (IIHC) with the status of a Deemed University under the Ministry of Culture in the Heritage City of Mysuru. Tourism stakeholders, archaeology experts and heritage advocates are pitching for the institute to be set up in Mysuru.

The Ministers apprised Nirmala Sitharaman that there was sufficient land available for the proposed IIHC in Mysuru and the State Government was ready to provide the necessary support for the institute.

Mysuru is a centre place for all heritage sites in South India. The city also offers an engaging and meaningful environment for heritage conservation for future generations, Joshi and Ravi argued. The IIHC will enable trained, qualified persons to conserve manuscripts, including monuments and museums, they told the Finance Minister.

In her last Budget speech, Nirmala Sitharaman had said, “Acquisition of knowledge in disciplines such as Museology and Archaeology are essential for collecting and analysing scientific evidence of such findings and for dissemination through high-quality museums. Currently, lack of trained manpower is a handicap for both these disciplines. This also affects tourism.”

The proposal put forth by Ministers Pralhad Joshi and C.T. Ravi for the establishment of IIHC is buttressed by the fact that Mysuru is home for innumerable archaeological sites, heritage monuments  and structures. Also, iron implements, a Roman coin mould along with a kiln and antique pottery from Megalithic and Neolithic ages have been found in Mysuru region.

Speaking to Star of Mysore, Prof. N.S. Rangaraju, who is a Member of Expert Committee for Development and Protection of Mysore Heritage Region and Convenor, INTACH (Indian National Trust for Art and Cultural Heritage), said that Mysuru, with its rich and evident history from Satavahana, Ganga and Wadiyar periods, is an ideal place to establish IIHC.

“This is the precise reason why during the term of Chief Minister S.M. Krishna, Mysuru, along with Srirangapatna, was declared as a Heritage City in 2004 and an exclusive office for Heritage was created.

Earlier, it was just Archaeology Department and Heritage and Museums were added and a Commissionerate was established in Mysuru. The  present Chief Secretary T.M. Vijay Bhaskar was the first Heritage Commissioner,” he said.

Mysuru city and region has places including Srirangapatna, Talakadu and Somanathapura that have innumerable temples and heritage sites. “Excavations on the banks of River Cauvery have yielded artefacts from Megalithic and Neolithic ages. Places like Koppa, Hemmige, T. Narasipur and Krishnapur are known for ancient civilisation. The region, with more than 500 archaeological and heritage structures and over 100 buildings that are more than 100 years old, has a good scope to establish an International Museum of repute to draw tourists,” Prof. Rangaraju explained.

“Mahatma Gandhi visited Mysore five times and the British had awarded Nalwadi Krishnaraja Wadiyar, Mummadi Krishnaraja Wadiyar, Jayachamaraja Wadiyar and 10th Chamaraja Wadiyar with the honour Knight Grand Commander of the Most Exalted Order of the Star of India (GCSI). All these and exclusive items like Mysore Pak, Mysore Silk, Mysore Mallige, Mysore Vilyadele, Clean City status, 14 Palaces and over 25 Museums all qualify Mysuru as the most eligible Heritage City to have  Indian Institute of Heritage and Conservation,”   Prof. Rangaraju said.

Mysuru has good and broad roads dotted with heritage structures and the city sees a footfall of more than 80 lakh  tourists per year.

“Establishment of IIHC would save the heritage structures as there will be good flow of funds. Conservation expertise will be readily available. An added advantage is the pleasant climate and a good hospitality industry,” he added.