Home » News » Bronze Statue of Sqn. Ldr. A.B. Devayya to be unveiled at Madikeri on Sept. 7 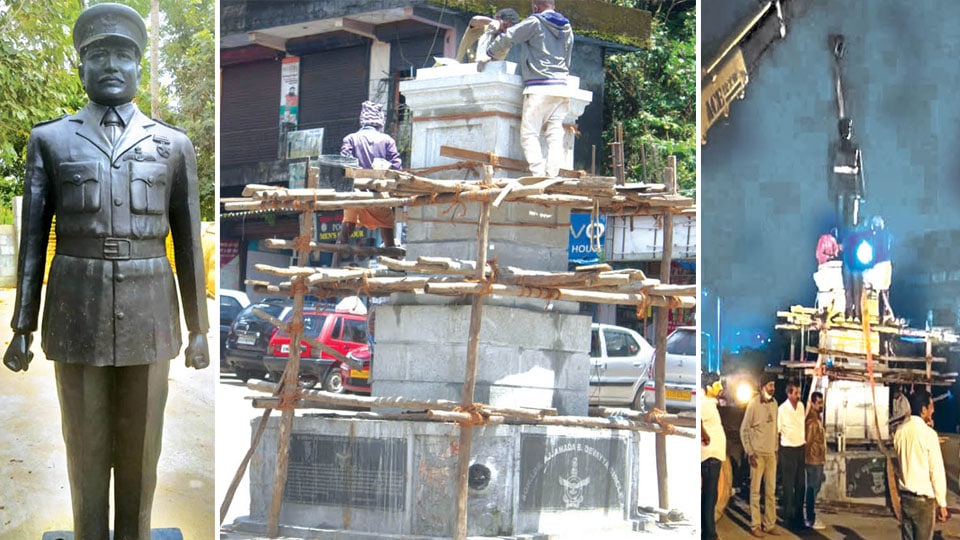 Bronze Statue of Sqn. Ldr. A.B. Devayya to be unveiled at Madikeri on Sept. 7

Madikeri: The statue of Squadron Leader Ajjamada Bopayya Devayya will be unveiled at Madikeri in Kodagu District on Sept. 7.

The 6-feet-9-inch bronze statue installed at the Old Private Bus Stand Circle will be unveiled on the day Devayya was martyred. Incidentally, the Circle has also been named after him.

Sqn. Ldr. A.B. Devayya is the only Indian Air Force (IAF) Officer to be posthumously awarded the Maha Vir Chakra (MVC). During the 1965 India-Pakistan War, Devayya (called ‘Wings of Fire’) was part of a strike mission (on the Pakistani airbase Sargodha).

The work on the statue basement is almost complete and a giant crane was used to shift and mount the statue on the pedestal.

The bronze statue weighs 600 kg and Rs. 20 lakh has been spent on getting the statue carved at Kengeri near Bengaluru.

Sqn. Ldr. A.B. Devayya was born to Ajjamada Bopayya and Neelamma couple on Dec. 24, 1932 at Manchalli village near Kutta in South Kodagu. He joined the Indian Air Force as a pilot on Dec. 26, 1954. Devayya was married to Keethiyanda Sundari.

When the Indo-Pak war broke out in 1965, Devayya was an instructor at the Air Force Flying College. He was posted to No.1 ‘Tigers’ Squadron’ and flew the Mystere fighter bomber. During the war, Devayya shot down a US-made PAF (Pakistan Air Force) F-104 Starfighter while flying an inferior Mystere of French make. The dogfight between the Mystere and the Starfighter was recorded by British author John Fricker in his book ‘Battle for Pakistan’ published in 1979.

READ ALSO  As Kodagu braces up for another monsoon... Sound of thunder makes Kaloor villagers shudder

Action in the skies

John Fricker wrote, “On Sept. 7, 1965, Mystere pilot Squadron Leader A.B. Devayya showed commendable courage by staying in the fight, and despite being mortally wounded, he eventually scored several cannon strikes against the Starfighter, causing it to be abandoned. This was the first and only Starfighter to be lost through enemy action in the 1965 war.”

Devayya was part of an air strike mission on the PAF base at Sargodha, with the objective being to neutralise its air assets. He engaged in a dogfight with the Starfighter flown by Pakistani Flight Lieutenant Amjad Hussain at an altitude of 7,000 ft. The PAF fighter was faster and more modern, but Hussain made the mistake of reducing his speed in an attempt to out-turn Devayya.

Hussain failed to clear his tail during the dog-fight and suffered several cannon strikes. He was forced to eject since the Mystere had a limited range for action and did not have enough fuel reserves to return to India.

The Mystere aircraft was destroyed and it was assumed that Devayya died on Pakistani soil. The IAF was not aware of what had happened to Devayya, first recording him missing and later declaring him dead. It was revealed much later by Pakistan that Devayya’s body was found almost intact by villagers not very far from Sargodha and buried.

Two Defence personnel from Kodagu have so far received the honour of Maha Vir Chakra, next only to the supreme Defence award Param Vir Chakra. While Squadron Leader A.B. Devayya received the honour in 1988, the other officer is Major Puttichanda Somaiah Ganapathy (later promoted as Lieutenant Colonel) who is now leading a retired life in Bengaluru.

Major Ganapathy was awarded Maha Vir Chakra for his combat role in 1987 Operation Pawan in Sri Lanka (launched by Indian Peace Keeping Force) against the LTTE. His unit, located at Annakottai, was surrounded and repeatedly attacked by militants on Oct. 16, 1987. His Company had occupied this location to provide a firm base for the 41 Infantry Brigade to launch an offensive.

LTTE militants repeatedly attacked the position with very heavy fire, resulting in heavy casualties, and his unit required immediate replenishment of ammunition. Throughout the day, Major Ganapathy fought gallantly and kept the militants at bay.

When all efforts to drop ammunition by helicopter failed due to heavy fire, Major Ganapathy kept fighting, moving from trench to trench till 6 am on Oct. 17, 1987 when he was finally supplied with ammunition by a patrol. He displayed extreme devotion and held his position against heavy odds.

ONE COMMENT ON THIS POST To “Bronze Statue of Sqn. Ldr. A.B. Devayya to be unveiled at Madikeri on Sept. 7”