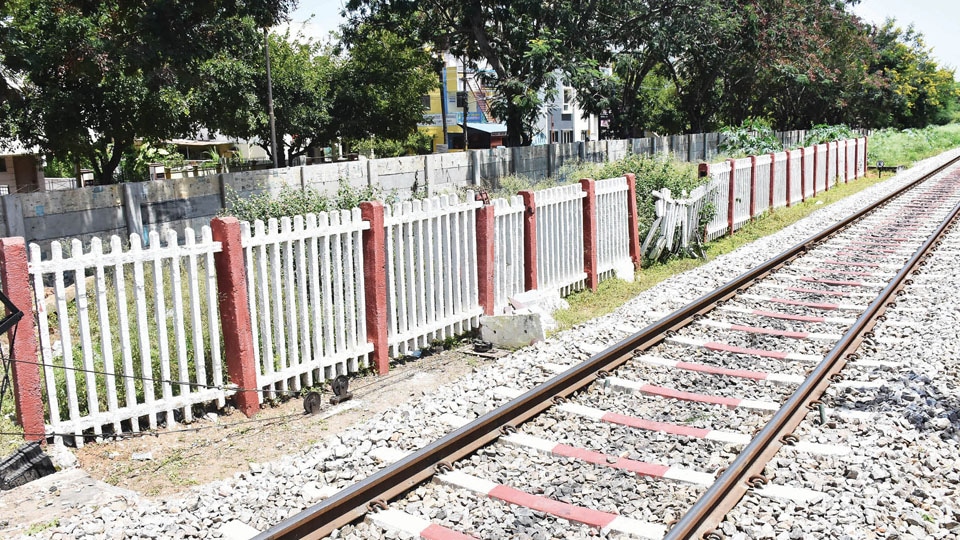 Mysore/Mysuru: In an effort to secure its landed properties along tracks from probable encroachments, the Mysuru Division of South Western Railway (SWR) has begun securing of Railway tracks coming under its jurisdiction, by construction of walls and railings.

The Railway Department is said to have taken this measure to secure and safeguard its properties for future plans such as Track-doubling or other   Railway works.

Following a circular from the Railway Board, which had directed all Railway Divisions to take measures for prevention of landed properties along railway tracks from encroachments, the Mysuru Division of SWR has started the job in right earnest by taking up wall construction work on one side of the track on the stretch from Jayanagar Railway Gate to Ashokapuram Railway Station on Mysuru-Nanjangud-Chamarajanagar section.

Prior to the construction, the Civil Engineering wing of the Department had carried out a pin-point survey to identify the properties and appropriately mark them.

Following a study that the Railway landed properties on the  near 3-km stretch from Jayanagar Railway gate to Ashokapuram Railway Station, which forms part of a populous residential area, are prone or vulnerable to encroachments with the setting up of petty shops, make-shift sheds, dumping yards and the like, the SWR has began construction of a wall on one side of the track that  is more prone to encroachment, according to sources. The  Railways is taking up four types of track-securing depending upon the geographical  features and space availability.

While one is construction of a wall, the others are erection of Railway track barricades, deep-rooted  chain-fencing and piling up of loose stones. The piling of loose stones will be taken up only along the tracks passing through agricultural fields, so as to enable movement of farmers to their fields, the sources further said.

Meanwhile, the SWR  Mysuru Division is learnt to have completed securing of the railway track from the stretch of Yadavagiri to Goods Shed terminal on Mysuru-Bengaluru section by erection of railings.