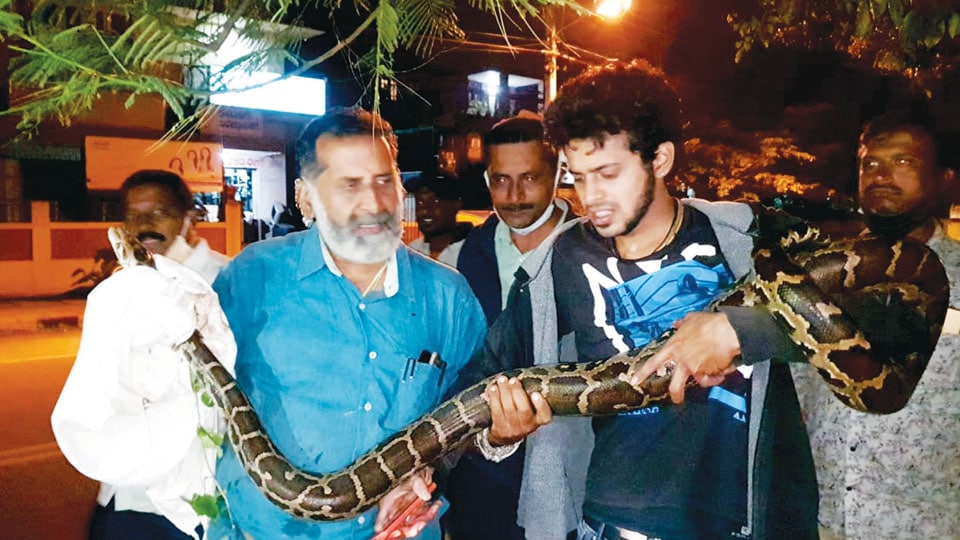 Mysore/Mysuru: An eight-feet long Indian Rock Python was caught at Kuvempunagar last night. The snake had crossed a road inside the E&F Block and had taken shelter under a bush. While snakes of different species have been caught inside the city, it is probably for the first time that a python has been caught inside a residential area in the recent past.

The snake was spotted slithering on the road at around 9.30-10 pm by Ramesh and his friend Jagadish while they were walking on the road in Kuvempunagar E&F Block, opposite Kuvempu Cable Network. It was over seven to eight feet. They got scared as it was a giant snake. The road is usually busy too and last night was no different.

Soon, people gathered at the place and the snake entered a 80X100 vacant site that was full of wild growth. People called former Corporator Balasubramanya, also popular as Snake Shyam, who told them that looking by the description, it might be a viper but not a python. But people told him that it was a giant snake and it had entered the vacant site. Snake Shyam rushed to the spot along with his son Suryakeerthi. As the area was pitch dark and no torches were available at that point of time, people and walkers flashed lights from their mobile phones.

After search amidst thick wild growth, the python was spotted taking shelter under a Calotropis procera – Rubber Bush (Yekkada gida in Kannada). Snake Shyam and Suryakeerthi successfully pulled out the snake and displayed the reptile before the public for some time. The snake will be released to nearby forest.

Snake Shyam told Star of Mysore that it was his 36,100th catch. “My counted catch is 36,100 but uncounted snake catches have reached 75,000,” he said and added that it was his 15th python catch in the last six to seven years.

Shyam said that due to heavy rain, the snake would have entered the city through a drain and got lost in residential areas.

Indian Rock Python (Python molurus), commonly recognised as Indian Python, is considered as one among the list of larger size non-venomous snakes which is widely distributed all through Indian subcontinent. Usually nocturnal, it is commonly found on the ground or dangling from a tree branch, resting or waiting to ambush prey, camouflaged well by its markings.