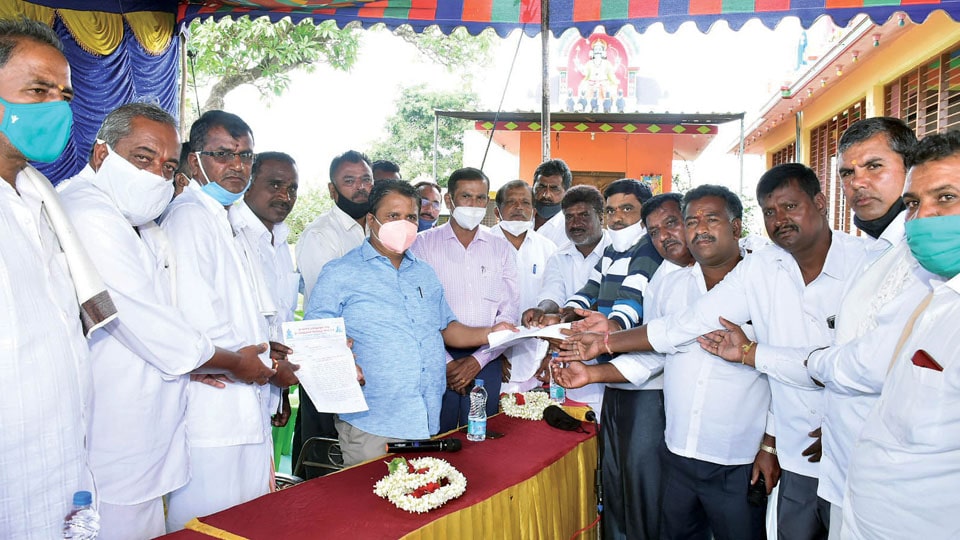 This was announced by  MUDA Chairman H.V. Rajeev while attending a meeting of farmers and land owners this morning at Murada Basaveshwaraswamy Temple at D. Salundi where people had come from villages including Doddahundi and Kere Hundi. Rajeev informed the farmers that a Satellite Town will boost development on the H.D. Kote Road.

“The Satellite Town will be developed by MUDA and the land will be acquired on 50:50 ratio where MUDA and farmers will share the benefits equally. Land losers will get sites in the Satellite Town. I am happy that there is no opposition from farmers of Doddahundi village, Kere Hundi, Dhanagalli and D. Salundi to part with their land. Those who give land voluntarily will get 50 per cent of sites. The rest will be sold by MUDA,” Rajeev told the farmers.

Speaking to Star of Mysore, he said that MUDA is ready to form Satellite Town if a big chunk of land (around 500 acres) is available in 10 km to 12 km vicinity of the city. Around 7,500 sites of various dimensions could be formed. “Even joint venture projects-involving farmers and MUDA can be taken up if 10 acres of land is available within the city limits and on big land (above 25 acres) after Ring Road. MUDA is ready to develop new satellite towns and layouts provided farmers partner with the urban body,” he said.

Rajeev said that MUDA doors are always open to farmers and it should become ‘Farmers’ MUDA’. Farmers have a wrong notion that the MUDA is not  for them. “I want you to come to us. Let us sit, discuss and take up joint venture projects. You will get 50 percent of formed sites,” he said.

Responding to felicitation by people of four villages, Rajeev said this was his first visit to any village after taking over as MUDA Chairman. All facilities will be provided to those villages on priority. While all villages on Mysuru-Bengaluru, Mysuru-Madikeri and Mysuru-KRS Road are developed, no village on Mysuru-Manandavadi Road has seen any development. There is a need to take up development of this side of the city by forming new Satellite Town and layouts, he added.