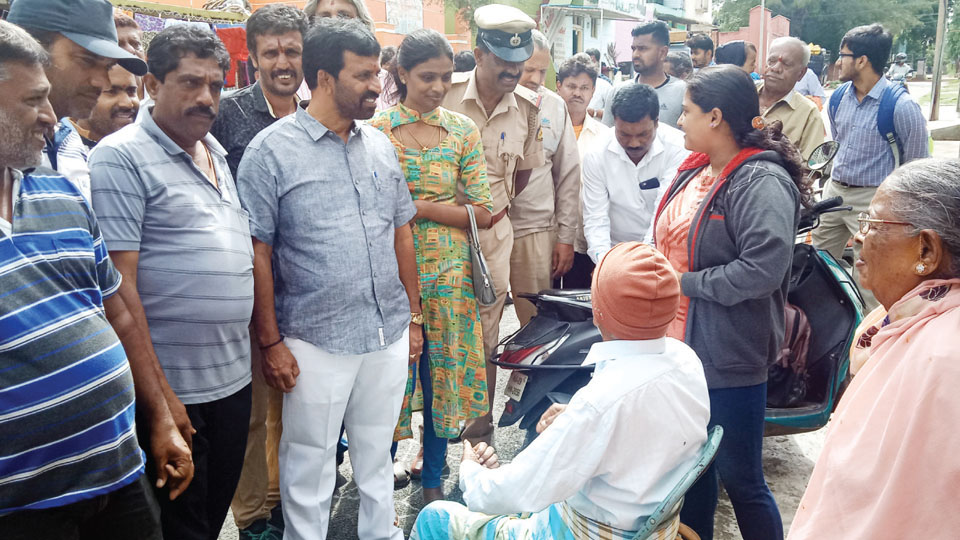 Mysuru: The Chamundi Vihar Stadium Road from Dairy Circle to SP Office is being developed at a cost of Rs.18 crore and the work will commence shortly as the funds have been sanctioned, said MLA L. Nagendra.

He was conducting a padayatra in Ward No.64 and hearing to the people’s grievances. The problems apparently abound in the area as the residents shared their woes. These included the R.O. Plant (Reverse Osmosis) for water though installed not useful to the public, the work on the Samudaya Bhavan not being completed since eight years, MysoreOne not functioning properly, garbage all around and a playground lying idle as it is unusable.

Added to this, weeds have grown which has become home to insects and snakes. Since there are no drainages, the sewage water flows on the road and as a result the mosquito menace has increased, were the many complaints that Nagendra heard.

Speaking on the occasion, Nagendra said, “In this area under ‘House for all’ scheme 226 houses have been built.  The beneficiaries will be entitled to a total of Rs.4.80 lakh out of which Rs.1.50 lakh comes from the Centre, Rs.1.20 lakh from the State and Rs.1.80 lakh from MCC. Added to this Rs.20 lakh has been sanctioned for  re-tarring the Shalivahana and other surrounding roads,” he said.

Rs. 15 lakh has been sanctioned for the development of a park in the Ward and the work will commence immediately. A walking path will also be created and tubelights will be replaced with LED lights at a cost of Rs. 5 lakh, he said.

Nagendra directed the MCC officials to keep all the drainages clean, impose fine on those who dump waste on the roads, issue notice to owners who dump building debris in the parks and to build two e-toilets in the MCC Park, fog the area and spray DDT to curb mosquito menace.

Even as he continued on his padayatra, he could see flowing sewage water, a sinking manhole and underground drainage problems.