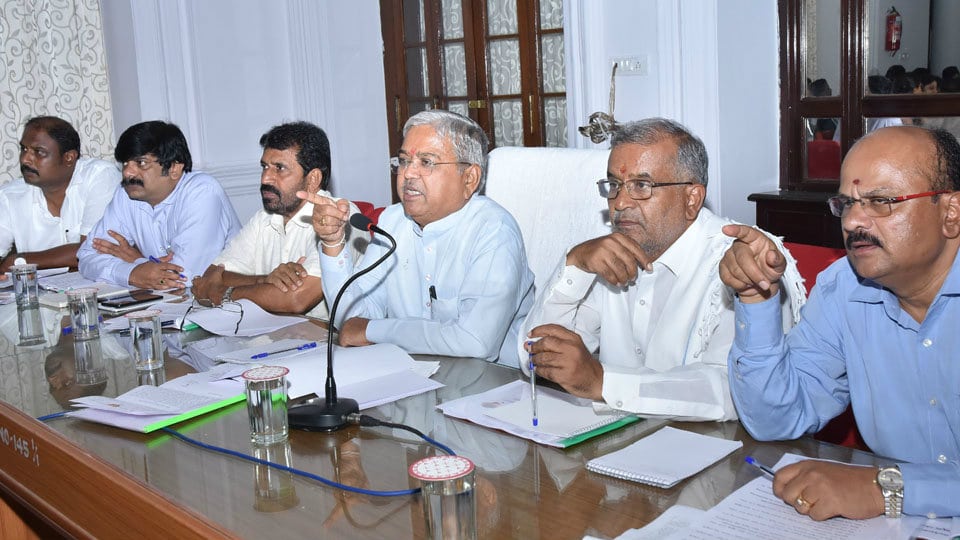 Mysuru, Sept.4 (SBD&DM)- Deputy Chief Minister Govind Karjol has said that Rs.27 crore has been released for taking up emergency flood relief works in the district.

Chairing a meeting of PWD and Social Welfare Department officials at the Government Guest House here yesterday, Karjol said that Rs.82 crore is required for the repair of roads and bridges damaged by rains and floods in the district and Rs.27 crore has been released.

Pointing out that all details regarding the devastation caused by floods has been gathered, Karjol said that the Government would release more funds in the coming days.

Noting that two National Highways passing through the districts have been damaged, he said that the Nanjangud Highway is the worst hit.

The Deputy CM said that Rs.8,000 crore is required for repair of damaged roads, bridges and public buildings in the State and Rs.500 crore has been released for carrying out emergency repair works.

Continuing, the Dy.CM said that Rs.42 crore was required for repair of 24 bridges coming under Hunsur PWD Circle and Rs.9.5 crore for Periyapatna taluk.

When Chamaraja MLA L. Nagendra drew the attention of the Dy.CM on uncompleted projects, Govind Karjol said that the Government would consider the demand for releasing Rs.15 crore to execute works.

Referring to school education, the Deputy CM said that the Government was focusing on skill development of school children.

He directed the officials to ensure that children living in hostels are given quality skill training, quality health care and good food.

Emphasising on the need for setting up more hostels as more number of rural students are studying in the city, he directed the officials to communicate with MUDA on allotment of sites for building hostels.

Seeking an update on the status of various Bhavans in the district, Karjol instructed the officials to provide a detailed statistics on this at the next meeting, following which he will take up the issue with the Government and press for the release of funds.

Taking note of the lack of land for burial grounds both in the city and district, Karjol directed the District Administration to immediately purchase ‘Kharab’ lands for the purpose.

He also issued instructions to all Departments associated with the DC office, to shift to the new DC office complex built near the Milk Dairy.