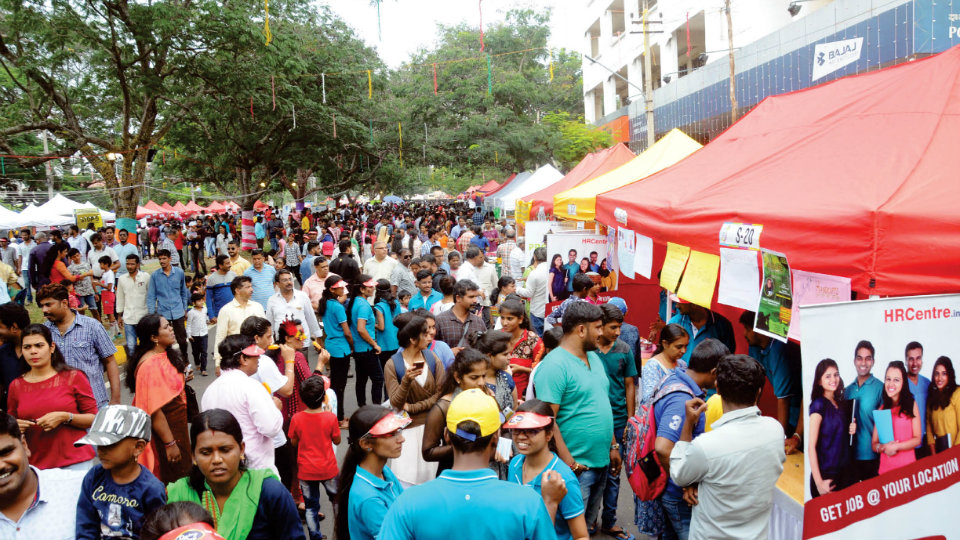 Mysore, Sept.4 (MTY&NNN)- All the three Open Street Festivals — two in 2017 and one in 2018 — have been a stupendous success. But at the same time, the latter two festivals were marred by incidents that left a bad taste in the mouth of many, especially the women who alleged that there were molestations, stalking and even sexual harassment. Instead of providing proper security during the festival, the Police and the organisers have decided to do away with this Open Street Festival known for its carnival-like atmosphere altogether during this year’s Dasara.

Now, the District Administration and Tourism Dept. have decided to host Raitha Santhe and Chitra Santhe on Krishnaraja Boulevard near the Law Courts where the last Open Street Festival was held in 2018.

First two editions of the Open Street Festival were held on D. Devaraj Urs Road in 2017 — one on World Tourism Day and the other, during Winter Festival.

There were also murmurs from the shopkeepers on Devaraj Urs Road who had complained bitterly that their business was affected as the Open Street Festival took up their space from morning till evening.

Bowing to the demand of the shopkeepers that it should be shifted, the District Administration chose a very apt place, which was the KR Boulevard to hold the third edition of Open Street Festival on Oct.13, 2018.

This was the main reason for the Tourism Department to shift the venue. However, in spite of the best intentions of both the District Administration and Tourism Department to hold the third edition in the vast stretch, the event was marred by many complaints from women and girls about misbehaviour by men.

The Open Street Festival became very popular because of lots of food, fun and frolic that this kind of festival is known for. There were food courts, fashion shows, DJ music, attractive fashion accessories, and cultural events right from morning till evening. People came in droves and not only the young but even the old were seen letting their hair down and enjoying the free atmosphere.

However, the last edition on KR Boulevard during Dasara, many felt was not a good idea, as it coincided with the Yuva Dasara that was going on at Maharaja’s College Grounds and the Ahara Dasara at Scouts and Guides grounds, both close to the event. Hence, the Police had a tough time controlling crowds at all the events. There was total traffic chaos and even though the organisers of the Open Street Festival called off the event by evening, still it went on late into the night.

Then complaints started pouring in. Seeing all this, the District Administration and the Tourism Department this year has taken a decision not to hold the Open Street Festival and instead hold Raitha Santhe and Chitra Santhe at KR Boulevard during Dasara.

The organisers told SOM that well-known artistes including top painters and students from CAVA (Chamaraja Academy of Visual Arts) and other Art Schools would exhibit their art works. The Raitha Santhe will be organised by the Agriculture Department where awareness will be created about organic and natural farming. However, the District Administration has still not announced the dates for these events, said a source.