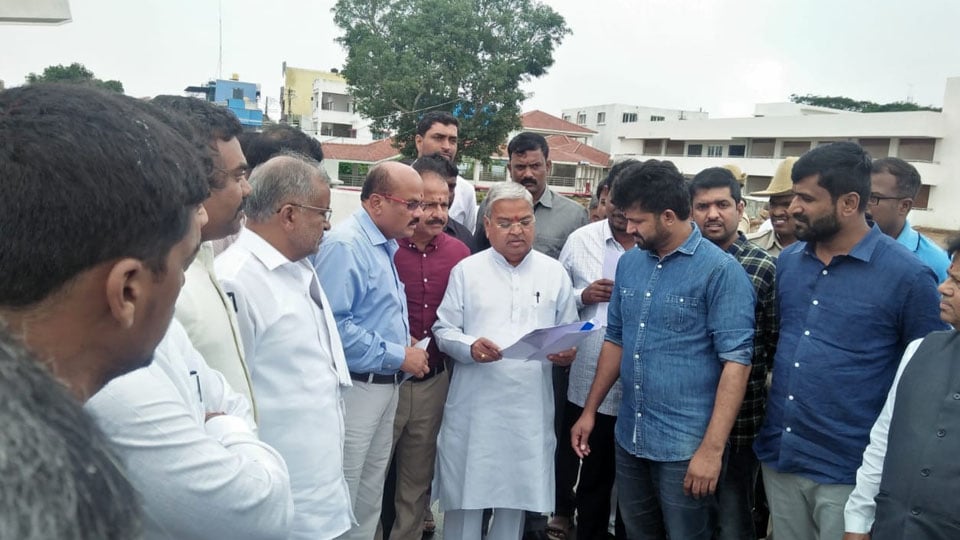 Mysore, Sept.4 (RKB&DM)- Deputy Chief Minister Govind Karjol has said that the multi-level vehicle parking facility atop Chamundi Hill built at a cost of Rs.80 crore will be inaugurated on Sept.19.

Speaking to press persons after inspecting the multi-level parking facility at Chamundi Hill yesterday, Karjol said that the new facility will facilitate parking of 600 cars and 1,000 two-wheelers.

Maintaining that the new parking lot will hugely benefit devotees visiting the Hill Temple, the Dy.CM said that a commercial complex is being built at an estimated cost of Rs.7.04 crore atop the Hill, close to the Temple. He also instructed the officials to prepare an estimate for the massive Dasoha Bhavan at the Hill.

Referring to the damages caused by heavy rains and floods in the district, Karjol said that 2,35,000 homes have been destroyed by floods across the State and measures have been taken for the rehabilitation of flood victims. All the Departments, including the PWD have been engaged in carrying out flood relief works on a war-footing, he added.

Referring to crop loss, he said that cane growers are paid Rs.13,600 and rain-fed crop growers Rs.6,800 per hectare.

Admitting that this compensation was not enough, Karjol said that Prime Minister Narendra Modi will be visiting the State on Sept.7, during which the PM will be appealed for more funds.

Karjol further said that every flood affected family is paid a compensation of Rs.10,000 with the State contributing Rs.6.200 and the Centre Rs.3,800.

Referring to Dasara works, the Dy.CM said that instructions have been given to expedite all Dasara related works well in time and also to maintain quality in the execution of works.