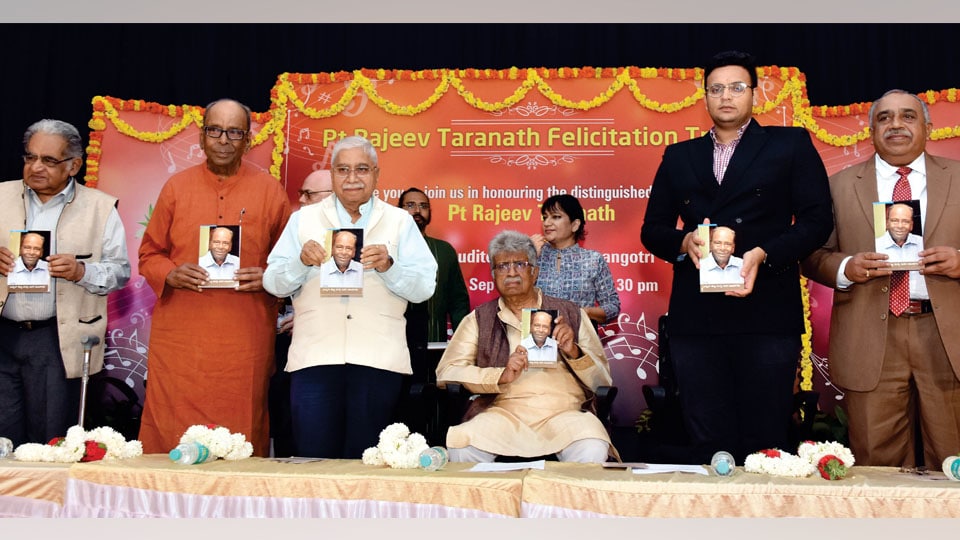 Mysuru, Sept.4 (SBD&NNN)- “Internationally renowned Sarod Maestro Pandit Rajeev Taranath is not only an exponent of Hindustani Music but his contributions to Indian literature is very significant as he sheds light on it and hence considered one of its Gurus,”  said Jnanpith Awardee Dr. Chandrashekhara Kambara.

Taranath, who was instrumental in spreading the knowledge and cultivating a taste of Indian music among the foreigners in the West, is himself carrying forward a big Gharana. Along with his achievements in music, he has contributed immensely to Indian literature, he said.

The first person who spoke boldly that Thomas Babington Macaulay (who introduced English education system in India) was the first person to give the Indians an idea of history was Rajeev Taranath. He spoke clearly about history and gave a new dimension to literature. He also explained how the main purpose of poetry and literature was a Rasanubhava (aesthetic experience), said Dr. Kambara.

There were many things we were writing wrongly as our understanding was limited, but it was Taranath who brought about a change in our thinking and made us write correctly. As a musician, he is a genius who can mesmerise everyone with his scintillating performances but he is also a guide and Guru to all of us in the field of literature, said Dr. Kambara, lauding the many sided personality of the Pandit.

No respect for excellence

Pandit Rajeev Taranath, speaking after accepting the felicitation said that everyone had praised him to the sky and it was difficult to digest so much of it at one time. Like the pungent cumin kashaya, a little bit of criticism is also welcome, he added.

Pointing to the two great violinists from Mysuru sitting in front of the dais, Vid. M. Nagaraj and  Dr.Mysore M. Manjunath, he said they were the two gems that Mysuru has produced and how proud we must all feel. However, Mysureans as a community have become sick. We do not respect excellence (Outamya), he rued.

However, sadly we do not care for artistes. We have become egoistic and cheap in the bargain. We are not proud of anything. When one of the legends of Indian music Bhimsen Joshi was singing, people used to mock at him and ask, “Why, did you not get any other job?” Suffering enough insult, he left Dharwad and went to Pune where he became a God. Similarly, Venkatesh Kumar became very popular when he went to Kolkata where people recognised his immense talent. Just because he went there, he did not acquire special wings. But at least he got his due, said Pandit Taranath.

Real talents are in Karnataka

The real talents we find in Karnataka, we may not find in many other places in the country. We will not find the goodness of the soil in other places. But in spite of all these, the artistes here do not get the same credit as the ones in Kolkata or Chennai. We are satisfied with petty (chillare), insignificant things, he said.

“You have all given me so much of love and respect, but I dedicate all that at the feet of my Guru Ustad Ali Akbar Khan. Next month I am going to turn 87. Even now I can sit and perform for eight hours at a stretch with just a Chai (tea) break. But the listeners are in far away California,” said the anguished Octogenarian.

“In the College started in the name of my Guru there are four students who have achieved a lot. One is the 41-year-old Japanese, and the other three are American artistes who have practised for more than 35 years. Sadly, there is not a single Indian. Here, the youngsters hardly practise for three or four years and their two hands are not enough for their earnings. They need a third hand. There will not be a single book in the house. Just speaking for two minutes, their brain becomes empty and then they pose a question ‘Amele’ (then). They think that everything is purchasable. In many Universities if you pay money you get a doctorate (Ph.D). But I am sure that University of Mysore is not like that as I have also got a Doctorate from this University. However, I did not even have money then. This is the state of the artistes,” he said, exposing the realities of today’s world.