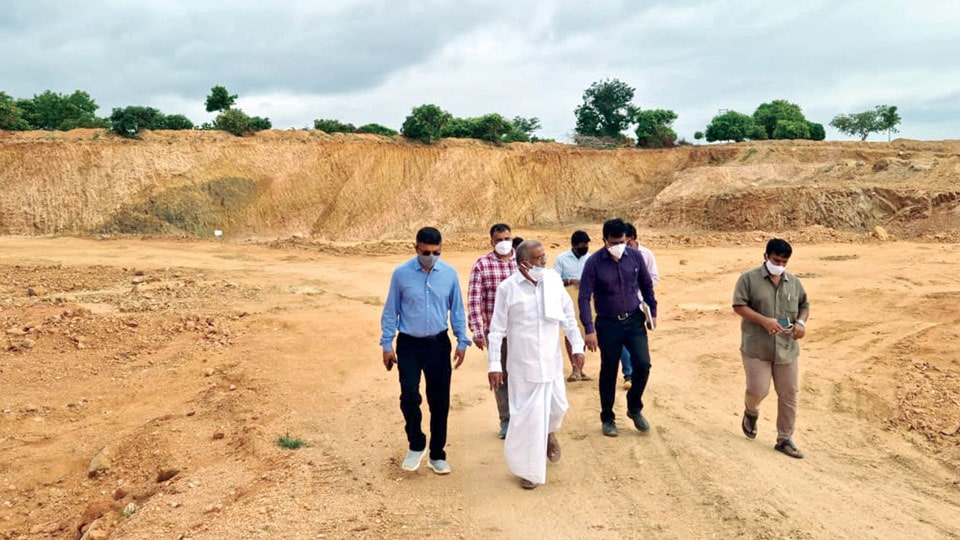 Mysore/Mysuru: The ambitious Rs. 545 crore Hale Unduwadi Drinking Water Project that is aimed at supplying drinking water to Mysuru City and 92 villages around it has begun in right earnest after the tenders for the project were floated in December 2020.

The first phase of the project is being taken up at an estimated cost of Rs. 350 crore. Once the project is implemented, the city and its neighbouring villages will get 300 Million Litres per Day (MLD) water from River Cauvery. This would be in addition to 250 MLD being supplied to the city at present.

This project will get Cauvery water from Krishna Raja Sagar (KRS) Dam backwaters instead of the present practice of lifting water from the canals. The project is designed to take care of Mysuru’s water needs at least for 100 years.

It is one of the biggest drinking water supply project in South India where over 92 villages — a majority of them located in Chamundeshwari Assembly Constituency — will get pure drinking water.

The project was first mooted by Chamundeshwari MLA G.T. Devegowda and former MLA Vasu when Siddharamaiah was the CM. Later, H.D. Kumaraswamy sanctioned Rs. 350 crore when he became the CM. Now the works have been initiated by the B.S. Yediyurappa’s Government after funds were released.

Inspecting the project, which is his brainchild, G.T. Devegowda (GTD) said yesterday that the works have been taken up based on a Government directive though there were plans of a grand foundation laying ceremony by the CM that was spoiled by COVID. “92 villages in Mysuru, Mysuru city, parts of Hunsur, Srirangapatna Taluk in Mandya district are covered in the project and I have struggled for over seven years for the project to see the light of the day,” GTD said, expressing happiness over the project pace.

“When Kumaraswamy was the CM, he allocated Rs. 350 crore for the project and the funds were released by Yediyurappa and tenders were subsequently called. There are many stakeholders to this project and I would like to thank all of them, especially farmers who parted with the land for the project to become a reality,” he added.

The project ensures unhindered supply of water from the KRS Dam even when the water at the reservoir reaches the Dead Storage Level of 74.76 ft. The maximum level is 124.80 ft. Now, if there is a drinking water crisis in Mysuru, Cauvery water is pumped from the backwaters. But the drawback here is that the pumping stations need to wait for water release from the Dam as they are located downstream of the Dam.

Four pumping units that supply water to the city have a total capacity of 265 MLD and are prone to going dry if water level drops below the Dead Storage Level. In the new project, water is drawn directly from the Dam.

MUDA has sanctioned 90 acres of land at Beechanakuppe and it situated at a height and due to the gradient, water will be conveniently drawn through gravity. The plan is to pump water from the backwaters to Hale Unduwadi — located 2 kilometres from KRS Dam — and supply it to Beechanakuppe, where a water treatment plant will be built.

Under the project, raw water will be drawn from the KRS backwaters at Hale Unduwadi through a jackwell and from the jackwell, water will reach Beechanakuppe treatment plant that has a capacity of 150 MLD.

After treatment, water will be pumped to Master Balancing Reservoir (MBR) at Vijayanagar Second Stage and the High Level Reservoir (HLR) at Yadavagiri from where it is supplied to different parts of the city. Pipelines that will extend up to 26.50 km will be laid to supply water to Koorgalli KIADB water storage unit, Vijayanagar Fourth Stage water storage unit and Bogadi tank.