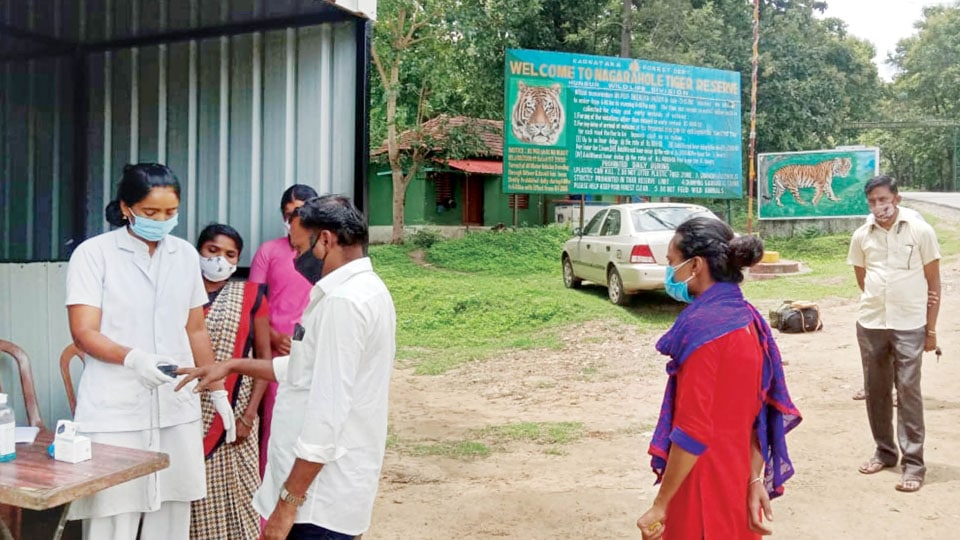 Mysore/Mysuru: Union Health Secretary, Rajesh Bhushan has written to State Chief Secretary P. Ravikumar specifically mentioning about the presence of Delta Plus variant of COVID-19 virus in Mysuru and has asked the top bureaucrat to take immediate containment measures.

This apart, following the State Government directive, stringent checking has been initiated at entry points from Kerala and Tamil Nadu. Chief Minister B.S. Yediyurappa yesterday instructed officials to maintain vigil over the Delta Plus variant, especially in border Districts and States like Kerala and Maharashtra.

The Delta Plus (K417N mutation — also being called B.1.617.2.1 or AY.1) is a mutated form of Delta variant that triggered a sharp surge in COVID cases during the second wave in India. Delta Plus is seen as a possible threat as it could drive the third wave of COVID.

Rajesh Bhushan has written to the Chief Secretaries of seven States and has highlighted the districts where the Delta Plus variant has been detected. The States are Tamil Nadu (Madurai, Kanchipuram and Chennai), Karnataka (Mysuru), Andhra Pradesh (Tirupati), Gujarat (Surat), Haryana (Faridabad), Punjab (Patiala and Ludhiana) and Jammu and Kashmir (Katra).

“You are aware that INSACOG is a consortium of laboratories set up by the Centre for genomic and epidemiological surveillance of COVID in the country. INSACOG is tasked with not just the whole genome sequencing but also giving timely inputs on appropriate public health responses in specific geographies where variants have been found,” the letter said.

The Health Ministry informed the Chief Secretaries that based on data received from the INSACOG so far, it found that the Delta Plus variants have three main characteristics — increased transmissibility, stronger binding to receptors of lung cells, potential reduction in monoclonal antibody response.

Bhushan in his letter said that widespread testing, prompt tracing as well as vaccine coverage on a priority basis is necessary. He highlighted the immediate need of implementing containment measures in these districts and clusters. He has told the States to ensure that adequate samples of positive persons are sent to the designated laboratories promptly so that the clinical epidemiological correlations can be established.

Meanwhile, Mysuru DHO Dr. K.H. Prasad has said that the detection of Karnataka’s first Delta Plus variant In Mysuru was not alarming at present as the sample was collected in the first week of May.

“We have already clarified that the patient is fine and none of his contacts has contracted the same variant,” he said.

Following directives from the CM, the Mysuru District Administration has intensified checking at all entry points to the district from Kerala — from Bavali Check-Post. All persons are screened and their negative RT-PCR certificates are scanned and addresses noted down along with copies of identity cards.

Those who do not have the negative RT-PCR certificates are sent back. Staff manning the Bavali Check-Post said that as of now there is only movement of goods vehicles. “Other passenger vehicles are allowed only in case of emergencies after screening and RT-PCR tests. Once the passenger traffic resumes, the tests will be intensified,” they said.