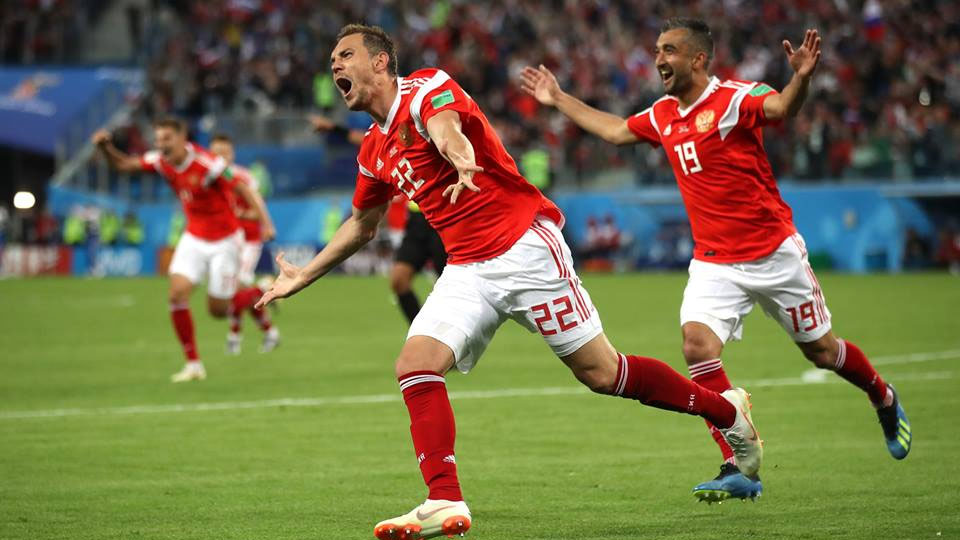 Russia spoil Salah’s party to close in on Last 16

An own goal by Egypt captain Ahmed Fathy opened the floodgates on a sodden night in Saint Petersburg before goals from Denis Cheryshev and Artem Dzyuba furthered Russian hopes they can defy pre-tournament expectations with a deep run into the latter stages.

Salah did net Egypt’s first goal at a World Cup since 1990 from the penalty spot after he had been hauled down 17 minutes from time, but it was too little, too late for the Pharaohs.

Russia will be guaranteed a place in the last 16 and Egypt eliminated unless Saudi Arabia beat Uruguay on Wednesday.

Senegal became the first African team to win a match at the 2018 World Cup on Tuesday when they beat Poland 2-1, helped by two shocking errors in the European side’s defence.

Poland defender Thiago Cionek stuck out a leg and deflected Idrissa Gueye’s wayward shot into the net in the 37th minute before goalkeeper Wojciech Szczesny rushed unnecessarily out of his area and allowed M’Baye Niang to nip in and score into an empty net on the hour.

The win took Senegal top of Group H with three points, along with Japan who also beat Colombia by the same score. Colombia and Poland are both without a point.

Egypt, Morocco, Nigeria and Tunisia all lost their opening games.

Japan beat 10-man Colombia 2-1 in Group H on Tuesday to become the first Asian side to beat a South American one at the World Cup.

Asian teams had managed three draws in 17 matches against South American sides but the four-times Asian champions made their extra man count after Colombia midfielder Carlos Sanchez became the first player to get a red card in Russia.

His sending-off in the third minute, for a deliberate handball, was the second fastest in World Cup history after Uruguay’s Jose Batista was dismissed after 55 seconds against Scotland in 1986.

Shinji Kagawa scored from the resulting penalty to give  Japan the lead.