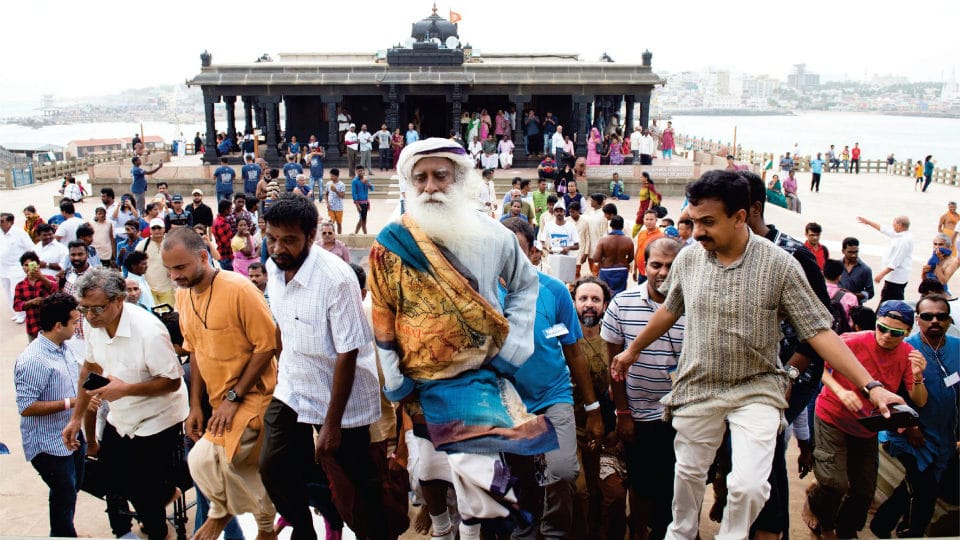 Mysuru: Sadhguru Jaggi Vasudev, Founder of Coimbatore-based Isha Foundation and spiritual leader, has given a call for saving our rivers with the campaign ‘Rally for Rivers’ where he himself will be driving across from Kanyakumari to the Himalayas. The rally was kicked off on Sept. 3 in Coimbatore and will conclude on Oct. 2 after covering 16 States and 7,000 kilometres.

The initiative was flagged off in the presence of eminent people like Union Environment, Forest and Climate Change Minister Harsh Vardhan Singh, cricketers Virender Sehwag, Mithali Raj and car racer Narain Karthikeyan. The initiative comes at a time when rivers of the country are going dry and many cities are facing water shortage problems. The rally has led to a splash of blue on everyone’s social media timeline.

The campaign, that aims to bring a policy change at the national level to save the rivers, will reach Mysuru on Sept. 8 after covering Coimbatore, Madurai, Kanyakumari, Thiruvananthapuram, Tiruchirapalli and Puducherry. From Mysuru, the rally will move to Bengaluru on Sept. 9.

As part of the rally and in a unique effort to increase engagement and interaction between the farmers of Karnataka and Tamil Nadu, farmers of both the States will come together on Sept. 8 at 8.30 am at Meenakshipura near Krishnaraja Sagar (KRS) Dam in the backwaters of River Cauvery. Sadhguru will offer puja to Goddess Cauvery and interact with farmers.

Rally for Rivers will reach Bengaluru on Sept. 9 where a large-scale public event will happen at Palace Grounds. Chief Minister Siddharamaiah will be the chief guest. Ministers M.B Patil, Ananth Kumar, D.V. Sadananda Gowda and Kannada film star Puneeth Rajkumar will also participate in the event.

The rally will reach New Delhi on Oct. 2, covering 16 States and 23 events in major cities, traversing a stretch of 7,000 kilometres. Sadhguru will drive with leading public figures who are actively participating in various legs of the rally. Fifteen Chief Ministers have confirmed their support to the movement and this is perhaps for the first time that over 300 celebrities and public figures from various sections of society are coming together for a cause.

Celebrities from all walks of life – leaders of various political parties, religious leaders, Bollywood, Kannada, Telugu and Tamil film actors, cricketers and corporate heads, all have pledged their support to Rally for Rivers on Twitter.

“This is not a protest nor is this an agitation. This is the campaign to raise awareness that our rivers are depleting. Everyone who consumes water must Rally for Rivers,” said Sadhguru.

“As citizens of India, we need to express our responsibility and change the existing situation of our rivers. How our parents have left the rivers for us, at least that much we should restore before we leave. For the well-being of the nation, for future generations and for our generation, let’s stand up and make this happen.” he added.

‘RALLY FOR RIVERS’ IN MYSURU