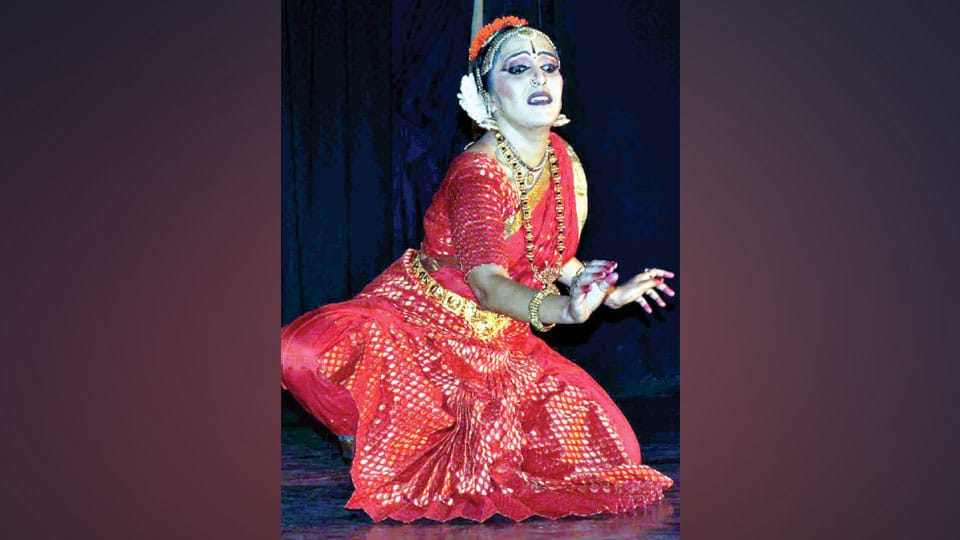 The city of Mysuru, which is enormously bringing into limelight the richness of its culture, has become a centre for promotion of cultural talents with the provision of various platforms. One such platform for Bharatanatyam was organised by Nadabrahma Sangeetha Sabha commemorating the birthday of T.V. Alamelu on Feb. 25. It was a solo classical recital titled ‘Nartana Samarpana — A journey of Bhakti through Bharatanatyam’ by a city-based renowned danseuse Vidu. Mithra Naveen. The programme which was staged recently at Sri Vasudevacharya Bhavan in city left the audience soulfully satiated.

The recital began with Vid. M.S. Naveen’s sanctum invocation ‘Gajananayutam’ sung in praise of Lord Ganesha. With the completion of Melaprapthi, started the first nritya bandha Puspanjali in raga Ranjani set to Adi taala which marked the entry of the dancer with flowers being offered to Lord Srimannarayana. The rigorous entry flowered with a perfect blend of adavus and Sholkattus – set to tune, while it incorporated the shloka ‘Shantakaram Bhujaga Shayanam’ which conveyed the deed of Lord Vishnu who dwells in the hearts of his devotees.

The artiste set out eventually with her dancing skills step after step. Immediately, after which she continued with the most deciding item of a Bharatanatya Margam being the Pada Varnam. It was one of a kind for it undoubtedly reached the ideology of Aatma meeting the Paramatma through dance.

The Varna showcased the desperation, struggle and hardships that the Nayaki faces in the course of sacrificing the self to her deity or the Nayaka which in this case is Lord Krishna. The famous Kannada composition ‘Neela Megha Shyama Sundarana Karetare Sakhi’ by G. Gurumurthy in Ragamalika set to Adi taala marked the intelligent coordination of the Guru and Shishye on stage.

Mithra impressed the audience with her sheer longing for the Nayaka, who describes him and requests sakhi to bring him to her in the Sanchari Bhava. While her disciple Aparna on the natuvanga managed to produce the desired effects accordingly without deviating from the bhavas presented. As said in ‘Bhaktisuthra’ by Lord Naradamuni about the ‘Ekadasha Vidhas’ which he calls as ‘Aasakthis,’ three of those being the ‘Roopasakthi’ caused by the personality of the God, ‘Kanthasakthi’ as a result of the desire to make the Lord her spouse and ‘Virahasakthi’ ultimately due to the separation from the Lord were all depicted throughout until the end of the second half of Varna. The later half was perfectly woven with elegance and Abhinaya of the dancer.

The next item immediately in store without any gap was the Kruthi – ‘Devadi Deva Sri Vasudeva,’ composed by Vasudevacharya, sung in Sunada Vinodi raga set to Adi taala. The Nruthyabandha portrayed the spiritual surrenderance of the Atma by renouncing the ‘Arishadvargas’ — Kama, Krodha, Moha, Lobha, Mada, Mathsyarya and at the end reaching the Paramatma. In the Sanchari, Mithra briefly depicted the nuances of the arishadvargas and accordingly, throughout the sahitya performed, the devotee’s utter attempts requesting the Lord to release him from all these sins and accept him. The Bhakti was skilfully expressed and was reflected on to the Rasikas as well.

The last presentation was the Devaranama (Ugabhoga) – ‘Neene doddavano, ninna Dasare doddavaro?’ in Revati raga and Adi taala composed by Purandaradasa. It firstly included the story of Srinivasanayaka transforming into Purandaradasa walking the Bhaktimarga after realising the omnipotence of God. And another story of ‘Narasimhavatara’ where the strident king Hiranyakashipu was overpowered by the omnipresent Lord Vishnu in his fourth incarnation as ‘Narasimha.’ The discourse between the father and the son Prahallada, the entire consequences of Prahallada’s firm belief and Bhakti in the Lord leading to the breaking of the pillar and finally the good triumphing over the evil was all narrated in the second sanchari.

Also the Shloka – ‘Hey Gopalaka, Hey Krupajalanidhe’ was added to the devarama’s sanchari which glorified Lord Krishna’s the different powers and amusements. Leelashuka kavi’s rendition to Lord Madhava on the whole had references to the Gunamahatwasakthi and Poojasakthi in it. The Sanchari was succinct, well-conveyable and not bombastic. Emotions were well balanced and the transitions of bhavas were wittily depicted.

If the Alapanas of the singer complimented the arousal of varied emotions, legato of the flautist in the sanchari went on parallelly with the stories narrated, while the mridangist’s absolute feat coped with Mithra’s compositions, together resulting in the outcome of complete Abhinaya. Thus the pivotal theme of the evening was accomplished, where the categorical attempts for the Union of Aatma with the Paramatma through Bhakti in Dance was well presented. At last a Mangalam ‘Pavamana’ wound up the programme.

Vidu. Mithra Naveen was accompanied by her disciple Aparna Kodankeri on natuvanga, Vid. M.S. Naveen on vocal, Vid. Tumkur B. Shashishankar on mridanga and Vid. C.N. Tyagarajan on flute. Vidu. Disha G. Marigoli aided the audience with a quick briefing of the themes in the dance items performed.