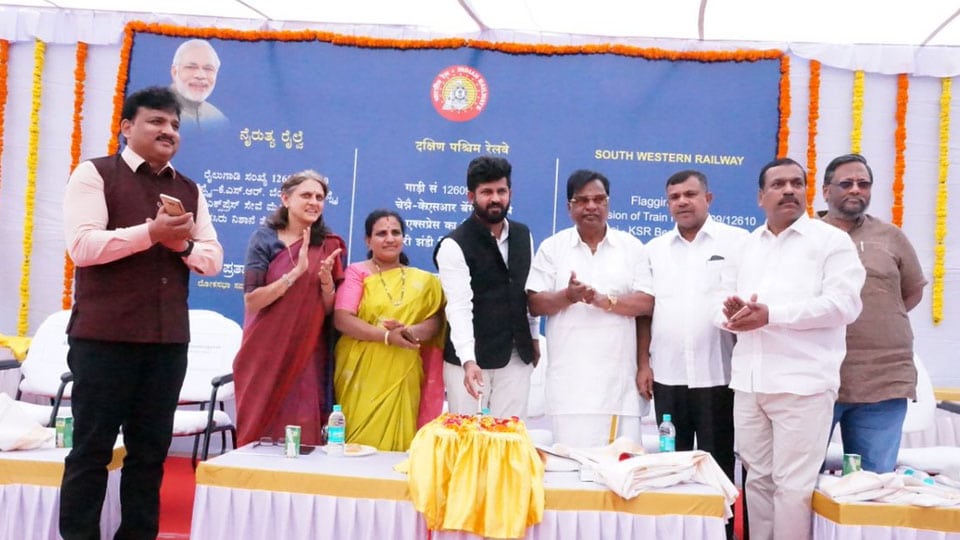 Mysuru: At a time of political turmoil when our Karnataka BJP MLAs are holed up at a plush resort in Gurugram near New Delhi and at a time when a couple of Congress MLAs are said to be ‘out of touch’ with their party bosses, the remarks made by JD(S) MLC Sandesh Nagaraj lauding Mysuru-Kodagu MP Pratap Simha has raised brows.

Yesterday when the MP flagged off the inaugural run of Mysuru-Chennai Express from City Railway Station, Sandesh Nagaraj, in his speech, said that Mysuru has seen many development projects since the last five years after Pratap Simha became the MP.  “Pratap Simha has done good work and he is known to have lobbied hard for many infrastructure projects to the region and he has been successful in bringing a couple of projects to Mysuru. Today we have many trains, new flights are starting and there is much stress on Swachh Bharat. All this due to the efforts of Pratap Simha,” he said.

It may be mentioned here that on Dec. 24, during the inauguration of Mainline Electric Multiple Unit (MEMU) train service at City Railway Station, Sandesh Nagaraj said that Pratap Simha had taken up many developmental works in his four-and-a-half-year tenure as MP, which would ensure Simha’s re-election in the 2019 LS polls.