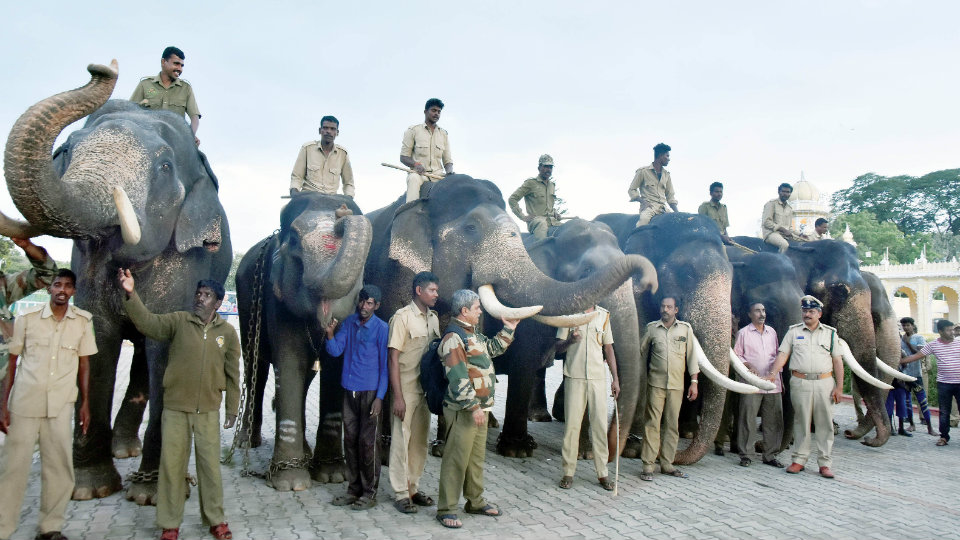 The seven elephants — Balarama, Kaveri, Vikrama, Gopi, Durgaparameshwari, Jayaprakash and Lakshmi — were traditionally welcomed into the city Palace after performing puja to them.

However, Balarama had arrived in city on Sunday and was brought  to the Palace along with the second batch of elephants.

The first batch of six elephants is camping since their arrival here on Aug.22. With the arrival of second batch of six jumbos along ‘Balarama’ the entire squad of 13 Dasara jumbos will undergo training for Jumboo Savari.

The 61-year-old elephant Balarama, which used to arrive in the first batch till last year, had successfully carried the Golden Howdah for 14 times in a row.

Balarama, who is sheltered at Mattigodu camp, has been participating in Dasara festivities for the past 23 years and is one of the oldest Jumbos in the squad.

The 46-year-old Vikram from Dubare camp has been donning the role of ‘Pattada Aane,’ participating in the Palace rituals, since the last four years.

Gopi, 37 years, also from Dubare camp, has been taking part in Dasara since the past nine years.

Jayaprakash, 57 years, belongs to Ramapura camp and is making its debut this year.

The 17-year-old female elephant Lakshmi is the youngest in the batch and belongs to Ramapura camp.

Kaveri, 41 years, is from Dubare camp and 52-year-old Durgaparameshwari is from K. Gudi camp.

However, elephant Rohit, who was in the original list of Dasara Jumbos, was dropped due to his mischievous attitude, it is learnt.

However, Forest officials, who denied this, said that 12 elephants are required for Dasara procession and an additional elephant has been added. As all the elephants are found healthy, the elephant Rohit was not brought to the city, they said.