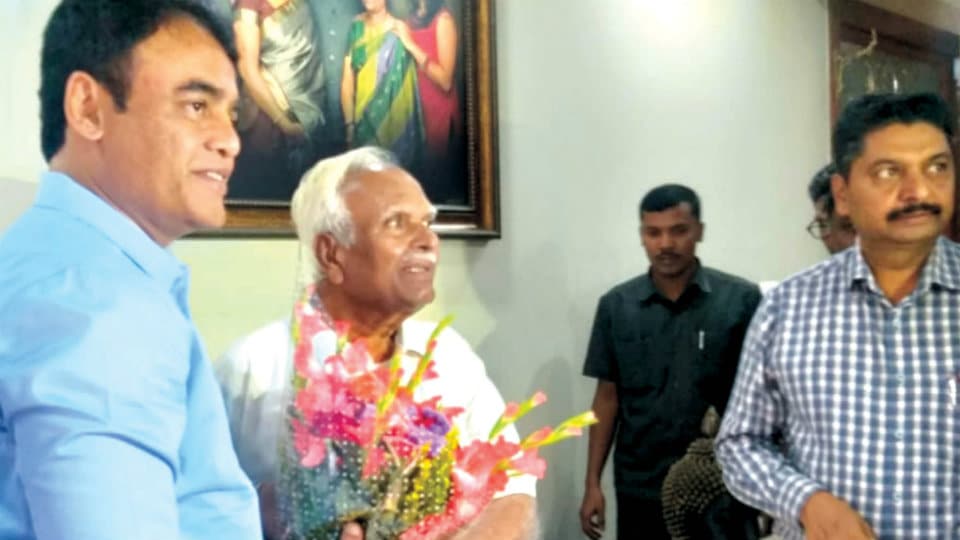 Mysuru: Former Chief Minister Siddharamaiah is a lone warrior in Congress party and his party will not win even a single seat in the upcoming by-elections to 15 seats, said Deputy Chief Minister Dr. C. N. Ashwath Narayan, here this morning.

The Deputy CM spoke to mediapersons after meeting Congress leader and former Speaker Krishna at the latter’s  Kuvempunagar residence.

Stating none of Congress leaders, except Siddharamaiah, were actively taking part in the campaign, Ashwath Narayan said the other Congress senior leaders did not want to accept the former CM as their leader and added that by-polls will end in favour of BJP with the party emerging victorious in all 15 seats.

Reacting to former Chief Minister Kumarawamy’s statement that JD(S) and Congress would come back to power after the by-polls, the DCM said that both JD(S) and Congress, which lacked co-ordination, had declared war against each other and the possibility of them coming together again was far from reality.

Mandya to get representation in State Cabinet

Ashwath Narayan, urging K.R. Pet voters to support BJP candidate K.C. Narayanagowda, said that Chief Minister B.S. Yediyurappa has promised a representation to Mandya in his Cabinet that would help in overall development of the district and added that district will be extended with all benefits that were denied by Congress and JD(S).

“Chief Minister B.S. Yediyurappa, who is a native of Mandya district, has granted lift irrigation project apart from releasing Rs. 150 crore for various development works in Mandya,” he added.

“Having been born and bought up in Mandya and being a frequent visitor to Mysuru as a child, both districts are emotionally attached to me,” said Ashwath Narayan. Stating that his mother was a native of Arkere in Srirangapatna taluk, the DCM said that casting votes in favour of JD(S) and Congress was of no use as they will not be able to form the government together.

Earlier, Ashwath Narayan on his arrival at Krishna’s residence was given a warm welcome. The former sought the blessings of Krishna, who had earlier represented K.R. Pet constituency in the Assembly. Speaking to Ashwath Narayan, Krishna said that  he preferred to stay away from active politics since he had lost interest.

Stating that there was a need for political parties to change their approach for betterment of the country, Krishna said today’s youth, especially those below 40 years, had to think about the need to change and taking the country forward. Later, Ashwath Narayan and Krishna held closed-door talks. Sources said that the DCM sought the former Speaker’s support for BJP candidate in K.R. Pet.