Home » News » Set up Study Chair in the name of K.H. Ramaiah 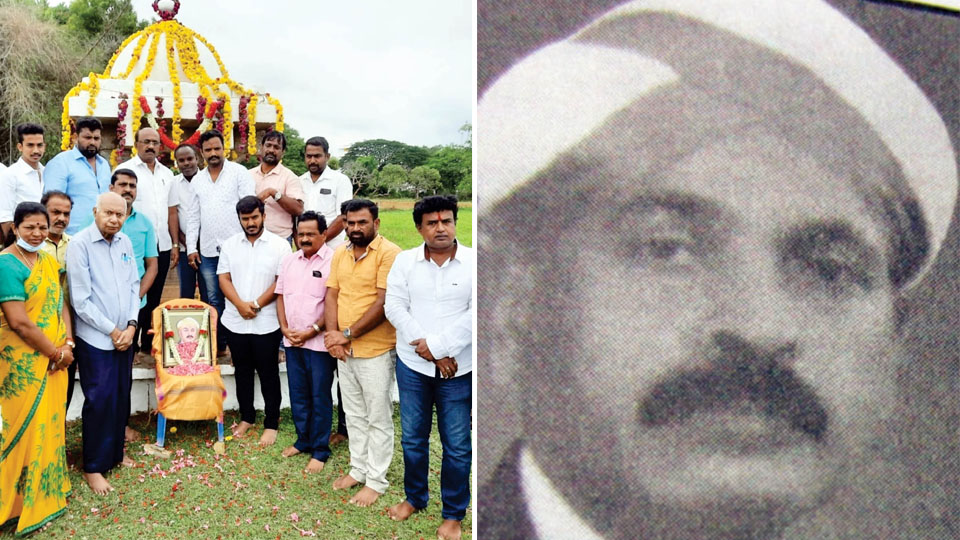 Set up Study Chair in the name of K.H. Ramaiah

Mysore/Mysuru: Noted Kannada scholar, Dr. C.P. Krishnakumar (CPK) has urged the University of Mysore (UoM) to set up a Study Chair in the name of K.H. Ramaiah who dedicated his entire life for the social and academic progress of Backward Classes in the State.

He was speaking at the 142nd birth anniversary of K.H. Ramaiah at his samadhi at the foot of Chamundi Hill organised by ‘Nammuru Nammoru Samaja Seva Trust’ here on Monday.

The scholar said that the achievements of several achievers were neglected at the time of recording history. One among them has been Ramaiah whose achievements had been totally neglected. Ramaiah originally belonged to Kalludevarahalli in Doddaballapur taluk, but resided at Balepete in Bengaluru. His parents were Hanuma Mestri and Nanjamma. He was born on July 12, 1879 in the family of agriculturists. Though he belonged to Vokkaliga community, he worked for the welfare of the Backward Classes too. After obtaining degree in Law in India, he pursued higher studies in Law in England.

Even as student, Ramaiah always thought about Backward Classes, their education and welfare. During those days, he led an agitation against the British rulers for denying top posts for Backward Classes and had caught the attention of the then Mysore King, Nalwadi Krishnaraja Wadiyar. The King then constituted a Committee which recommended reservation for Backward Classes in top posts. Besides, Ramaiah was offered a top post by creating a separate department for the progress of rural areas in the erstwhile Mysore State.

He used to visit villages to study about the communities. Several organisations made him as the guide. A Co-operation Movement began in the State and the entire responsibility of the Co-operation Department was entrusted to him.

Ramaiah had accompanied Narasimharaja Wadiyar during latter’s tour of European countries as Personal Secretary. By the time they returned to Mysuru, the duo had become good friends. When Ramaiah passed away, Narasimharaja Wadiyar had arranged for the last rites of his close friend, said Dr. CPK.

He said Ramaiah did not have any restriction as the Government officer on giving guidance regarding the progress of Backward Classes.

His request to open a school for the Backward Classes with the King was considered and Nalwadi Krishnaraja Wadiyar inaugurated a school built at Malavalli. Ramaiah started Adi Dravida Sangha and encouraged social and academic progress of Dalits. The community was explained to give up intra-caste fight. Free hostels were opened to encourage them to study. Since the current generation was not aware of the contributions of Ramaiah, UoM must establish a Study Chair in his name and also install his statue in front of Town Hall. Besides, an important circle or a road must be named after him, he added.