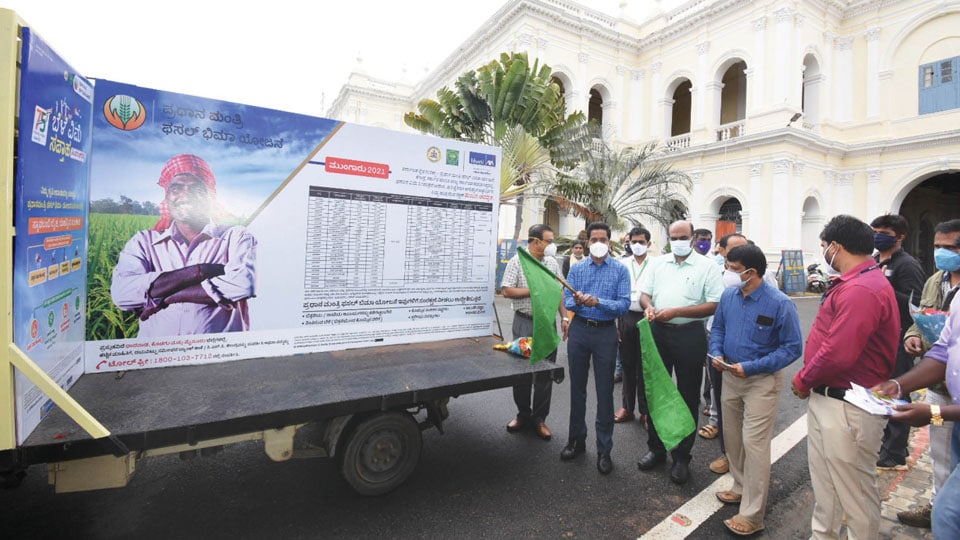 Mysore/Mysuru: Deputy Commissioner Dr. Bagadi Gautham has said advance warning has been issued to people living in the low-lying areas of Kabini Dam in the wake of heavy downpour in neighbouring Kerala.

He was speaking after flagging off a campaign vehicle for ‘Karnataka Raitha Suraksha Pradhan Mantri Fasal Bima Yojana’ aimed at giving information to farmers in connection with the crop insurance scheme for khariff season in the current year, at the DC’s office here yesterday. Farmers must make use of this facility to avoid crop loss, he said.

The DC said, the inflow of water into Kabini Dam has increased due to heavy rain in Wayanad region of Kerala. In view of this, people living in downstream of the Dam have been alerted. The District Administration was in constant touch with Kerala Water Resources Department to exchange information on the release of excess water to Karnataka. Water had already been released into the canals. The release of water into the river will be decided depending upon the situation, he added.

Dr. Gautham said the COVID-19 pandemic has come under control in the district and the Case Positivity Rate has dropped to 2 percent. But the situation has not fully under control. People must continue to follow the safety guidelines strictly.

The District Administration was fully prepared to face the third wave of COVID-19 pandemic. It has been decided to continue the services of ‘COVID Mitra’ till the pandemic comes under control in district, he noted.