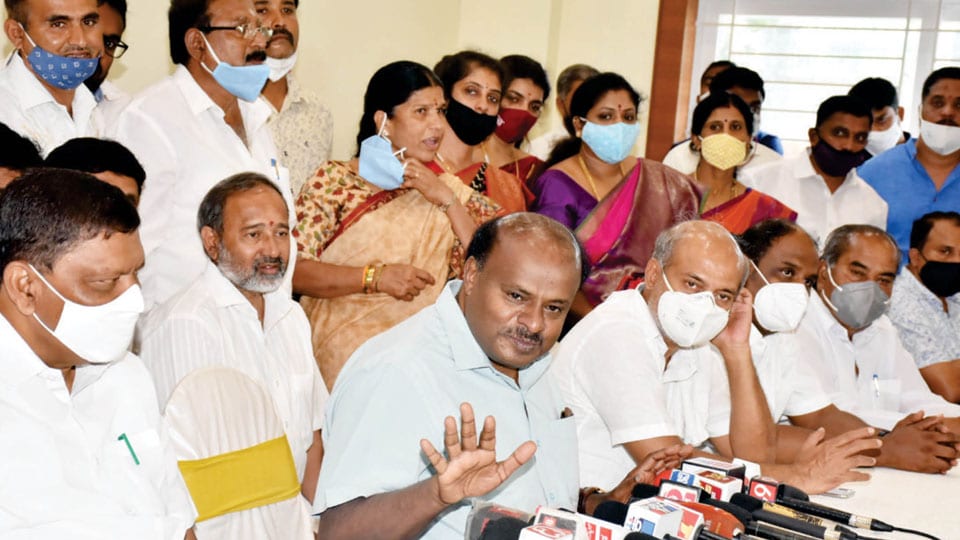 Mysore/Mysuru: Former CM and JD(S) leader, H.D. Kumaraswamy (HDK) accused Opposition Leader Siddharamaiah of having a soft corner towards BJP and said this has been proved on many occasions on the floor of the Assembly.

Talking to reporters at Sa.Ra. Convention Hall before addressing party workers convention ahead of Gram Panchayat (GP) polls here this morning, he said the Congress leader attacks the BJP and its leaders ‘superficially’ but he had affection towards the saffron party. The subjects which Siddharamaiah raise against the State Government in the Assembly, indicated how they were without stuff.

HDK said the biggest mistake committed by former PM and JD(S) Supremo H.D. Deve Gowda had been forming Coalition Government by joining hands with Congress. Efforts of building JD(S) for almost a decade went waste after he headed the Coalition Government with daily torture by Congress leaders.

Siddaramaiah emotionally blackmailed Deve Gowda saying all secular forces must unite to defeat communal party from coming to power. Unfortunately, Deve Gowda believed it and paid heavy price subsequently. The image of JD(S) had been tarnished for forming the government with Congress, he added.

Training the guns on BJP, the JD(S) leader said Ministers have become hyper active since the announcement of dates for GP polls and at least four Ministers were camping in each district to woo voters. People would have appreciated BJP had they showed similar interest when unprecedented floods hit several districts. CM B.S. Yediyurappa was in Belagavi since yesterday to attend the party Executive Committee meeting but he did not have time to visit flood-hit villages. The incumbent government was directionless and all development works had come to a standstill in the last one year. The BJP was offering funds for temples if any village ensure the selection of candidates unopposed. Even the Congress party was not lagging behind and was offering sops to candidates.

Taking a dig at the formation of Development Corporation for every caste, HDK said it was meaningless to have so many Corporations for castes, sub-castes without providing funds. Any Development Corporation required at least Rs. 3 crore to 4 crore to maintain office and no money was left to help the community people. The CM was busy in naming candidates as Chairmen of various Boards and Corporations in the last 10-15 days to check the growing dissidence within BJP. “I am optimistic that Yediyurappa will complete full term despite turbulences within the saffron party.”