Home » Feature Articles » Sidelined at Southampton, Indians have a lot to introspect 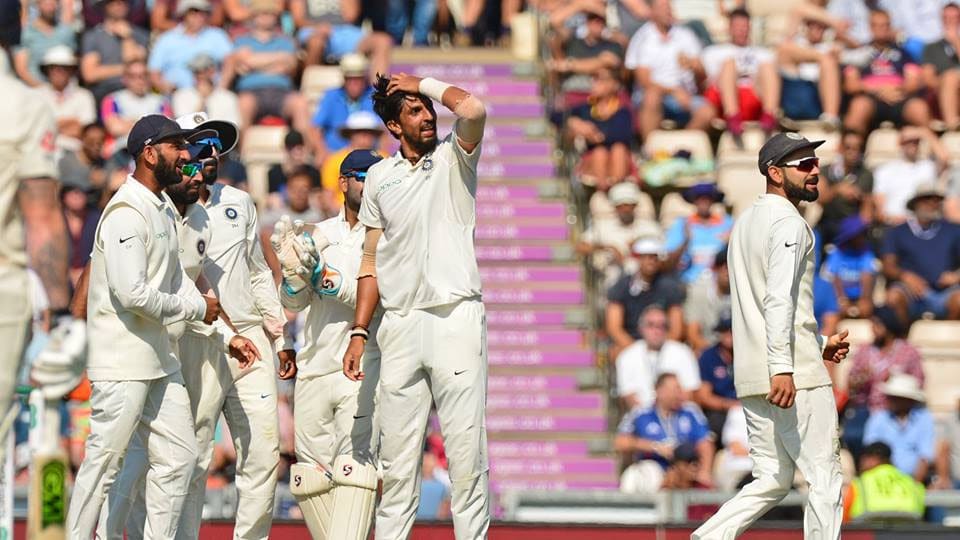 Sidelined at Southampton, Indians have a lot to introspect

Hearty congratulations to the Englishmen on clinching not only the test but also the series at Ageas Bowl. There was no ‘Devil’ in the pitch. The ball did more off-the-pitch than in the air. ‘Puffing’ on the surface appeared from 3rd day; accentuated by Ishanth Sharma who landed repeatedly in the danger area of the deck; inviting umpire’s warning twice.

Opening stands of both the sides lacked the class. With just over a 1000 runs in the test that concluded on the 4th day, neither of the teams had reasons to complain of excessive fatigue under beautiful blue-skies and under bright sun. While both the teams having BOWLS of batting woes, it was young Sam Curran who undoubtedly scripted victory for England with his brilliant 78 and 46. At just 20 years of age, he looks a brilliant long term ‘All — Round’ prospect for England.

One wonders what was on the mind of Ashwin who fell short of fundamentals of ‘Off-Spin’ that a club-player would perceive; that is to exploit the rough created by Ishant. While Ali kept it simple lobbing high the 5.5 ounce ‘Duke’ cherry from over-the-wicket just away from off-stick, Ashwin was hapless nowhere near the rough; more with flatter deliveries than flighted ones. He was predictable all the time. Somehow, an off-spinner bowling round-the-wicket continuously does not augur well to exploit weakness of good batsmen. Ali was just brilliant and deserved the ‘Player of the Match’ award.

Combination of Ravi-Virat ‘think-tank’ in terms of the selection of teams for various venues are not effective. When Ashwin was not cent percent with a groin injury, Jeddu probably was a better option. As seen in long years, Jeddu bowls ‘stump-to-stump’ continuously and would have been more effective on a dry pitch at the Ageas. Pandya confuses the world with his indifferent performance with both bat and ball.

Our batting was all at sea — save good knocks by Pujara, Virat and Rahane. Pant’s ZERO off 29 was unlike him in the 1st innings. His natural stroke play in the 2nd innings should have gone on with a bit of caution and responsibility as the finishing line was not too far away. Dhawan looks ever vulnerable with his dangling blade. With 1000 test scalps between Anderson and Broad, they are well versed to have him in the slip cordon at will. It would do well for the youngsters to concentrate more on watching videos than on cosmetics.

Virat’s disposition at the post-match award ceremony was more of a ritualistic routine than genuine. While our pacers did the job commendably, it was naïve to contend that our team is competent in all the departments. It was more that the Englishmen were not a competent bunch in their own backyard than our being anywhere near good. When a team cannot put up 350 plus on the board consistently, the class is just not there.

Last but none the least, the world bids adieu to Alastair Cook on his grand career spanning 12 years. He hangs up his boots with a record of 12,254 test runs in 160 Tests @ 45. His stylish batting was studded with 32 hundreds and 56 fifties. We thank him for his wonderful performances and wish him all the best.

2 COMMENTS ON THIS POST To “Sidelined at Southampton, Indians have a lot to introspect”