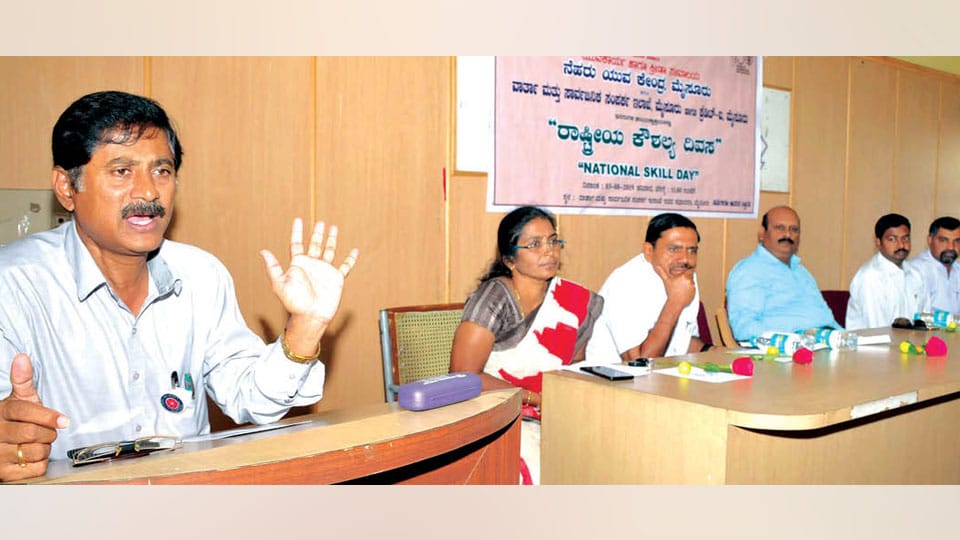 Mysuru: Observing that skill development is an important issue these days in the backdrop of rapid strides in Science and Technology, University of Mysore (UoM) NSS Programme Co-ordinator Prof. B.S. Chandrashekar has said that highly skilful students can lead to the generation of jobs.

He was speaking after inaugurating National Skills Day (Rashtriya Kaushalya Diwas) jointly organised by the Department of Youth Services and Sports, Nehru Yuva Kendra, Department of Information and Public Relations and Credit – I Mysuru, at Vartha Bhavan on Dhanvantri Road here yesterday.

Regretting that though India has the biggest human resources in the world with a large number of educated youth, Prof. Chandrashekar expresses concern over poor quality of skills among the youth.

Stressing on the need for the country to move up on skill development index ladder, Prof. Chandrashekar said that Infosys founder N.R. Narayanamurthy had once said that only 35 percent Indian Engineers were employable, while the rest 65 percent lacked skills. Noting that if such a poor skill development was found among engineers, he wondered what would be the fate of non-technical graduates.

Noting that the Indian Government is celebrating World Skills Day in order to lessen the gap between studying and developing skills, he said that small necessitates of daily life can be met by developing skills.

Emphasising on the need for the students to acquire more than one skillset, he explained how acquiring skillsets will lead to advancement in careers.

Prof. M.S. Manonmani, faculty at Maharani’s First Grade Arts College for Women, in her address, pointed out that nature has provided us with very useful things and making good use of them was most important.

Observing that CCPD skills play a vital role in the lives of every human being, she said that the first ‘C’ in CCPD meant Creativity, second C-Critical and PD- Problem Decision making.

Underlining the need for individual-level communication, Prof. Manonmani said that doing so will help in understanding ourselves and where we stand by in the society.

Department of Information and Public Relations Assistant Director R. Raju in his address, said that skills are vital in every stage of life and skillset is most important in doing even small things.

Credit – I Director Dr. M.P. Varsha said that the undeserving gets most of the opportunities, while the deserving are deprived of the same.

Stressing on the need for setting goals at an young age, Dr. Varsha said that the children should be educated on making their own choice for their career.