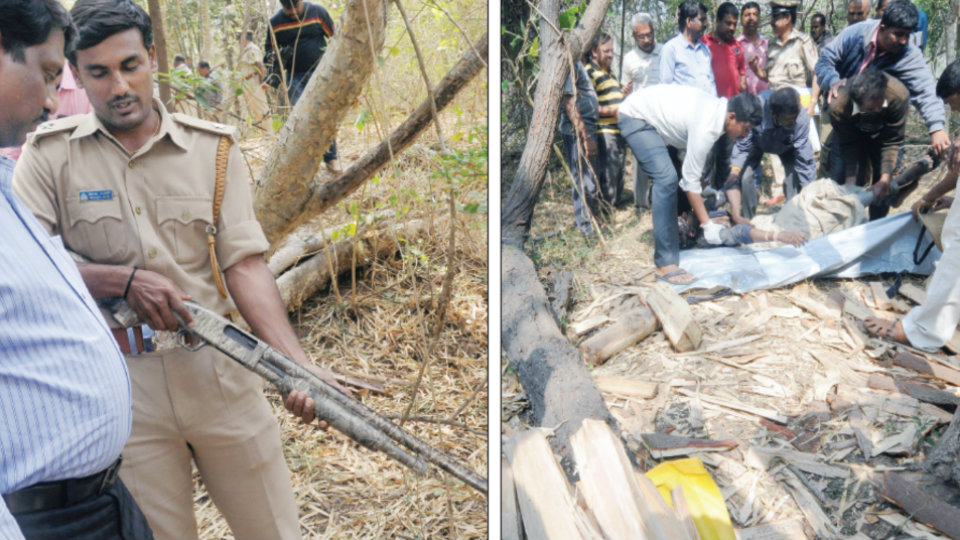 The incident occurred between 3.30 am and 5 am at the mini forests beyond Kuvempunagar, Ramakrishnanagar and Lingambudhipalya near the Lingambudhi Lake.

According to the Forest officials and Police, the gang had cut the fencing of the Lake and entered the forest   with equipment including two battery-powered saws, daggers, tarpaulin bags, ‘longs’ (machete), wood choppers and a couple of chisels.

Meanwhile, following reports that sandalwood is being smuggled from the lake surroundings, watchers Manju, Nanjunda and Chikkanna were patrolling the area since yesterday evening.

Early this morning they heard cutting and chopping sounds and headed in that direction. Soon  they spotted the gang and also  noticed that the smugglers had already cut a tree trunk and were chopping it into small pieces.

As the watchers neared the spot and flashed their torchlight at the gang, two of them ran towards the watchers menacingly flashing daggers. Sensing danger to their lives, one of the watchers opened fire in the dark with his Pump Shotgun trying to scare them away. Hearing the gunfire, the smugglers panicked and they fled with the tarpaulin bags that were filled with sandalwood pieces, however, the defensive shot had killed one of their accomplices.

The watchers gave chase but it was futile but when they came back to the spot where the tree was cut they realised that they had killed one smuggler and immediately alerted their higher officials and the Police.

Officials said that the smuggler might be one Shankar and he had succumbed to a bullet wound on his back. Shankar is the native of H.D. Kote and his phone records and call details are being screened to nail the other smugglers. A name “Ravikrishna” has been tattooed on his arm.  Following the shootout, entry to the lake has been banned until further orders. This morning, walkers were asked not to take a stroll in the area. Over 20 to 30 Policemen are guarding the area.

The modus operandi of the smugglers is that they would spread fear in the area saying that leopards are on the prowl in and around Lingambudhi Lake. Hearing about leopards, residents and walkers rarely ventured out of their houses early in the morning and late in the evening. This helped the smugglers to enter the lake premises and identify the grown sandalwood trees which they could cut.

As the shooting incident came to light this morning, several residents gathered in the area and were appreciating the efforts of the Forest Department in curbing smuggling menace by effecting patrolling.

READ ALSO  Lingambudhi Lake to be developed as tourist spot