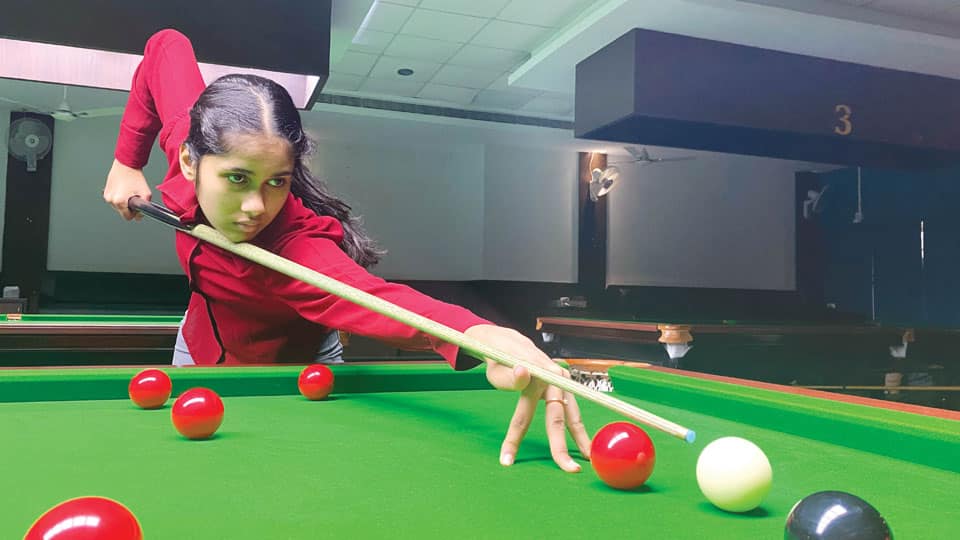 Snooker prodigy to play for India at global event

14-year-old Natasha Chethan, who started the precision game when she was just nine, has a Mysuru connection too

Mysore/Mysuru: Natasha Chethan, who has her roots in Mysuru, has been selected to represent India at the World Snooker Championship to be held from Aug. 21 to 25 in Bucharest, Romania. Aged 14, she is the youngest player of the contingent and will be representing India in the Women’s Under-21 Category.

She had participated in the UK 9 Ball Pool Open held in May 2022 in London and in a Chinese Pool (hey ball) championship in Kuala Lumpur, Malaysia. At Bucharest, she will be representing India for the first time. “It is a proud moment,” she told Star of Mysore.

Natasha is the official junior ambassador of ‘Sight Right’, a premier UK-based academy which has been training snooker champions like Mark Williams and Shaun Murphy for many years now. She is sponsored by Finland-based Taom, a prestigious pool and snooker equipment manufacturing company.

Natasha, who started playing when she was just 9, said, “I used to watch my mother play at her club. I was not allowed to play as I was too young but I took a liking to the game. My dad is a coffee planter in Sakleshpur and I later got a chance to play at the Planters Club in Sakleshpur. In Bengaluru, I played at the Century Club and Bangalore Snooker Academy.”

She is at present being coached by Pranit Ramchandani and will leave for Bucharest on Aug. 19 with three other girls and the rest of the Indian team. “My daily schedule usually includes routines which help enhance the game and build up breaks. I practice for about 4-5 hours a day. I also include some fitness and Yoga in my routine because it helps focus and stamina on the table,” Natasha detailed about her rigorous training.

Regarding her academics, Natasha said that she is currently pursuing education at the National Institute of Open Schooling (NIOS). “I am in the 9th grade and will be writing my board exams next year. I usually take my classes in the morning and practice from the afternoon to the evening. I have opted for some interesting subjects which help my sport as well,” she added.

It was Pranit Ramchandani who spotted Natasha’s talent and he moved from Chennai to Bengaluru just to train her. When he realised that his coaching task needed skills, he went to the UK and acquired additional skills, Natasha recalled.

Natasha is the daughter of Leena Chethan and H.S. Chethan of Sakleshpur. Her grandparents Tara Chand Gupta and Mamta Gupta are residents of Vijayanagar 1st Stage in Mysuru. Natasha, her parents and her sister are now settled in Bengaluru. Leena is an art advisor who studied in Mysuru at Nirmala Convent, Mahajana College and did her MBA at the University of Mysore.