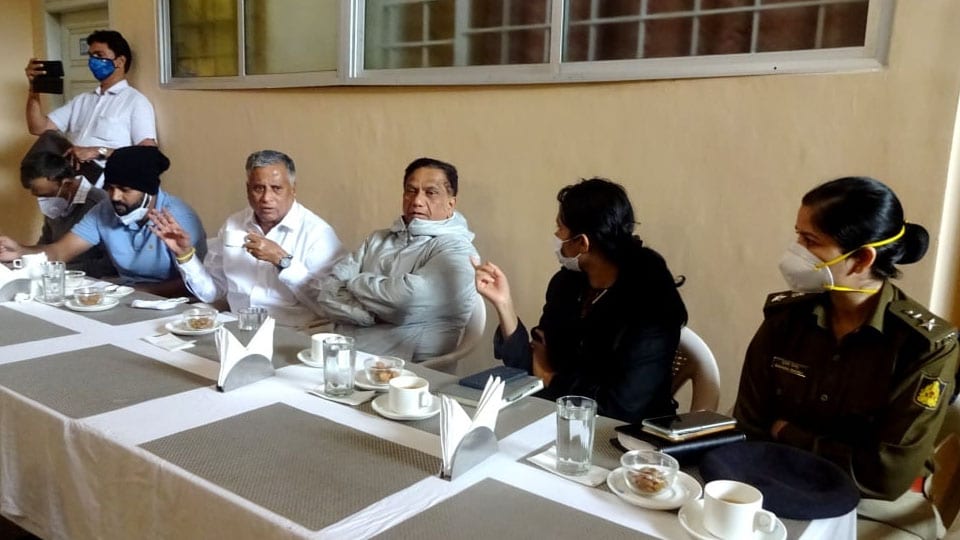 Madikeri: The puja and other rituals at Bhagamandala’s Bhagandeshwara Temple, which was disrupted due to landslides at Talacauvery, the birth place of River Cauvery, will resume soon.

The meeting resolved to restart puja and other rituals under the guidance of Tantris and the devotees once the Talacauvery Temple road is cleared for vehicular movement.

Speaking at the meeting, Bhagandeshwara Temple Management Committee President B.S. Thammaiah said that landslides that occurred near Talacauvery temple has disrupted daily pujas and rituals. Now it is necessary to restart the pujas under the guidance of Tantris.

Takka Chief Kodi Motaiah said that the pujas had to be stopped perhaps for the first time in the history of the temple due to huge landslides. Pointing out that the road to the temple has been blocked due to landslides, he opined that the daily rituals which were stopped a week ago must resume in keeping with the sentiment of the devotees, once the road is cleared.

District Minister V. Somanna said that the pujas and rituals must be carried out as per the customs and traditions without any further disruption. He also said that the temple authorities must ensure that there are no lapses in the conduct of rituals.

MLA K.G. Bopaiah said that there should not be any unduly worries about the idol of the deity in the temple. Pointing out that it is important to continue rituals at the temple, he said that the guidance of Tantris is the way forward in the conduct of rituals.

Taking strong exception to some media reports that Bramhagiri Hills have collapsed under heavy rains and landslides, Bopaiah sought to correct the media saying that landslides have occurred at Gajagiri Hill and not Bramhagiri Hill.

The temple Executive Officer Jagadish and other officials too were present.

‘I will stay in the district until the rescue operations are over,’ says Somanna

Asserting that he will stay in the district until the rescue operations are over, District Minister V. Somanna said that officials have been directed to regularly update him on the progress of rescue works.

Presiding over a meeting on Talacauvery landslides rescue and relief operations here yesterday, Somanna said that the rescue personnel have been asked to work in shifts and carry out rescue operations in an effective and organised manner with the use of Hitachi machines that have arrived at the spot.

Directing the Tahsildar and Public Works Department (PWD) Engineers to stay put at the spot for monitoring the operations, he reiterated that top officials of the District Administration should continuously brief him on the progress of works. He also instructed the Health Department to deploy an ambulance at the spot for meeting any medical emergencies.

Nikhil is scheduled to arrive at 10 am and first visit Brahmagiri Hill near Talacauvery, after which he will travel to Karadigodu, Nelya Hudikeri, Napoklu, Kushalnagar and other flood-affected areas of the district, according to Kodagu Youth JD(S) President C.L. Vishwa.

In a major development concerning rescue operations, the rescue workers this morning found an Omni Van and a Duster SUV belonging to Bhagandeshwara Temple Chief Priest Narayanachar, who along with four other members of his family, went missing after the huge landslide. Both the vehicles were found beneath mounds of mud at a distance of 20 ft from the house of the Priest. The vehicles are completely damaged.

Meanwhile, despite the resumption of rains from early this morning after a brief gap, the rescue and relief works are going on without any disruption under the constant monitoring of officials. However, the flood situation across the district is under control and no landslides were reported from anywhere in the district today.

In another development on Monday, the two daughters of Talacauvery Temple Priest Narayanachar, have been quarantined as the driver, who ferried them from the Airport to Madikeri, has tested positive for COVID-19. The two daughters, who are learnt to be living in Australia, arrived on Monday and were ferried from the Airport to Madikeri town in a Taxi. Later they visited the site of disaster and met District Minister V. Somanna who has been camping in the district for the past few days.

Thereafter, it transpired that the taxi driver tested positive for COVID-19, following which the two daughters were advised to go into quarantine, subsequent to the advise, both of them are in quarantine at Bhagamandala and were tested negative for COVID-19 this morning,  it is learnt.