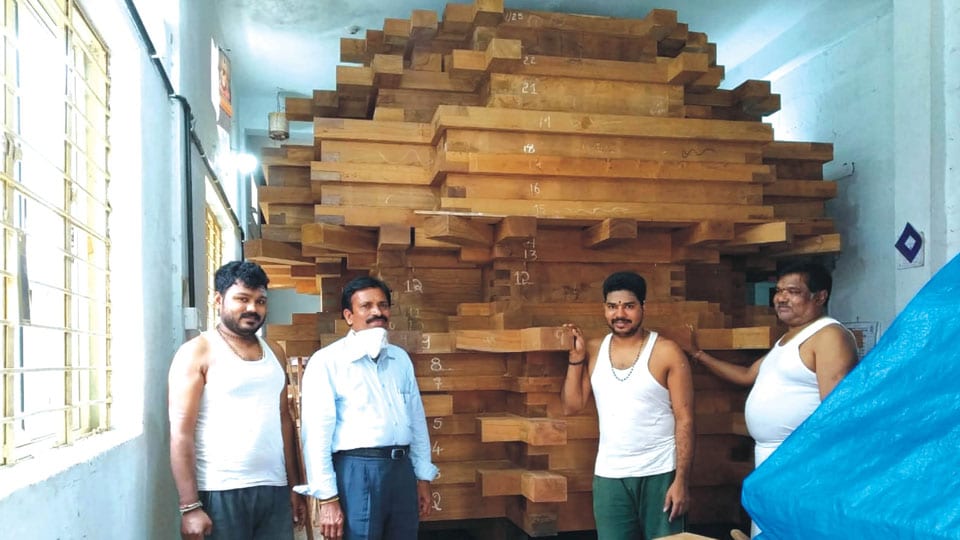 Chamarajanagar: As per the wishes of lakhs of devotees, the making of two Brahma Rathas (chariots) for Sri Chamarajeshwaraswamy and Sri Biligiri Ranganathaswamy is going on in full swing and they are expected to be ready for the next year’s Rathotsava.

The Brahma Rathotsava of Sri Biligiri Ranganathaswamy, which used to be held during April-May, had not been held since last four years, as the chariot was dilapidated.

Similarly, the Brahma Rathotsava of Sri Chamarajeshwaraswamy that used to be held during the Ashada Masa too had stopped nearly four years ago after some miscreants had set fire to the Brahma Ratha. This had disappointed devotees.

There was pressure on the temple management to take up the making of new chariots. Responding to this, the District Administration has come forward to get the new chariots prepared and has entrusted this work to Public Works Department (PWD).

The wood has been cut and has been kept for drying for over two months. Now, the same has been shifted to the company workplace in Bengaluru to start the works.

A team of artisans, led by B.S. Badigera, Shivakumar Badigera and Echaresha Badigera, have begun the sculpting works for the 16-feet tall chariots.

Priests of the two temples have been asked to take a look at the ongoing wood works and give necessary suggestions.

The making of chariots for both Sri Biligiri Ranganathaswamy Temple and Sri Chamarajeshwaraswamy Temple is going on in full swing. While the Rathotsava of Ranganathaswamy is held on Chitta Nakshatra day during April-May, the Rathotsava of Sri Chamarajeshwaraswamy is held during Ashada Masa. We are planning to conduct both Rathotsavas during next year,’ says Dr. M.R. Ravi, Deputy Commissioner.