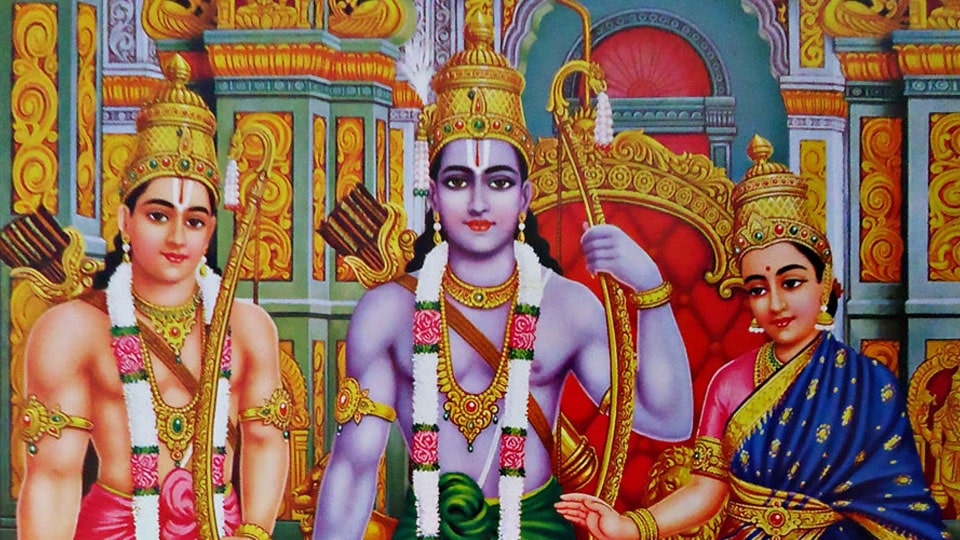 The great poet Maharshi Valmiki has immortalised Sri Ramachandra. Actually Maharshi Valmiki asks Narada a question ‘Was/is there a human being who is of excellent character, who is capable of heroism, who knows the secret of dharma and a follower of it; one who is grateful to those who have helped in times of need; one who always speaks the truth and nothing but the truth and does such a great person exist in this world?’

The great Maharshi Valmiki knew everything but for the benefit of the common man, Narada narrated the whole story in detail. Narada said, ‘You have asked a very good question and I will tell you about that person Sri Ramachandra in detail.’ Brahma, the mythological creator asked sage Valmiki to narrate the story of Sri Rama in all details. Thus firm foundations were laid to narrate the story of a person who has become immortal all over the Hindu world.

The present generation may not be aware of the politics that went on about Ramayana in general and Sri Rama in particular. It was a time when some people from extreme South had propounded the theory of Dravidians and Aryans. Cultural anthropologists propounded a theory which envisaged that the Dravidians were the original settlers of South India and the Aryans came from outside. Sri Ramachandra was considered an outsider representing Aryan culture and there was an opposition to worship Sri Ramachandra who is an outsider. They even began distorting Valmiki’s Ramayana. According to them Sri Rama was an ascetic always interested in Vedic sacrifices and neglected his wife. Disturbed by this Sri Rama’s devoted wife Sita ran away to Sri Lanka where Ravana was the king, an attractive hero. Thus Ramayana was being distorted to unimaginable levels.

At that time our first Prime Minister Jawaharlal Nehru brought an Act against distorting our ancient epics like Ramayana and Mahabharata. Thus the hate campaign was put an end to by this Act. At this juncture it was asked why a person who hated Sri Rama had a name involving Rama. His name was Ramaswamy Naicker. People asked him about his pro-Aryan name Ramaswamy but he gave a clear reply. I am clear in my mind about my concept. Ramaswamy means the master of Rama and I mean Ravana and hence I have not welcomed the Aryan Sri Rama.

The late Karunanidhi went a step further in this direction. A bridge was built over the sea to cross over to Sri Lanka and to wage a war against Ravana. Karunanidhi asked the question in which Engineering College Sri Rama studied the technique of constructing the bridge. At that time the admirers of Karunanidhi thought that they have won a battle but all those persons have been forgotten and thrown into the dustbin of history. Sri Rajaji tried to patch up this hate campaign and arranged a marriage between a Dravidian and an Aryan but nothing worthwhile happened. It was then Rajaji wrote a concise history of Ramayana and it was published by Bharatiya Vidya Bhavan (BVB) and it was priced just Rs. 50 and millions of copies were sold and many editions were published. It was considered the best gift to be given in marriages, upanayana, house warming ceremonies etc. Now this is history.

Now let us come back to Sri Rama. He was considered as an avatara of Vishnu himself. As Lord Sri Krishna has put it in vivid terms, avatara of great persons takes place whenever there is a need. When wicked persons become powerful and begin to torment the good people, Lord Krishna has given an assurance that almighty will be born again and again. Such a great concept is hard to find in other philosophies.

Sri Rama was considered as an ideal person from all standards and hence Dasharatha considered Sri Rama to succeed him. Lakshmana, Bharata and Shatrughna immediately agreed to their father Dasharatha’s proposal of announcing Sri Rama as the king of Ayodhya who was born in Ikshvaku race. Lakshmana, Bharata or Shatrughna could have claimed their right too but they did not do so because even the brothers thought that Sri Rama was better than them and in fact the best. This shows the brotherly love and respect for Sri Rama. Hence, people began to say that Ramo Vigrahavandharmah meaning Sri Rama is Dharma personified.

Rama believed that dharma is supreme and its status should not be lowered at any cost. That is why the famous dictum Dharmo rakshati rakshitah meaning dharma protects those who protect dharma itself. What a noble thought indeed !

In our tradition, there is a purushartha consisting of dharma, artha, kama and moksha. Even Kautilya has enumerated such a system. But artha, kama etc., can work only with the support of dharma and without dharma the other qualities become lame and blind. Because of all these noble qualities, Sri Rama has been considered as Maryadapurushotham meaning respectable and best human being.

Ramayana became so popular that it has been translated to many languages like Tamil, Telugu, Hindi etc. In Tamil, Kamba Ramayana is very famous while in Hindi Ramacharitamanasa is well-known. In addition, this work based on different philosophical concepts like Vasishtha Ramayana are available. Though approaches are different, the kernel is the same as to extol Sri Rama.

In our own times, Kuvempu has written a work titled Sri Ramayanadarshanam and has dedicated this to the famous professor of Taluku family. One should read this portion of dedication and it reflects the respect Kuvempu had towards his guru who was a mine of good qualities and truth.

Dr. Veerappa Moily, a former Chief Minister of Karnataka, has also written a book based on Ramayana. Thus hundreds of works have been written based upon this epic.

Ramayana crossed the boundaries of India and reached different parts of the world. In sculpture and architecture, the story of Ramayana has been depicted which have been admired all over the world. A French archaeologist by name Pelliot has remarked that even today women weep over the travails of Sri Rama’s wife Sita.

Many persons considered Ramayana as a literary bunkum created by the Aryans. But Archaeologists like Dr. B. B. Lal visited the places mentioned in Ramayana and have found evidences for the existence of Sri Rama. This has proved beyond doubt the truth of Sri Rama as a great human being.