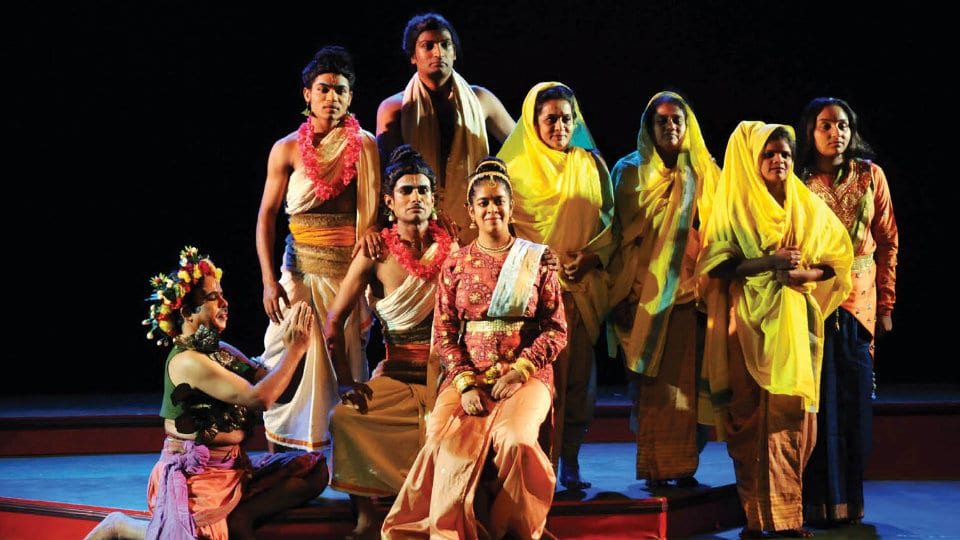 Mysuru: The four-and-a-half-hour ‘Sri Ramayana Darshanam,’ the play adapted from the epic poem of the same name penned by Jnanpith awardee and Rashtrakavi Kuvempu, had the audience mesmerised at the Bhoomigeeta in Rangayana premises yesterday.

A mix of both old Kannada (Hale Kannada) and new Kannada (Hosa Kannada), the play staged by Rangayana in association with Kannada and Culture Department begins with the opening dialogues by an actor donning the role of Kuvempu thus, ‘This is an epic poem; not history; this is not just a story; not confined to a story; it is like a soul to the body.’

The actor’s dialogue completely captured the attention of the theatre-lovers.

Continuing, the Pattabhisheka of Sri Rama and the old Kannada dialogues further amazed the people. Mantara’s evil, malicious words and Kaikeyi who tricks a promise from king Dasharatha and stops Rama’s Pattabhisheka in the middle which Sri Rama calmly accepts as he is the Maryada Purush who obeys his father and walks away with his wife Seetha and brother Lakshmana to the forest wearing saffron colour clothes brings tears to everyone.

Bharatha and Shatrugna who  hear the news about Sri Rama’s vanavas go in search of Sri Rama into the forest and finally meet him to inform about their father Dasharatha’s death and then requests him to return to Ayodhya. Sri Rama tells them that he cannot return to Ayodhya without fulfilling his father’s wishes and then extracts promise from Bharatha to ascend the throne and rule Ayodhya till he returns. The moving scene of Bharatha refusing to accept his elder brother’s order and with tears in his eyes asking his brother how he could rule in his absence? moves the entire audience.

As the story advances using the old Kannada dialogues, Ravana’s sister Shurpanaki pesters Rama-Lakshmana to marry her and when they refuse, she goes to her elder brother Ravana to complain.

Incensed with the behaviour of Rama-Lakshmana cutting the nose and ears of Shurpanaka, Ravana in the guise of taking revenge kidnaps Seetha with the help of Marichaka.

Marichaka in the guise of a golden deer passes swiftly before Seetha who on seeing the beautiful golden deer pleads with her husband Sri Rama to hunt the deer for her sake. He leaves behind Lakshmana to protect Seetha in his absence and goes in search of the deer. Seetha then forces Lakshmana to join his brother in the hunt.

As soon as Lakshamana leaves the ashram, Ravana appears in the guise of Marichaka and kidnaps Seetha and takes her away in the Pushpak Vimana. The bird Jatayu who sees Ravana taking away Seetha tries to stop and Ravana kills the bird and brings Seetha to Lanka.

In the middle, the scenes of Vali-Sugreeva fight and Vali killing a demon brings the stage alive. Finally, Sri Rama, Lakshmana along with Sugreeva, Hanuman and his monkey army laying siege to Lanka and returning with Seetha to Ayodhya is a fascinating tale that the Rangayana theatre repertory brings to the city theatre-lovers.

Each actors playing his or her role to perfection, excellent costume designing, lighting and music all add to the allure of the play and clearly proves the talent of Rangayana artistes in bringing to stage the epic poem.

As the show for the next three days is already houseful, Rangayana on public demand has decided to stage the play on Nov.27 and 28 at Kalamandira. Tickets for both the shows are available at Rangayana Office, according to a press release from Bhagirathi Bai Kadam, Director, Rangayana.