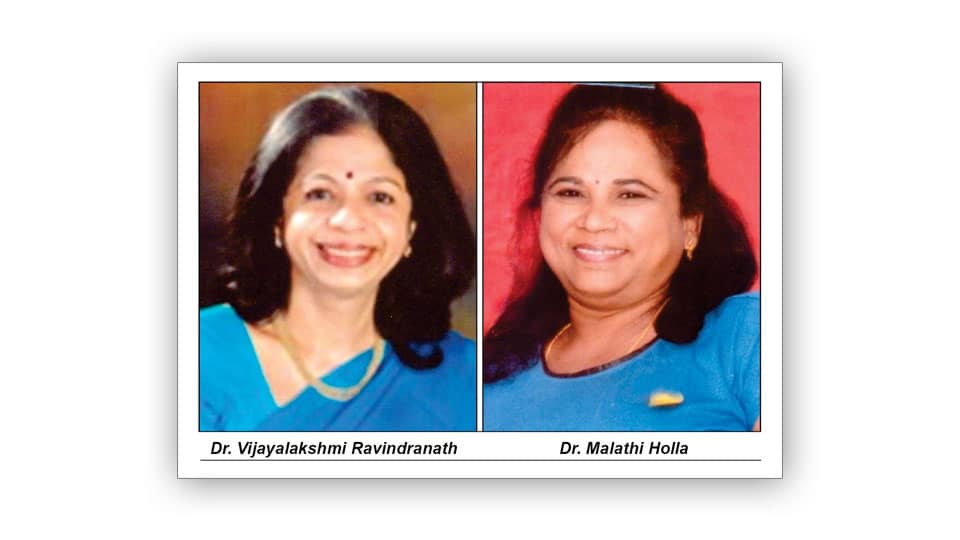 The Charitable Trust, founded by Padma Shri Dr. Mathoor Krishnamurthy in 2009, will be felicitating two illustrious women this year, who have been the recipients of the prestigious ‘Padma Shri Award’ for their distinguished contribution in their respective professional fields.

Renowned Neuroscientist Padma Shri Dr. Vijayalakshmi Ravindranath, Chairperson of ‘Centre for Neuroscience’ Indian Institute of Science (llSc), Bengaluru, will be conferred Sri Vanamali Seva Award while Padma Shri Dr. Mathoor Krishnamurthy Award will be bestowed on well-known sports icon, Padma Shri Dr. Malathi Holla, an international gold medallist in the Paralympic Games, who also is the founder of ‘Mathru Foundation’ which has been the guardian angel for physically challenged in the country with their unconditional support and care.

The awardees will be presented with a cash prize of Rs. 25,000, Sri Vanamali idol and a citation each.

Profiles: Dr. Vijayalakshmi Ravindranath: Vijayalakshmi Ravindranath was born in October 1953. She earned her B.Sc. and M.Sc degrees from Andhra University and received her Ph.D. (Biochemistry) in 1981 from Mysore University and worked at the National Cancer Institute, USA as a Postdoctoral Fellow. She joined the National Institute of Mental Health and Neurosciences (NIMHANS), Bangalore in 1986, where she studied the metabolising capacity of the human brain, focusing especially on psychoactive drugs and environmental toxins.

In the year 1999, she established the National Brain Research Centre (NBRC). In a short span of three years, she established a state-of-the-art institute in a remote location and initiated a unified approach to understanding the human brain, integrating mathematical and computational science. She networked 45 institutions around the country with NBRC with a goal to share resources and establish several pan-Indian efforts in brain research.

Since 2009, she has been serving as a Professor/Chairperson at the ‘Centre for Neuroscience,’ Indian Institute of Science, Bengaluru. She is currently engrossed in her tireless work towards the aggrandizement of the ‘Centre for Brain Research’ to greater operational heights.

The unifying goal of her laboratory is to understand pathogenic mechanisms underlying neurodegenerative disorders, such as Parkinson’s and Alzheimer’s disease with a goal to discover disease-modifying therapies from traditional knowledge base. She is a recipient of the prestigious S.S. Bhatnagar award (1996), Omprakash Bhasin Award (2001) and the J.C. Bose Fellowship (2006) and the fourth highest civilian award in India, Padma Shri (2010).

Dr. Malathi Holla: Malathi Holla was born on 6 July 1958 in Bengaluru. A raging fever when she was a year old left her paralysed from the waist down. Back then, there was little awareness about dealing with differently abled children and she spent most of her childhood away from home, at a disability care centre in Chennai. She lived there for 15 years, till she completed her 10th std.

During her adolescence, Malathi had to undergo close to one surgery every six months, adding up to a total of 32 surgeries in her growing years. She faced physical pain, suffering and mental trauma. She not only survived them, but thrived on them to become one of the most inspiring sports personalities of modern India. She has represented India in the Paralympics held in South Korea, Barcelona, Athens, and Beijing; the Asian Games held in Beijing, Bangkok, South Korea and Kuala Lumpur; the World Masters held in Denmark and Australia and the Commonwealth Games in  Australia and Open Championships in Belgium, Kuala Lumpur and England.

Dr. Malathi Holla founded a Charitable Trust called ‘Mathru Foundation’ along with her friends in 2002 that shelters 17 children with various disabilities. The Foundation focuses mainly on polio victims from rural areas, whose parents cannot afford to send their child to school or provide medical treatment. Malathi Holla’s story truly is an example of the triumph of the human spirit over physical handicap. Her biography, ‘A Different Spirit,’ released in 2009, has been inspiring thousands of people to rise over their physical disabilities.