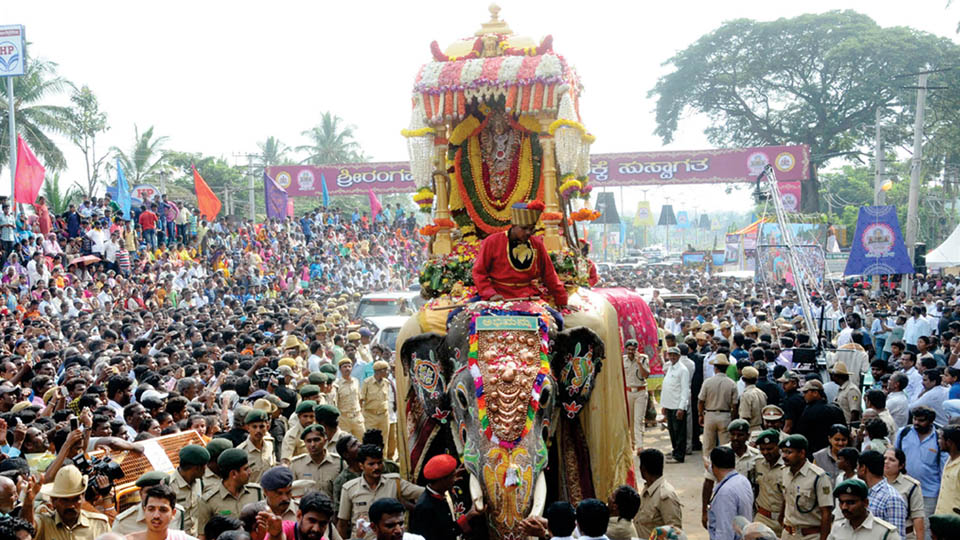 It was heartening to note that  Dasara celebration was being revived at Srirangapatna on a grand scale reminiscent of the bygone era (SOM dated Oct. 17).

The report stated “CM H.D. Kumaraswamy inaugurated the event by offering flowers to the idol of Goddess Chamundeshwari placed in a wooden Ambari on the caparisoned elephant Abhimanyu at Bannimantap near Kiranguru Circle off Mysuru-Bengaluru Highway.” This is nothing but making a mockery of history. To call a nondescript small Mantap as the famous Banni Mantap of yore is an insult to the legacy of Wadiyars.

Here are some historic facts:

Sir Mark Wilks, who wrote the first definitive History of Mysore after collecting information — both oral and through scriptures during his term as Resident of Mysore,  writes thus in his book, Historical Sketches of the South Indian History:

“On the morning of the 12th of August, the day on which they were expected to arrive, the gates of the Fort were not opened at the accustomed hour; and with the first of clear daylight, a tremendous cannonade opened on Hyder and his troops from all the works which bore on the position; which was the Maha Noumi Muntup, situated on the ground now occupied by a part of the Deria-Dowlut Baug….”

“The pavilion of the great ninth,” namely the last day of the festival commonly called the Dessara: on which day the Raja performed at this pavilion the ceremony of preparing his arms and pitching his tent and standard. ”

Similarly he also elaborates on Deria-Dowlut Baug as:

“The garden of the wealth of the sea” with a Palace erected and so named by Tippoo. The walls are covered with rude paintings of his military exploits, and particularly the defeat of Colonel Baillie in 1780.”

Thus Wilks clearly establishes that the present Deria Daulat Garden was the place where the Maha-Naumi Mantap was located. This was the place where Hyder had camped when his one time protege Dewan Khande Row attacks him from the ramparts of the Fort.

Kirangur is on the other bank of Cauvery and it is unrealistic to expect Ranadhira and his large entourage would cross the river to perform the Navami puja ! Besides, the so called Mantap is too small for a Royal Durbar !

In a similar work edited by Ti.Ta. Sharma called ಹೈದರ ನಾಮಾ, the author repeats the above narration:

Again in another place in the same book the author says:

Thus these records put things beyond doubt that Mahanavami Mantap was within the island and outside the Fort and Hyder and army normally used to camp at this place and it was here he built Deria Daulat.

READ ALSO  Demonic Democracy? Are we casual in dealing with serious issues?

The fact that one of the three branches of Banagara Doddi Canal built by Ranadhira culminated at Deria Daulat Baugh also adds credence to this fact.

Lastly, in the Kannada classic by Govinda Vaidya, the court scholar of Ranadhira in his famous work “Kantirava Narasaraja Vijaya” while describing Vijayadashami procession says:

One wonders who is behind the above inspired story of calling a nondescript Mantap as the Mahanavami – Shami Mantap !

This should stop and the historic truth should prevail.

If the State really wants to revive the famous Dasara which originated at Srirangapatna in 1610, then the procession should start from Janana Mantap (where the old Palace of Wadiyars existed) of Maharaja Mummadi Krishna Raja Wadiyar and end at Deria-Dowlut Baug.

Voice of The Reader
Musings on Dasara Exhibitions down the ages…
Wins ‘Mr. Photogenic’