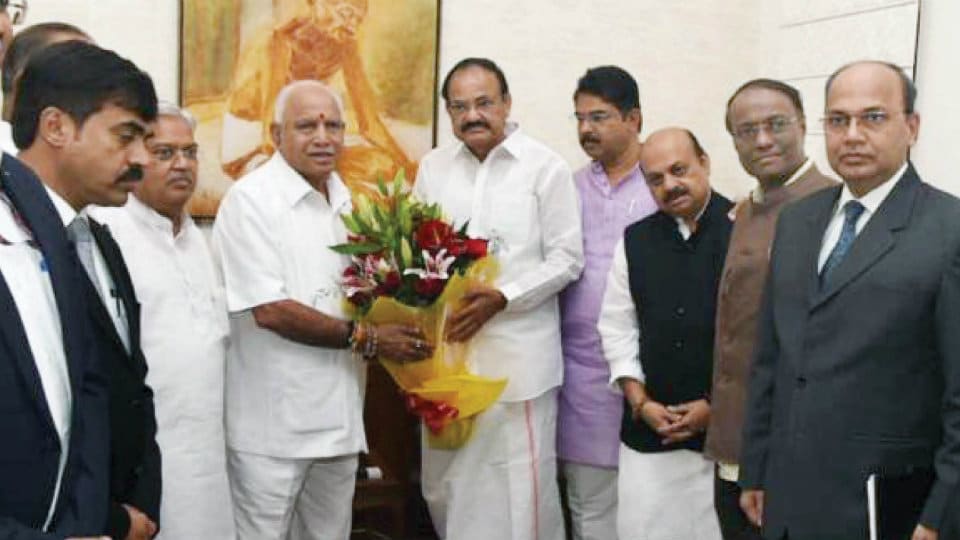 New Delhi: With the BJP central leadership busy in analysing the situation after tabling the Jammu and Kashmir Reorganisation Bill-2019 in Lok Sabha this morning, a day after it was passed in Rajya Sabha, Chief Minister B.S. Yediyurappa, after conducting an aerial survey of the flood situation in northern part of Karnataka, arrived in New Delhi last night to hold meetings with the party top brass on Cabinet expansion.

Yediyurappa, who has lined up as series of meetings in the National Capital, paid a courtesy visit to Vice President Venkaiah Naidu at his official residence at 9.45 am this morning.

CM Yediyurappa is also likely to meet Union Parliamentary Affairs Minister Pralhad Joshi later today. However, the time has not been fixed yet.

This will be followed by a dinner meeting with Karnataka MPs at Karnataka Bhavan at 7 pm. Yediyurappa is likely to discuss various issues related to the State including drought and flood situation apart from asking the MPs to exert pressure on the Central Government to release pending funds to the State.

According to sources, Yediyurappa is expected to stay in New Delhi for the next couple of days and return to Bengaluru only after finalising the list of Ministers. He has been facing flak from the Opposition for not expanding his Ministry despite being sworn-in 10 days ago.

READ ALSO  FASTags mandatory for all four-wheelers from Jan.1

With a long list of aspirants, Yediyurappa has a tough task in finalising his Cabinet and also pacifying those MLAs who may not make it to his Cabinet.

Sources said that 15 MLAs are likely to be sworn-in as Ministers in the first phase and the remaining vacant berths are expected to be filled after the issue related to the disqualified MLAs reaches a logical end.

On his arrival at the Karnataka Bhavan at around 11.30 pm yesterday, CM Yediyurappa was received by MPs Umesh Jadhav and G.M. Siddeshwar and former Minister Baburao Chinchanasur.