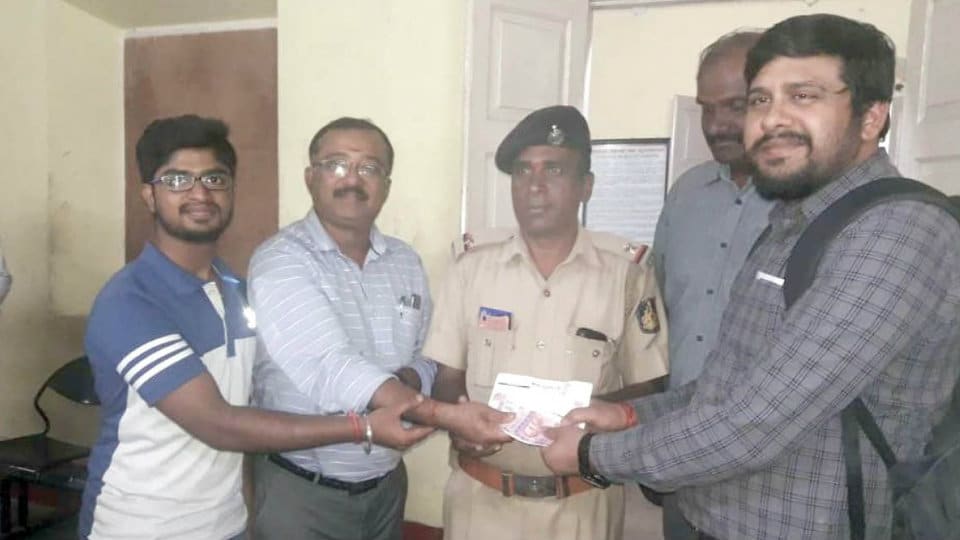 Mysuru: The honest deed of an engineering student Anirudh and his father Raghavendra bore fruits when the man who had lost Rs. 60,000 received it from city’s Devaraja Police, here yesterday.

Aryan, a bank manager at one of the banks in Indunagar at Ooty, received the money from Anirudh and Raghavendra in presence of Devaraja Police at the Police Station last evening.

Aryan, is said to have lost the money accidentally, while he was travelling in a cab towards Bengaluru. The Police, who contacted the bank based on the challan found along with the note bundle, discovered that the money belonged to one Aryan. He was contacted yesterday and was asked to visit the Police Station along with supporting documents.

After receiving the money, Aryan thanked the good Samaritan father-son duo before leaving the city.  It may be mentioned that Anirudh and Raghavendra, residents of Thogari Beedi in city, had found the bundle of cash of Rs. 60,000 of Rs. 2000 denomination near the Dargah located on the busy Krishna Vilas Road on Sunday last. Later, they had handed over the money to jurisdictional Devaraja Police on the advice of Star of Mysore.