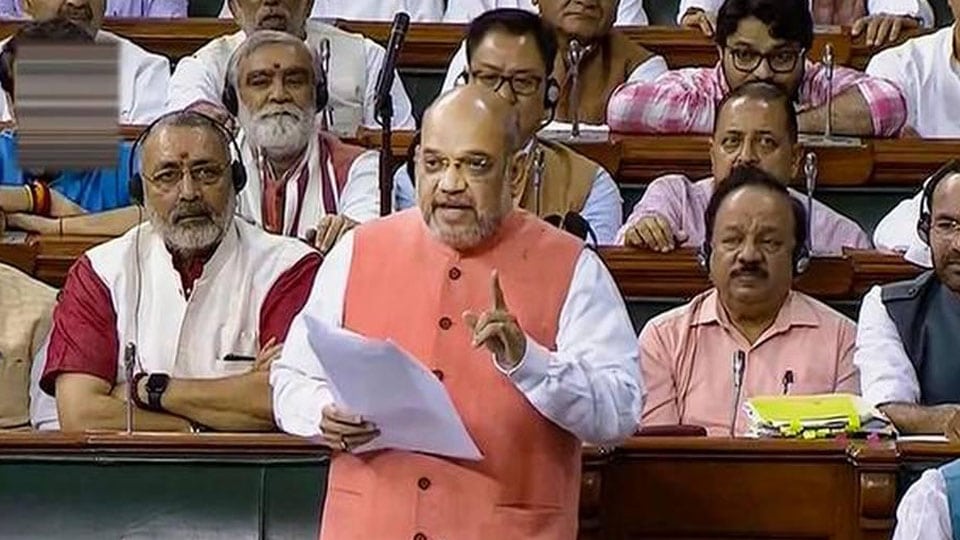 New Delhi: A day after the Bill scrapping Article 370 and Article 35(A) was passed in the Rajya Sabha on Monday, Home Minister Amit Shah today moved the resolution to revoke Article 370 in Jammu and Kashmir, in the Lok Sabha. He also introduced Jammu and Kashmir (Reorganisation) Bill, 2019 in the Lower House of Parliament.

Jammu and Kashmir is an integral part of India and it includes PoK (Pakistan-occupied Kashmir), Amit Shah said as he addressed the Lok Sabha on the tectonic move to end special status for J&K under Article 370 and to bifurcate the State into two Union Territories.

Shortly after Amit Shah tabled a resolution to this effect in Rajya Sabha yesterday, President Ram Nath Kovind came out with a notification — The Constitution (Application to Jammu and Kashmir) Order, 2019 that will come into force immediately.

Amit Shah explaining the legal and Constitutional basis of the Reorganisation Bill said, “According to Presidential order from yesterday, by Article 370 (1d) all the Centre’s laws will apply to the State of Jammu and Kashmir. There is a resolution according to which using Article 370 (3), Article 370 can be scrapped.”

Outgoing Congress President Rahul Gandhi today hit out at the Government over its decision to revoke Article 370 that gave J&K special status and said the abuse of executive power has grave implications for national security.

West Bengal Chief Minister and Trinamool Congress leader Mamata Banerjee has said that she is not discussing the merit of revoking Article 370, but was against the procedural lapses.

There are no untoward reports from anywhere in the State, Director General of Police (DGP) Dilbagh Singh said from Srinagar.