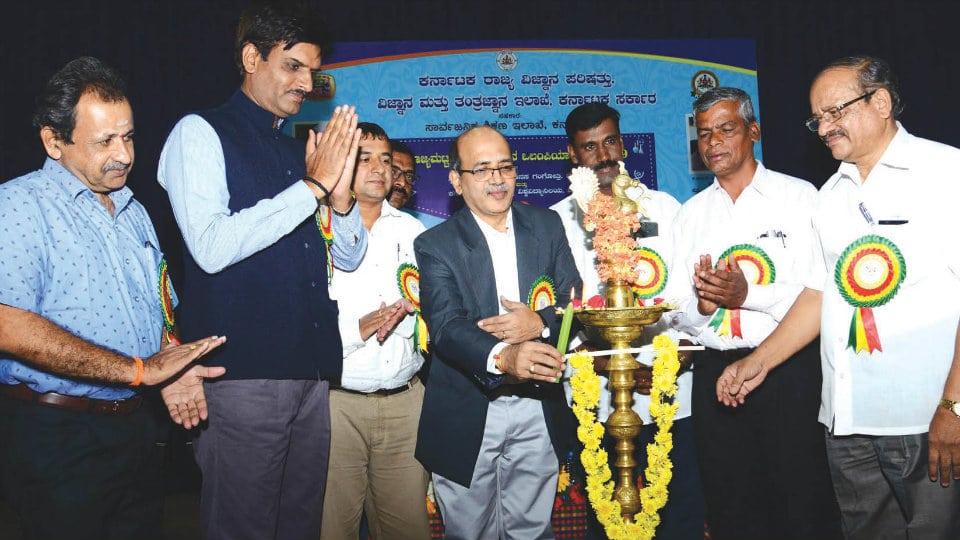 Mysuru: A two-day State-level Mathematics-Science Olympiad for the first three winners at the District-level event, organised jointly by Karnataka Rajya Vijnana Parishat (KRVP), Department of Science and Technology and Department of Public Instruction at Vijnana Bhavan in Manasagangothri here, will conclude this evening.

Yesterday, about 100 students of 9th standard of various schools in the State appeared for the Olympiad which was held from 11 am to 1 pm and 2 pm to 5 pm to test the powers of the students in Science and Mathematics in objective and subjective formats.

All the participants who have emerged winners at the District-level will be awarded a cash prize of Rs.2,000 each and the first three winners in the State-level Olympiad held yesterday will receive Rs.10,000 each.

Inaugurating the programme yesterday, CFTRI Director Dr. KSMS Raghava Rao opined that the scope of learning among students should be expanded and added that teachers should nurture the curiosity of students.

He said that mother tongue of a student is important but contended that knowledge of English too is equally necessary.

He asserted that Mathematics being logical subject was the mother of all subjects. He strongly felt that a very rigid frame should not be fixed while learning a subject which would curtail the inquisitiveness of a student.

The valedictory and prize distribution will be held today.