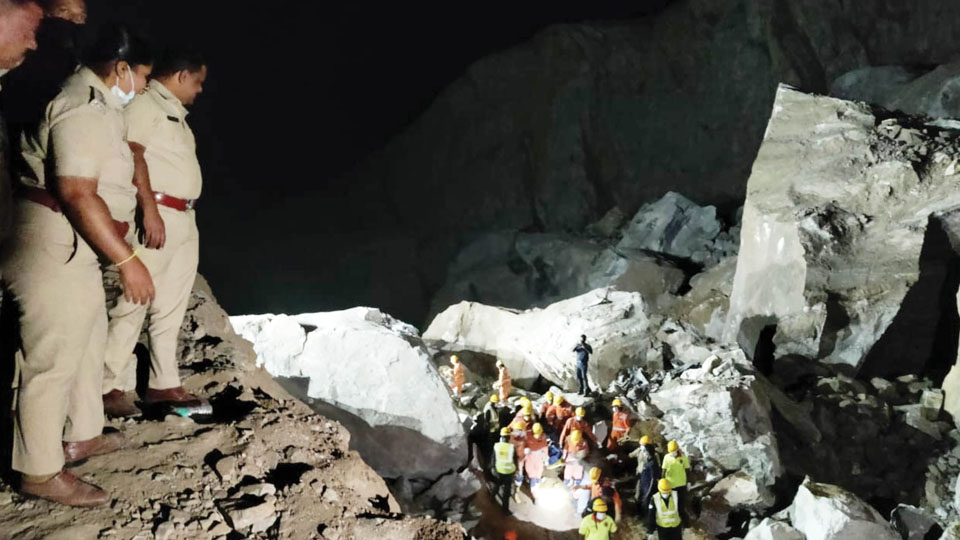 The rescue operation began at about 6 am yesterday. As huge rocks and boulders had fallen over earth excavating machines, the rescue teams after obtaining permission from the officials concerned, using small quantity of explosives, blasted the rocks and boulder and retrieved the body of Miraj at about 4.30 pm.

Though the teams continued the operation, huge boulders and rocks again hampered the rescue. Though discussions were held to stop the rescue operation at 6 pm and continue the same on Monday (today), the officials decided to continue the rescue for some more time and the teams again began the operation to locate those trapped underneath rocks and boulders as they were getting the smell of decomposed bodies. At about 8 pm, the rescue teams pulled out the body of another worker identified as Sarfaraz.

In all, there were 24 workers at the quarry site, when the incident took place. Of them, 21 have been accounted for. As the NDRF, SDRF and Fire Department rescue teams retrieved the bodies of three workers, they ended their rescue operation last night and returned back.

It may be recalled that the stone quarry crashed around noon on Friday and three persons were trapped under huge rocks and boulders, though initially it was feared that many were trapped underneath. The rescue operation began on Saturday and after 11-hour-long operation, the rescue teams were able to pull out one body. Yesterday, after a 14-hour-long operation, two more bodies were retrieved.

Deputy Commissioner (DC) Charulata Somal yesterday went on an inspection spree and visited more than 10 quarries to check the legalities. The DC has continued the inspection of quarries today too. Mining and quarrying activities have been suspended and will remain in place till the DC certifies that the extraction process is legal and complies with Government norms. A special team, headed by the DC, was constituted to inspect all mines, quarries and crushing sites in the district to ascertain if there were any irregularities.

Chamarajanagar District Minister V. Somanna also visited the site on Saturday and as per his directives, only those quarries that are functioning as per norms would be allowed to continue and the rest will be closed.