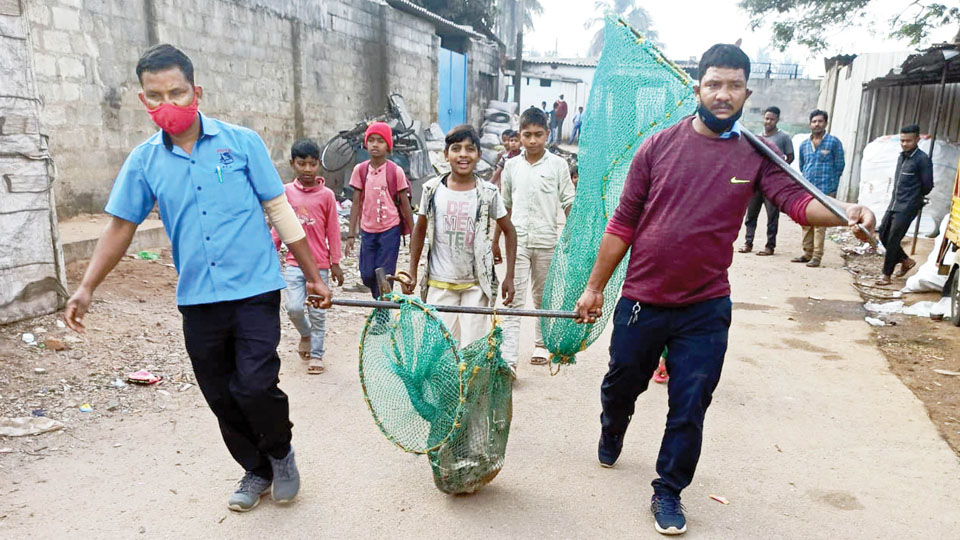 Mysore/Mysuru: While residents of the city are an annoyed lot as they have to bear stray dog nuisance, especially with continuous barking and often obstructing vehicular movement during peak hours, the Mysuru City Corporation (MCC) has claimed that it spends Rs. 3,40,000 per month to sterilise over 300 to 400 dogs.

Along with stray dogs, pigs too roam all over and there is no mechanism to control the menace. Owners just let out their pigs in the open and this contributes to the spread of communicable and non-communicable diseases.

The MCC Council meeting held yesterday elaborately discussed the issue where Corporators alleged that it is a clear case of lethargy where the authorities are moving slowly in sterilising dogs. Despite tall claims of sterilisation, the dog population has doubled and tripled over the years. Sterilisation drives should be taken up at regular intervals, they demanded.

Responding to this, MCC Health Officer Dr. D.G. Nagaraj said that the dog sterilisation process is being carried out with the support of NGOs and every month over 300 to 400 dogs are being neutered and Rs. 850 is being paid to sterilise one dog, he said. He added that the strays caught by the MCC personnel are also handed over to the NGOs for neutering and releasing them in their respective areas. Intervening, Corporators questioned that if 400 dogs are sterilised every month and the MCC spending Rs. 3,40,000 per month, then why the menace has not reduced and has only increased.

Corporator K.V. Sridhar said that an investigation must be launched on how the sterilisation money is being spent and how effectively the MCC is able to control the stray dog menace.

“MCC teams catch stray dogs using the Corporation vehicles and these dogs are handed over to the NGOs. But why Rs. 850 is paid for a job that is done by the Corporation staff,” he questioned.

Former Mayor Ayub Khan demanded that a committee be constituted to probe this issue and check for misappropriation of funds.

MCC Commissioner G. Lakshmikantha Reddy said that special drives will be carried out in the next one month to control the stray dog menace.