Home » COVID-19 » Stray dogs will not go hungry in Mysuru 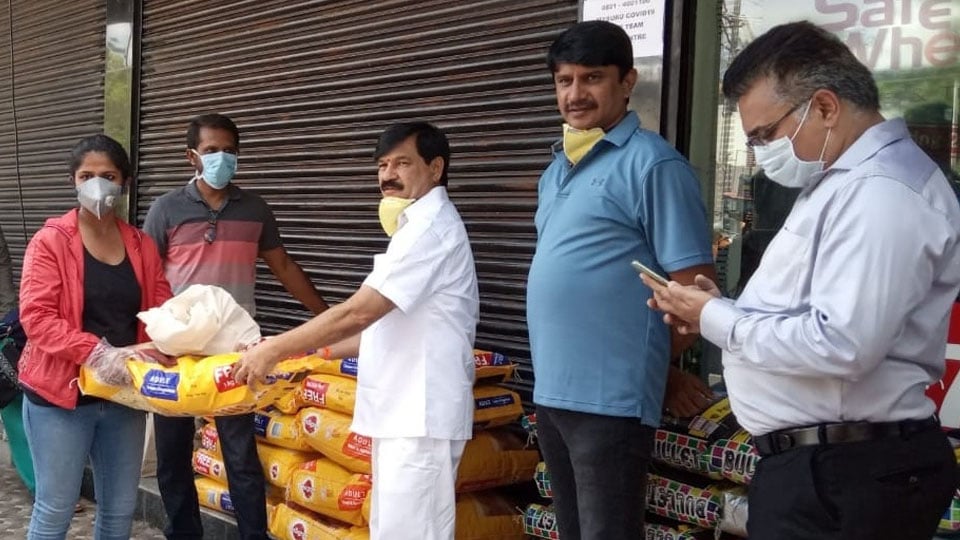 Stray dogs will not go hungry in Mysuru

Mysore/Mysuru: Apart from delivering essential commodities and cooked food to people at their doorstep during the lockdown, Mysureans are also feeding stray animals and monkeys.

Thousands of stray cats and dogs depend on food and waste from markets, restaurants and grocery shops. But with Coronavirus sending people into isolation and public establishments shutting down, strays are having a hard time finding food.

In a bid to provide food for stray dogs and to help those feeding the strays, the Mysuru Covid Care team, led by MLA S.A. Ramdas provided dog food to feeders at Saraswathipuram this morning.

Though 45 dog food feeders had registered, only 15 feeders received the dog food and each feeder was given a 20 kg pedigree bag, 25 kg rice and 25 packets of biscuits. Ramdas said that there were plans to establish a Stray Dog Rehabilitation Centre in Mysuru and the procedures for the same would begin after the lockdown ends. He also said that a letter pertaining to the issue has been sent to the Animal Husbandry Departments of both Central and State Governments.

Ramdas said that he would convene a meeting of dog feeders after the lockdown ends and a committee would be formed. Ramdas said that an appeal was made to the residents of his constituency (Krishnaraja) to feed stray dogs which received many positive response.

As many dog lovers had taken up the responsibility of feeding stray dogs in city, the Mysore Covid Care Team has identified them and distributed dog food, he added. Let’s do it! Mysore President B.S. Prashanth, Bhashyam and Ranjini of Let’s do it! Mysore and others were present.