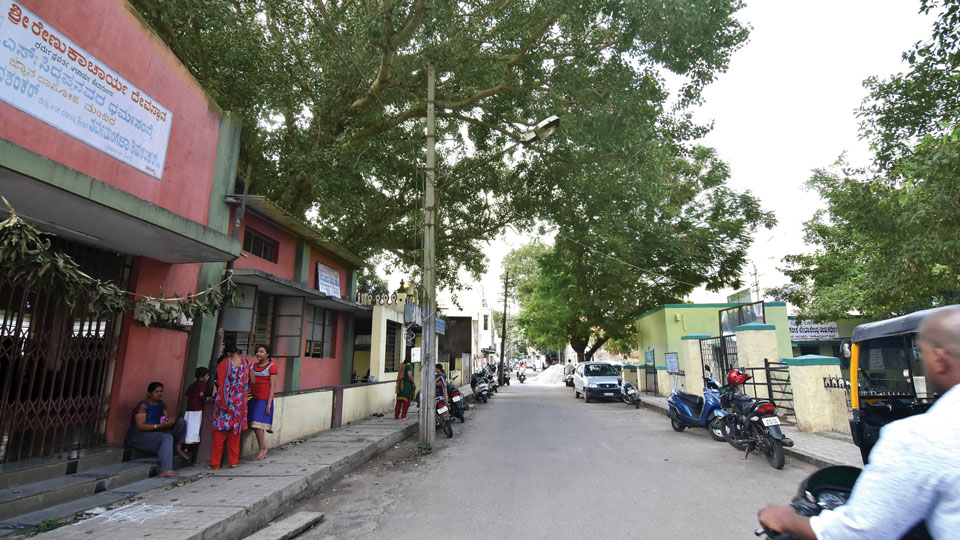 Street Stories: What’s in a Street? Name and Fame

Googling Mysuru Heritage Streets indicates long stretches of roads connecting main roads and thoroughfares with many small and lesser-known streets with its sections still referred to by old names. This dichotomy and historical ecosphere is sprinkled across the map of Mysuru and there is a mix of the archaic and avant-garde names, where British officials and Wadiyars share avenues with Indian luminaries and local heroes.

Many roads present a densely-packed urban fabric with a rich architectural heritage from the Wadiyar period. The Heritage streets of the city still have their unique charm, some of them bearing interesting history of the past.

Join Senior Journalist Gouri Satya in this Weekend Star Supplement on a quest of Mysuru city’s finest stories behind the names of streets and explore the nooks and crannies.

What’s in a Street ? Name and Fame

Like Mohallas, Purams and Keris, streets in Mysuru have history to tell us. Many of the streets in the old city have hidden stories behind them and if compiled it can become a separate volume. They have so much of history to reveal we know very little or nothing of it.

These historic names have contributed much to the culture and heritage of our old royal city, about which we should take pride. Let me try to bring to the fore the hidden history of some randomly chosen streets in this article. Besides these, many other old streets and roads in Mysuru have hidden history to reveal. It is well worth tracing their historic background and walk back in time to the days of old royal Mysuru, may be of the period of Tipu Sultan or the Wadiyars.

It is these old streets, Mohallas and Keris, and landmark buildings and roads of the colonial era, which have contributed to the history and culture of Mysuru. This hoary past of history and heritage of this great city, a city of the royals and their dedicated subjects, needs to be preserved and protected, instead of destroying it. It is on such places cities elsewhere have built up their popularity and entered into the UNESCO heritage sites.

Pond of Goddess and Shiva Temple

The Devi Kola which literally means a pond of the Goddess on the Ramanuja Road. Apart from this beautiful pond amidst concrete structures, there is a temple of Kashi Vishwanatha or Eshwara inside the structure that at present looks like a haunted house.

Regular pujas are conducted inside the temple and there is a stream of visitors who come here every day. While the younger generations are unaware of this temple, many elders come here.

Local residents say that the property belongs to erstwhile Mysore royal family. The pond was earlier used by the residents to immerse Ganesha idols and due to the constant idol immersion, the pond was closed with weeds growing all over.

Three years back, a team of Good Samaritans cleaned up the pond and now a protective concrete wall has been built around the pond to prevent people from falling into the water. All local festivals including Maari Habba and marriages used to start earlier from this point. It was a starting point for the women to carry the auspicious Kalasha for any event.

Soppina Kola Street in Agrahara of Krishnaraja Mohalla connects the Chamaraja Double Road with the Vani Vilasa Road. This street is now named as Renukacharya Street. As the very name indicates there was a small pond there and poor women of the area made a living by growing greens (Soppu) and sold them. Once the area began to develop, the small water body which had a spread up to the Thyagaraja Road disappeared and new houses and structures of cement and concrete came up all around, leaving an open place in the middle, where on one side the Mysuru City Corporation has a Mohalla office.

Similarly, the present Basaveshwara Road linking JSS Hospital in Fort Mohalla with Ramanuja Road in Vidyaranyapuram was called “Seeneeru Katte Beedi” or street. There must have been a water tank (katte) which provided sweet water to the residents there for drinking purposes. As the road lead to the ‘Katte’, it came to be known as “Seeneeru (Sihi Neeru) Katte Beedi” or street.

There were a couple of such tanks within the old city of Mysuru and in particular in low lying areas providing water to the local residents about a century or two ago.

In Devaraja Mohalla, from Dewan’s Road, where it connects Dhanvanthri Road, up to Shivarampet Main Road, there is a Kothwal Ramaiah Street. Ramaiah was a Kothwal. Kothwal means Policeman. Kothwals were present during the middle of 1800s when Maharaja Krishnaraja Wadiyar III was reigning. The Head Kothwal had magisterial powers equal to those of an Amildar.

B.L. Rice in his book, “Mysore in General”, writes, “The Bangalore Police was reorganised in 1861 and the Head Kothwal made Sir Amin, with magisterial powers equal to those of an Amildar,” Ramaiah was one such Kothwal in Shivarampet. The near-by Jeevannarayana Katte was a water body then. Rain water flowed down from the upper levels and filled up the low-lying tank during the rainy season. People living around were going to the tank in the early hours of the morning to take a bath and fetch water to their homes. As there was no piped water supply those days, people residing in different localities had to depend upon the nearby tanks for water and that was the reason Mysuru had many tanks and channels.

The Kothwal kept a watch at such places to ensure the safety of people, particularly women who went early to the tanks. Generally, he was from the same area. Ramaiah was one such policeman who ensured safety of the people residing near Jeevannarayana Katte.

It was earlier known as Devaparthiva Agrahara Ane Sarot Street, behind Mannar’s Market in Shivarampet, links Dufferin Clock Tower in Devaraja Mohalla. It is a busy commercial street today running via Boti Bazaar. It is not clear how this street came to be known as “Ane Sarot Street.” However, as the very name indicates, Muslim residents in this area were perhaps either making elephant-drawn chariots, as we see one being taken out in  Vijayadashami procession on the last day of Dasara, or were good in repairing and restoring them.

‘Veene Shamanna Road’ at Old Agrahara near Agrahara Circle is dedicated to Veene Shamanna who was the court musician in Mysore and Tanjavoor. Shamanna was one of the renowned musicians of the Mysore Royal Durbar over 300 years ago.

There are many interesting anecdotes about Shamanna’s proficiency in music. Once a prominent visiting musician from the Northern part of the land came to Mysore Palace and threw a challenge to beat him by playing a ‘Shatkaala Pallavi’ on Jalatarangam.

Shamanna took up the challenge and played the ‘Shatkaala Pallavi’ and played a few more Pallavis, baffling the musician from the North who quietly left the place, accepting defeat. The Maharaja honoured Shamanna with a cash award of 1,500 Varahas.

Turab Ali and his Machine Gun

Turab Ali was only about 18 years old when he joined the Service. His intelligence and energy provided him opportunities to secure rapidly higher and higher positions and he left for active service to Egypt in October 1914. On arrival, he was detailed to undergo machine gun training and scarcely a week-old at this course his skill came to be tested during an attack on a Turkish redoubt at Belel-Mahadat. By the time Turab Ali fired 300 rounds out of his machine-gun, the gun got jammed. But the fire was so effective that those who survived beat a hasty retreat.

Turab Ali got his commission as Jamadar in January 1915 and was placed in charge of a machine-gun section. From then on, he actively took part in every engagement in which his regiment took part and specially distinguished himself in the attack upon Gaza in Palestine. He was for some time appointed instructor of the 15th machine-guns squadron. He trained two sub-sections of the Bikaner Camel Corps and Jodhpur Imperial Service Lancers.

Turab Ali accompanied the Imperial Service Cavalry Brigade to the Palestinian city of Jericho and took part in several engagements. For the display of gallantry and devotion to duty, his name was mentioned in despatches.  He also took a conspicuous part in the capture of Haifa in Israel. Under a heavy fire of machine-gun and artillery, he led an attack upon a hillock capturing a Turkish officer, four machine-guns and other booty. One of these guns was brought to India by the regiment as a war trophy.

For these distinguished services, Turab Ali was awarded the Indian Order of Merit and the Maharaja promoted him to the position of a Risaldar. Turab Ali’s historic background lies hidden in the street named after him, very few knowing his valour and fame.

The Nawab who brought Fire

Another street which has a historic background in Mandi Mohalla is the Benki Nawab Street. This street is named after Muhammad Reza, who was senior military commander in Tipu’s army. This Sirdar was famous as ‘Benki Nawab’ or ‘Binki Nawab’. The word ‘Benki’ in Kannada literary means ‘fire’, as we know.

Muhammad Reza was terror to the enemies as he brought fire and destruction to them. He caused devastation wherever he fought, and burnt alive the captured people in Malabar, apart from other enemies. While fighting against the British and their allies, he was killed at the battle of Siddheswar on March 5, 1799, two months prior to the defeat Tipu faced in the 4th Mysore War against the British and met an end. Subsequently, Benki Nawab’s family and relatives settled down in Mandi Mohalla and the road came to be known after him.

Writing about him in the History of the Sultan, Mir Hussain Kirmani records in 1802, “The troops of the Sultan, however, still followed them and vigorously attacking them again, strained every nerve to rout and destroy them. At this critical period Muhammad Raza, Mir Maran, having by much entreaty obtained from the presence leave to charge, proceeded with his division like a raging lion towards the enemy, and stretching forth the arm of valour, it went near that the whole of the enemy’s army was cut up and destroyed.”

29 COMMENTS ON THIS POST To “Street Stories: What’s in a Street? Name and Fame”