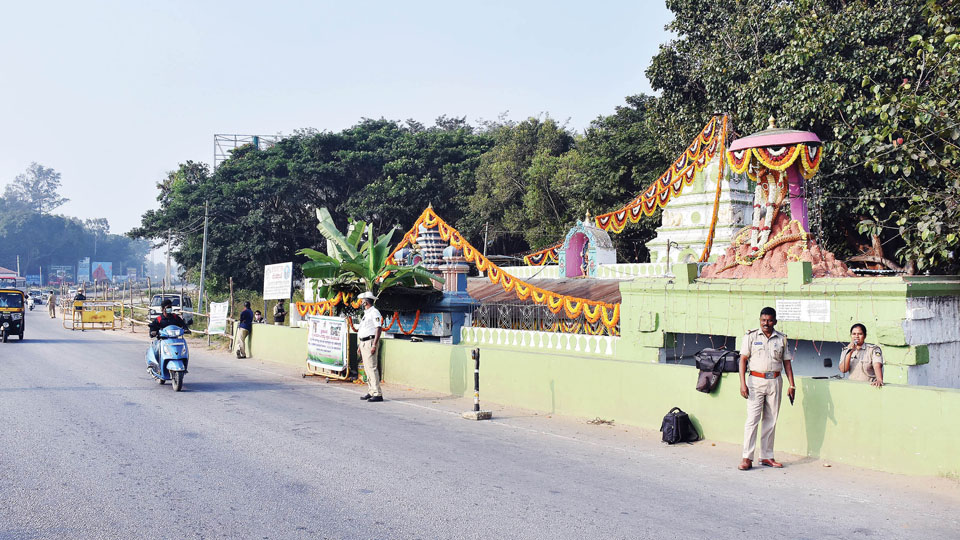 Mysore/Mysuru: Today is Subramanya Shashti and the famed Sri Subramanyeshwara Swamy Temple at Siddalingapura on Mysuru-Bengaluru Highway that usually buzzes with activity wore a deserted look as the District Administration had banned the entry of devotees due to COVID-19 epidemic. Subramanya Shashti is a big festival in the Margashira Maasa dedicated to Lord Subramanya. Priests call it Skanda Shashti.

Instead of devotees, a large number of Policemen were present in and around the Temple to prevent the entry of devotees from early in the morning. Usually, devotees throng the temple before the day breaks    on this festival day. But this morning, they stayed away from the Temple and instead offered their prayers from the other side of the Highway.

Usually, hundreds of stalls selling puja items, sweets, snacks, puffed rice, toys and household articles are put up on both sides of the Highway and unable to manage the crowd on this day, the Police usually divert the traffic for the whole day. But this morning there was no such scene. Police guarded the Temple and not a single devotee was allowed inside. But rituals inside the Temple were carried out in a traditional manner. The Shashti rituals began as early as 4 am, with a team of priests led by the Temple Chief Priest M.V. Subramanya performing Panchamrutha Abhisheka, Rudrabhisheka, Sahasranamarchane and Ashtavadhana Seve.

From the Treasury, the Temple authorities had brought the three feet tall silver Nagabharana that has a snake figure with seven heads.

The Nagabharana was donated to the Temple in 1973 by Jayachamaraja Wadiyar following the birth of Srikantadatta Narasimharaja Wadiyar. This silver valuable is displayed only once in a year during Subramanya Shashti at Siddalingapura.

The team of over 30 to 40 Policemen had a tough time in controlling the devotees as they lined up to pray from the opposite side of the Temple as the Temple premises was out of bounds. Devotees were seen stopping their vehicles on the opposite side and praying to the Lord. This at times caused traffic jams.

Announcements were made using mike sets by Police warning people not to stop their vehicles and even cases were booked after clicking the photos of violating vehicles.

As the main Temple was closely guarded by the Police, devotees were seen praying to couple of anthills located in the 500-metre surroundings of the Temple.

A mini-fair was witnessed here with people queuing up to pray and also merchants selling snacks, flowers and puffed rice. Devotees could leisurely park their vehicles as the road is being widened into a 10-lane Highway. After performing the rituals, the devotees were seen heading back to their homes.