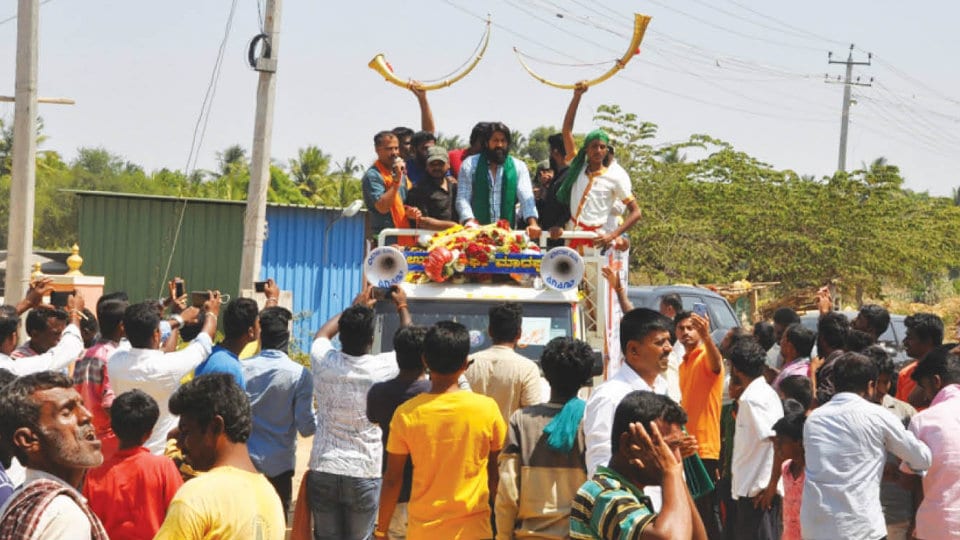 Pandavapura:  Sandalwood actor Yash, who is on a campaign trail, yesterday appealed to the voters to elect independent candidate Sumalatha Ambarish to the Parliament.

Speaking after conducting road shows in an open jeep in various villages, he termed this election as a prestige issue and self-respect of the people of Mandya. “Sumalatha wishes to serve the people and hence is contesting the polls,” he  said.

Accusing her political opponents for fielding three more ‘Sumalathas’ in this election to  confuse the voters, he asked the villagers to vote for serial number 20 independent candidate Sumalatha  Ambarish whose election symbol is ‘Farmer blowing trumpet’.

Sumalatha must win to save self-respect of Mandya: Actor Darshan

Challenging Star Darshan  called upon people of the constituency to elect independent candidate Sumalatha Ambarish with a huge margin of votes to save the self-respect of the people of Mandya.

Making an emotional appeal after conducting road shows at various villages of Nagamangala segment including Cheenya and Honakere yesterday, he wanted the people of the constituency to give a chance to Sumalatha.

Earlier, villagers of Cheenya of Honakere hobli gave a rousing welcome to Darshan when he entered their village at 11 am and chanted slogans ‘D. Boss.’  They brought their beloved actor on a bullock cart after taking out a procession from Srirangapatna – Jewargi State Highway to Cheenya Circle and showered flower petals on the actor.

Interestingly, various Congress leaders and workers took part in the campaign along with BJP workers defying the diktat of their high command leaders.  They waved Congress and BJP flags during the campaign.

Traffic came to grinding halt for some time in the evening on Bengaluru-Mangaluru NH near Kadabahalli when Darshan and supporters arrived to the spot.

Rumours of miscreants pelting stones on Darshan’s car were reported from Anchechittanahalli in Nagamangala taluk. But they vanished in the dark after throwing stones.  However, Police sources denied any such incident took place.