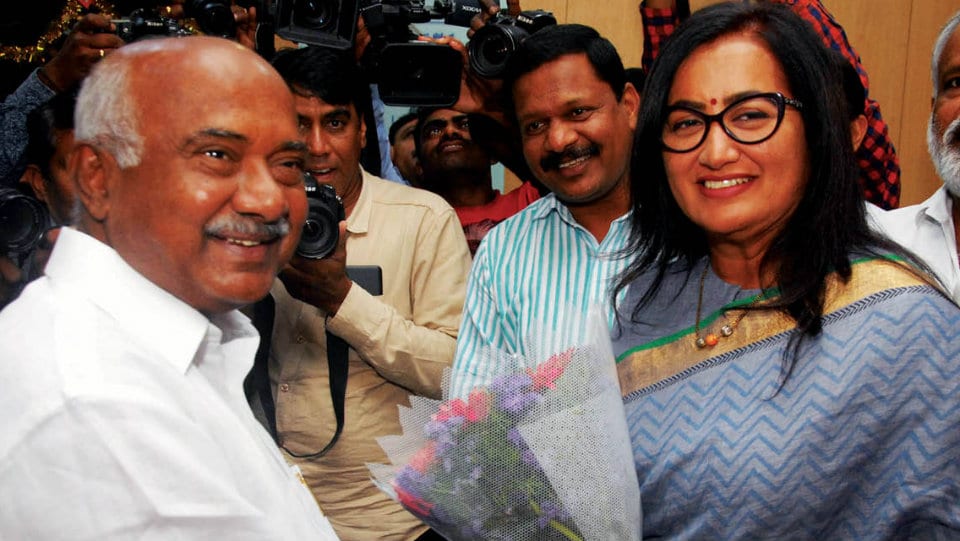 Bengalur: Maintaining that if elected as an MP she would prioritise development of Mandya villages which are neglected due to political animosity, independent candidate Sumalatha Ambarish, wife of late actor-turned-politician Ambarish, has said that she is in Mandya to fulfil the dreams of  her late husband.

Speaking at an interaction meet jointly organised by Bengaluru Reporters Guild and Press Club here on Thursday, Sumalatha said she could not tour Mandya when her husband Ambarish was alive. But now as she is touring the entire Mandya LS constituency, she is coming across many villages which are woefully lacking in basic amenities.

Stating that political animosity was the main reason for the backwardness of theses villages, she said that Ambarish would have become the Chief Minister of the State had he gone about on his political career in a more organised manner.

Claiming that she is contesting the polls after jumping into politics without much preparations, Sumalatha said Congress workers were voluntarily coming forward to support her and she cannot say no to them.

Stating that the Congress did not consult the workers before entering into a poll pact with the JD(S), she said that Congress workers were in no mood to support the JD(S) candidat in Mandya.

Pointing out that initially she was in a dilemma whether she had taken the right decision to plunge into politics, Sumalatha said that as she went campaigning, she felt that her decision was right.

Asserting that she would work honestly for the welfare of the people, Sumalatha said that she was feeling the pressure while contesting as an independent candidate. But she was confident of victory in the polls as she was getting tremendous response from the people, she said.